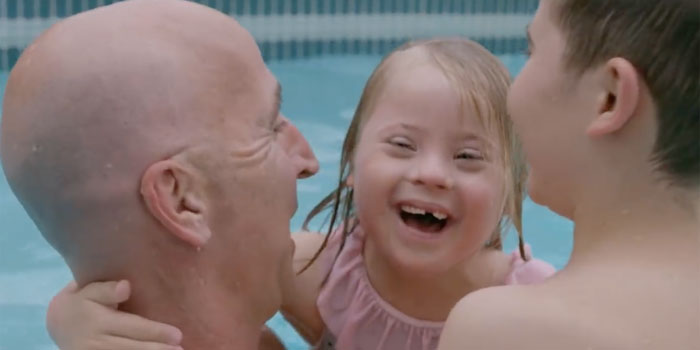 Just in time for Mother’s Day, Teleflora has released an ad celebrating what one mother learned when she gave birth to a daughter with Down syndrome. Part of Teleflora’s “Love Makes a Mom” campaign, the video has already garnered more than 1.5 million views on YouTube since its release on April 30th. Teleflora states on its blog:

… Eleven weeks into her pregnancy, Cara was told that there was a very good chance that the little girl she wanted so badly would have Down Syndrome. While Cara knew she would love her daughter, she worried that she was not equipped to be the mom her baby needed. Now, seven years later, Mia is the life of the party and the heart of the family.

According to the blog, Cara, an ER nurse, is very empathetic — but she believes her daughter is even more so:

She has said that Mia knows what everyone needs (i.e. a hug or a kiss) even when they don’t know it. In raising Mia, Cara’s own view on motherhood and what the “perfect family” looks like has changed. Mia is the glue that holds her family together. Or as her big brother Jack Jr. would say, “Mia is the patty in the Armstrong family hamburger.”

Cara says in the video below that she had always wanted ‘the perfect family.” But “when Mia was born, the doctor came in and said, ‘I’m so sorry.'” She adds, “I didn’t doubt that I would love my baby, but I doubted that I was the right woman for the job.”

Cara soon discovered that Mia was sent “to change my heart, and to show me a different kind of perfect.”

People like Mia, who have Down syndrome, are proving every day that they are just as talented and as valuable as everyone else. Charlotte Fien has addressed the United Nations on more than one occasion, advocating for people with Down syndrome. Blake Pyron owns his own business in Texas. Ryan Pittman has a heart for missionary work. Mikayla Holmgren competed in the Miss USA pageant. Valerio Catoia saved a young girl from drowning. Many other people with Down syndrome are going to school every day, participating in extracurricular activities, and working at jobs. They are contributing to society in positive and meaningful ways, and they have much to teach us.

In a world that purports to value diversity, “a different kind of perfect,” found in people who are differently-abled, truly fits right in and should be welcomed with joy.