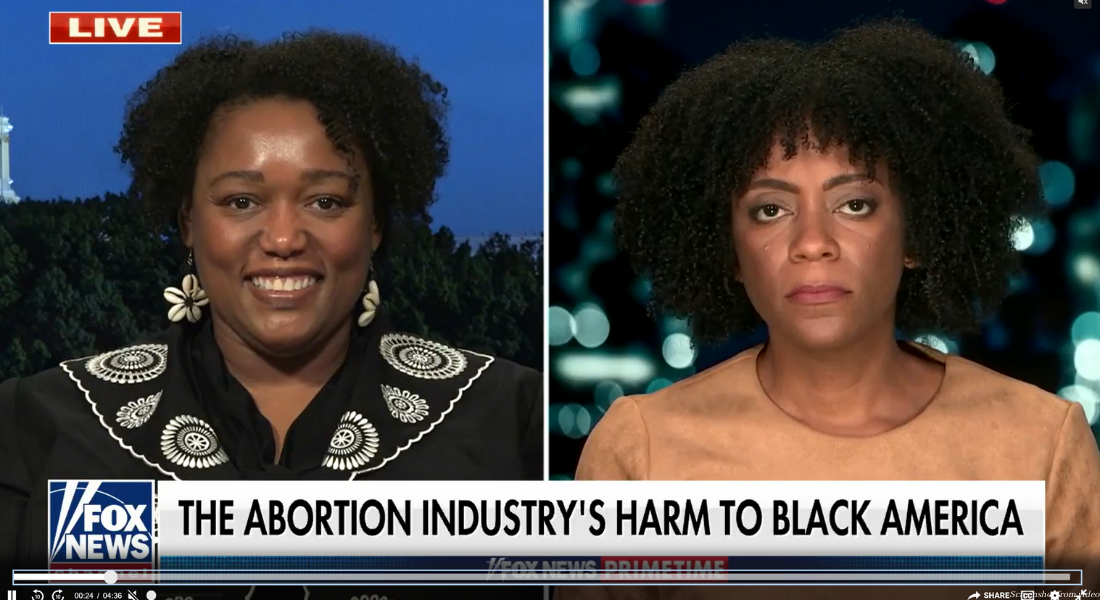 On an October 9 Fox News Primetime segment. Gloria Purvis, host of The Gloria Purvis Podcast, commented on disturbing cultural attitudes regarding abortion and Black women, while Live Action spokeswoman Christina Bennett offered a personal testimony about abortion’s role in the life of someone very close to her.

“First of all, killing the poor is not a solution to poverty,” Purvis began. “Number one. I hear so many arguments for why black women need access to abortion so that they can rise up out of poverty, and that’s just a lie.” She spoke about her own pro-life work within the Black community, saying, “We know that the Black community is not some abortion-loving community, no matter how much the abortion industry tries to put a Black face on their advertisements. We cherish our families, we want to have living wages to support our families.”

Purvis’ words echoed comments by Louisiana state Senator Katrina Jackson in a recent interview with EWTN Pro-Life Weekly. “I’ve never been in a group of African Americans who asked me to fund abortion,” Jackson said, arguing that her Black constituents are instead “still screaming for equitable education and access to healthcare.”

READ: How injustice in the Black community has contributed to skyrocketing Black abortions

In contrast to messaging that promotes abortion rather than offering real assistance and help for Black women, Purvis emphasizes that both women and men need support and encouragement. “I go in and offer that in the communities,” she said. “And oftentimes that’s just what people need to hear — that ‘you can do this’ and ‘we’re here to support you with that, through the birth and even after with any kind of material support and friendship that you would need.'”

She again emphasized, “But again, killing the poor is not a solution to poverty.”

Bennett shared the story of how her own mother “walked out of her abortion appointment in Hartford, Connecticut, at Mount Sinai Hospital” all because “a janitor talked to her when she was in the hallway, in a hospital robe, about to have an abortion.” The janitor told Bennett’s mother that “God would give her the strength to have me.” Though the abortionist pressured Bennett’s mother to go through with the abortion because she had already paid and wouldn’t get her money back, “she ran out, and saved my life.”

Bennett continued, “I love to tell my story because it really puts a personal face to the issue of abortion because oftentimes with abortion people are trying to devalue and dehumanize the unborn. I like to tell my story so that people can connect with the reality that I am a human being and I was in the womb, as well.”

Purvis then shared the core content of the message she offers in the Black community. “What we’re proposing to people is a way to love themselves, to love their children, to have bonds between the father and the mother and the baby,” she said. “Abortion puts forward actually that there’s something inherently defective about women because we can get pregnant and have children and I reject that argument. There is nothing wrong with women. In fact, I support a woman’s right to be born.”

“Abortion teaches men that violence against women and their unborn children is okay, and that is precisely against what we as women want for how we should be treated and for how men should be taught to treat us,” Purvis concluded.

Purvis, Bennett, and other Black pro-life leaders are increasingly speaking out about the ways that abortion harms women, and they’re passionately advocating for real solutions to the problems that drive many Black women to choose abortion.

Black pro-life Cherilyn Holloway activist stated, ““[Society is] saying that women should have a choice […] but if these women are making these choices because they feel like they don’t have any other choice then there’s something in the environment, in the economic system that’s not supporting motherhood. Abortion is a Band-Aid and we need to figure out how these women got wounded and why they’re bleeding.”