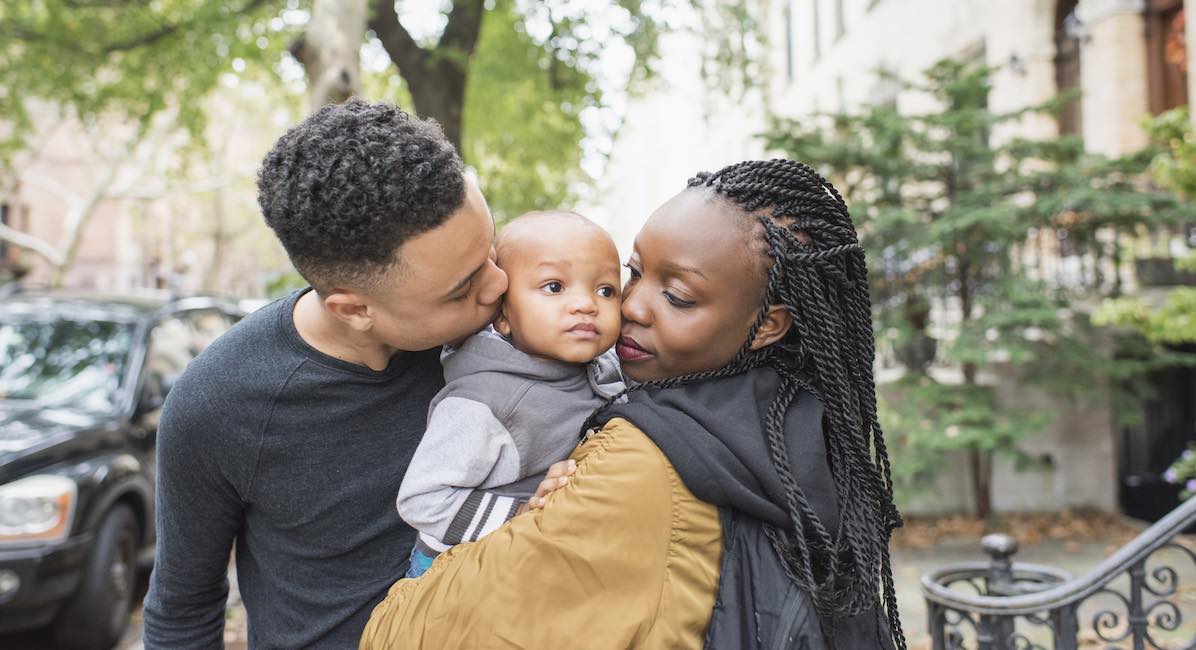 Black History Month is a time to elevate African Americans who have made an impact on American society despite the odds stacked against them. Names such as Frederick Douglass, Booker T. Washington, Harriet Tubman, and Martin Luther King, Jr. are familiar names that come to mind. But it is important to reach beyond the popular names to appreciate others who have made monumental contributions to our history as well — names like Dr. Dolores Grier, a pro-life advocate who spoke boldly about the genocide facing the Black community. She said, “We’ve been asking for the right to decent housing, the right to education, in fact, the right to healthcare. All we’ve been given free of charge is the right to kill our unborn child… It is demeaning to the Black woman because when you wanted us, in other words when we were on the plantation, you snatched the newborn baby from my arms and sold it into slavery. Today, you cut it out of the womb and throw it in the garbage.”

Years later, this is the very same message I am speaking about the Black community today.

We have seen little, if any, movement on the genocide that we have been convinced to enact on ourselves through abortion. Somehow, the Black community continues to downplay abortion in favor of more popular social justice issues. I was recently told that the pro-life work I do is meaningless because I do not have foster children or adopted children in my home. Personally, I am tired of the argument that as a pro-life advocate, I need to fix all the other cares of the world before I can defend and protect the lives of the thousands of vulnerable human beings who are killed every day through abortion.

I have been vulnerable with my own past mistakes and failures. In a social media world of seemingly picture-perfect lives, I choose to expose my pain and my brokenness. I believe people — especially young people — are longing for authenticity. Recently, I stood in front of a few hundred students and shared the story about how, when I was in high school, I ended the life of my unborn child. Sharing my story of regret has made me realize that sadly, I am not alone. And that is why I speak about two of the most controversial topics that face our culture: abortion and race.

When I speak, it is not only my story I share, but the story of how the Black community has been devastated by the abortion industry, especially by Planned Parenthood, which has targeted the Black community with the goal of minimizing our mark in this world. But even though Black leaders have for decades warned of Black genocide at the hands of this predatory industry, many still refuse to listen.

We live in a time where the Black community now has more powerful influencers than ever before. Musicians like Lecrae and poets like Amanda Gorman use their platforms to advocate for and against issues they believe are important. But in hearing their beliefs about abortion, it is evident that they do not understand the seriousness of the impact abortion is having on the Black community. We are dying out. The Black community currently makes up 13% of the population in the United States, but Black women are having 34% of all abortions.

Jackie Hill-Perry, author of “Gay Girl, Good God: The Story of Who I Was, and Who God has Always Been,” who just six years ago penned an incredibly pro-life article, recently tweeted this: 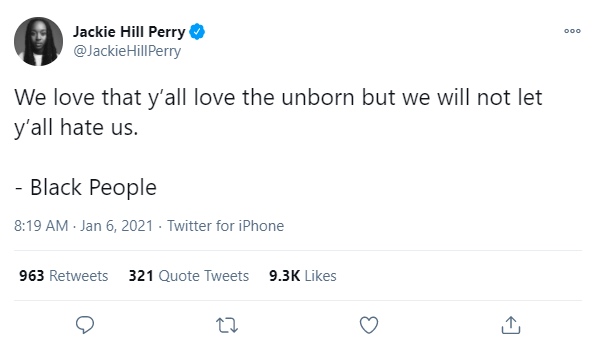 She later clarified what she meant, writing:

What it does mean is:

1: What I value (love) about many white evangelicals is there unabated commitment to the lives of the unborn. That is the heart of God, so to that, I say ‘Yes!’ And ‘Amen!’ Continue to speak up for those that can’t speak up for themselves. Please.

2: What I am grieved by and will not allow is the hatred, mistreatment, and dishonoring (systemically & interpersonally) of black people outside of the womb. And the way America is set up, our lives here don’t seem to matter as much once we’re born.

Does she feel that those who are working to protect unborn Black babies hate them after they are born? This is certainly not the case, at least for me and for those I know in the movement. The pro-life movement is about walking alongside mothers and their babies, making sure they have everything they need through birth and beyond. Is this road an easy one? No, it is not. And the pro-life movement recognizes that there is more involved in the process of supporting families than simply ensuring that children have a right to be born. But the right to life must be our starting point.

Despite this, many so-called influencers preach that until other social injustices are made right, we cannot address abortion. I do not agree. Thinking back on those we celebrate this month, we must ask, did they wait for things to align before advocating? Did Dr. Martin Luther King, Jr. wait for the clutter to clear before spearheading his movement? Or did he dive in despite the obstacles and advocate?

Did Dr. Mildred Jefferson, the first Black woman to graduate from Harvard, wait for her pro-life stance to become popular opinion before stating, “The unborn child cannot escape, cannot riot in the streets, and cannot vote… I became a physician to help save lives, not to destroy them”? No. She did not. She powered through with her message, despite its unpopularity, because it was the right thing for her to do for our society.

I live my life advocating for the unborn not because it is an easy path, and certainly not because it is popular to do so; I advocate because this is what I am called to do. I have seen the ugly truth of abortion. I have sat with others whose guilt felt too heavy a burden to carry. I’ve seen the faces and the consequences of abortion. And I have heard the excuses from many who refuse to address the crisis of abortion in the Black community. Their message is not one that I wish to spread or the mark I wish to leave.

It is not difficult to see the division and pain in our culture. It is easy to look outside ourselves and point to reasons why we feel things are not working — but real, effective change starts within us. We have to educate and ask the tough questions of ourselves, focusing on the real facts, not the platitudes that people are shouting at us. It is only by facing the ugly truths that we will be able to see real change.

Bio: Toni McFadden is the founder of Relationships Matter and the Minority Outreach and Healthy Relationship Director for Students for Life of America. Follow her on Instagram here.