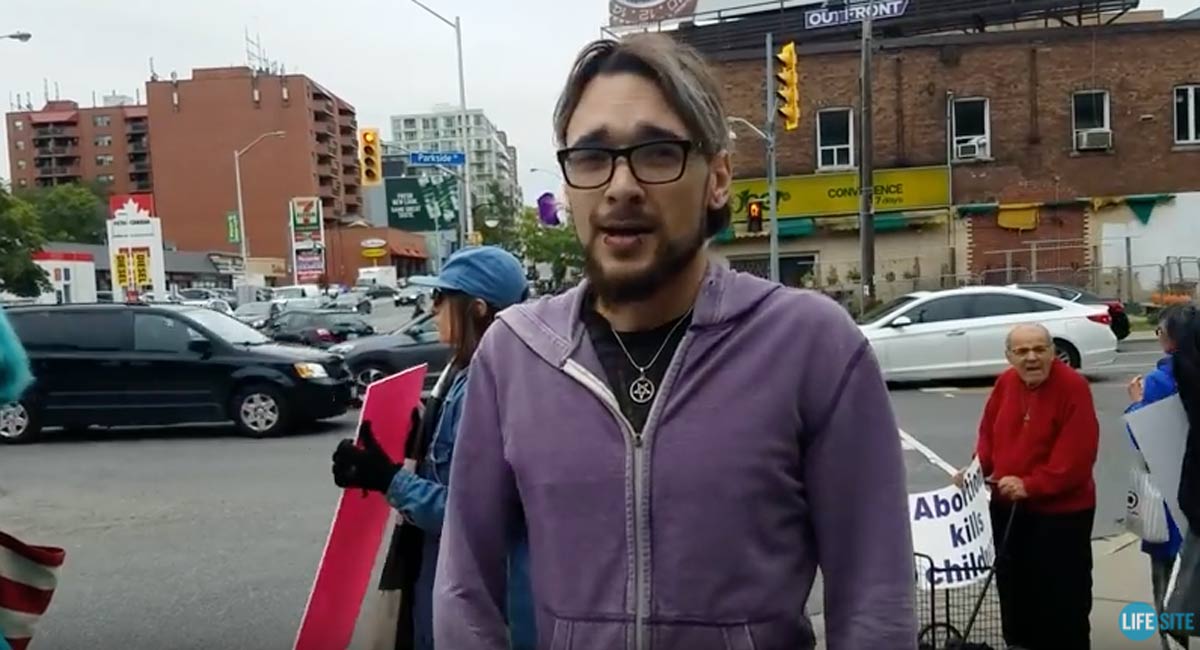 UPDATE, 10/4: Jordan Hunt has taken to Twitter, unapologetically stating that he believes violence toward pro-lifers is completely acceptable.

UPDATE 10/3, 6:03 pm: The Human Defense Initiative has announced it has identified the assailant as Toronto hairdresser Jordan Hunt. He was reportedly employed, until today, as a “subcontractor” with Noble Studio 101 Hair Studio. The studio, when questioned by Human Defense about Hunt’s employment there, stated he was employed “[u]ntil today when I found out what happened today!!!! Not cool. He will never step foot in my studio again.” HDI reported that the studio posted on Instagram, stating, “We don’t condone his actions and he has been let go. We believe everyone has a right to an opinion and the right to voice their opinion without fear of physical violence.”

10/3: This weekend, Marie-Claire Bissonnette was participating in Life Chain in Canada, where thousands of pro-life men, women, and children stood on over 200 street corners in a peaceful and silent protest. Participants do not speak, but hold signs with messages like “Abortion Hurts Women,” “Abortion Kills Children,” “Adoption, the Loving Option,” and more. On Saturday, Bissonnette was with over 70 other pro-lifers when she was roundhouse kicked by a pro-abortion man.

One pro-abortion woman counter-protested alongside the pro-lifers, but did so peacefully. There were no problems until a man arrived at approximately 2:30 in the afternoon. He first began with acts of vandalism against the pro-lifers, writing on their signs. “After I warned people to shield their signs, he then proceeded to run up behind five of the participants (including a ten-year-old girl) and scribble with his markers on their backs, ruining their clothing,” Bissonnette wrote at LifeSiteNews. The pro-abortion woman who had been counter-protesting tried to discourage him, but he became further enraged when Bissonnette took out her cell phone and began to record him.

“He asked me whether a sixteen-year-old girl who gets pregnant after being raped should keep her baby. I attempted to explain that her baby should be treated no differently than a three-year-old child who may have been conceived by rape,” she recounted. “He then forcefully roundhouse-kicked me in the shoulder, which sent my phone flying and I yelled for someone to call the police. In defence of his violence he claimed he’d meant to kick my phone, and then, as a fellow Life Chain participant dialed 9-1-1, he yanked off the ribbon I’d been wearing on my chest and ran away, heading east on Bloor.”

Bissonnette’s attacker has not been identified, and police are still looking for him. Sadly, Bissonnette explained that this is not the first time she has faced violence from pro-abortion activists:

Rocks have been thrown at me. I’ve been spat upon multiple times and pushed. Men have aggressively asked how I would like it if they raped me and forced me to have an abortion.

Other pro-life women have likewise been victims of pro-abortion violence. Another Canadian pro-life woman was threatened with rape and assaulted on her college campus. Other pro-abortion extremists have used cars as weapons, trying to run over pro-lifers — a scary tactic that has become disturbingly common. Others have been attacked for trying to counsel others or for protesting abortion.

Through this rise in violence, the abortion industry and its defenders remain silent, refusing to denounce these abhorrent tactics. But then, if they’re willing to attack the most vulnerable among us — preborn children — then why would other violent acts bother them?