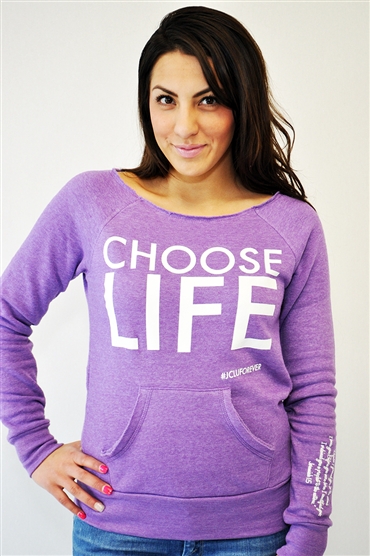 Mechelle Hall has an incredible story that the mainstream media has completely ignored. She is a young woman who got pregnant and was going to have an abortion. On the way in, she had an altercation with some pro-life protesters:

Reached at her northern Wisconsin home Tuesday evening, Leah Winandy, 21, said she was protesting abortions on behalf of Pro Life Ministries of Duluth and handing out pamphlets on First Street outside the Building for Women when confronted by Hall.

“I was there to ask mothers not to kill their babies at the abortion clinic,” she said. “She [Hall] was walking toward me. She pulled out a knife and waved it at me saying ‘Don’t come near me.’ I said, ‘Please don’t kill your baby. Fear God.’ I came to the edge of the courtyard. I said, ‘Look and listen to your ultrasound.’ She turned around and came back with a knife and held it up to my throat.”

She was arrested and pleaded guilty to assault. But the story takes an unusual turn. Despite her assault against the pro-life protester, she didn’t get the abortion. Now, she’s thankful for Leah and Sarah Winandy’s intervention.

Mechelle Hall dabbed tears from her eyes Tuesday as she pleaded guilty to second-degree assault for brandishing a knife and threatening a woman who urged her not to get an abortion.

Yet, she revealed later, she never got it.

Hall, 26, of Superior, admitted her crime in a St. Louis County courtroom under questioning by county prosecutor Nathaniel Stumme. Public defender Laura Zimm told Judge David Johnson that, under terms of a plea agreement, Hall would receive probation and wouldn’t have to serve any jail time. It was a routine, perfunctory court hearing.

The surprise came when Hall was reached by phone at her Superior home Tuesday evening. She said she never had the planned abortion. Hall said she decided to keep the baby after being confronted by anti-abortion protesters Leah Winandy and her mother, Sarah, on Nov. 24. She said she was stressed out and they made her realize that she didn’t want to end the life she was carrying inside her.

Hall was asked if there was anything she’d like to say to the Winandys.

Leah Winandy has forgiven Mechelle and agreed to her sentence of probation.

Winandy said she was contacted by the St. Louis County Attorney’s Office and asked if she would be agreeable to Hall receiving probation instead of a guideline prison sentence. She agreed.

“I forgive Mechelle for what she did; I do forgive her because God has given me forgiveness in my heart for her,” Winandy said.

All in all, I thought that it was a pretty incredible story. My heart just goes out to Mechelle. What she did in assaulting Leah Winandy was, of course, absolutely wrong. But imagine how she must have been feeling at the time: lost, confused, angry, scared, hurt. Someone tried to tell her she had another option and she lashed out. But Leah forgave her, which certainly defies the stereotype pro-choicers have created of abortion clinic protesters. They’d like you to think that pro-lifers are wild-eyed, crazy, Bible-thumping religious whack jobs. They don’t want people to see the peace and forgiveness that lives in the pro-life movement. They don’t want women contemplating abortion to realize that pro-lifers will be there for you with open arms. They want women considering abortion to think of pro-life activists as mean, crazy people so that the woman will be afraid to talk to them. What feminists and liberals don’t realize — or conveniently ignore — is that pro-lifers tend to be Christians who love God and simply want to protect life. They’ll be there for you if you decide to change your mind and they’ll be there to help you heal if you’ve had an abortion. They don’t judge you, and they don’t hate you.

But if you’re pro-abortion, you’ve always got to find a way to poke holes in the decision of a woman to choose life. And the feminists are already coming out of the woodwork to howl in anger about this story. Amanda Marcotte tweeted about it, calling Mechelle Hall crazy and unstable:

Convincing unstable, violent women to have children, one crazy incident at a time. Good work, antis!

I didn’t see Mechelle Hall as unstable and violent. I saw her as scared and angry. I saw her as someone who knew that Leah Winandy was speaking the truth but was afraid to listen. So many women who are facing abortion feel helpless and terrified. It doesn’t make them crazy. And Mechelle Hall had probably been filled with warnings about the crazy anti-abortion protesters who would yell and scream at her, who would try to stop her from having her abortion. When someone feels defensive, scared, and helpless, it’s not a surprise when they lash out.

And what is Amanda Marcotte’s point, anyway? That certain people shouldn’t be allowed to have children and should have mandated abortions if they get pregnant? Does that really sound like someone who is fighting for choice?

Salon also chimed in on this one, with a rather strange argument against this story. The writer, Tracy Clark-Flory, didn’t like how this story went. So she decides that it was just all made up. Seriously:

It’s a total anti-choicer’s wet dream. Much like Abby Johnson’s incredibly unreliable tale of converting from Planned Parenthood clinic director to antiabortion protester, this story plays to the anti-choice mythology that pro-choicers will convert if only they’re exposed to the reality of abortion. Activists believe themselves to be preaching the truth and many will take whatever means necessary to spread the word. This just serves as a dangerous message: Take things far enough, push women to their breaking point, and you’ll change their minds! This is already a favored tactic — the picket lines at besieged clinics can resemble a ghastly Halloween procession, what with the grim reaper costumes and gruesome images of aborted fetuses — and Hall’s about-face just offers further reinforcement.

After the Abby Johnson yarn, any “pro-life” conversion story should be met with a healthy dose of skepticism (and I’ve got plenty of extra doses, if anyone is lacking). I would love to pull at the pretty little bow that has been metaphorically placed on this case, but, unfortunately, Hall hasn’t returned my calls for comment.

Right. There’s definitely some kind of problem with this story, and it just must be a fake. Why would anyone change their mind about murdering their baby?

It’s interesting how angry pro-choicers get when someone actually exercises the right to choose that pro-choicers claim to be fighting for… and don’t choose what pro-choicers want them to choose. A woman decides to cancel her abortion, and feminists scream with outrage. It doesn’t really seem to me that giving women a choice is what they’re after. They want women to make their choice… which is to always choose an abortion.

Mechelle Hall made a terrible choice in assaulting Leah Winandy. But I don’t know that it makes her some kind of violent, unstable person. If she had a history of violent behavior, then clearly she wouldn’t be sentenced to just probation with no jail time served. I’m glad she chose to give her baby a chance at life, and hopefully, she’s been able to find peace.