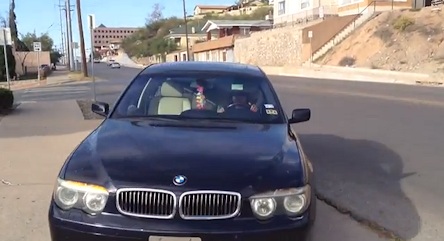 Miguel Abaunza has a heart to pray for the unborn. Abaunza prays on the sidewalk near the Hilltop Women’s Reproductive Clinic in El Paso, Texas. He is a part of a local 40 Days for Life group in El Paso. On October 16, 2013, Gloria Martinez, the RN at the Hilltop clinic, drove her BMW directly towards Miguel in an attempt to run him over. The RN pressed on the brakes at the last second, rolled down her window, and told Miguel that “one of these days I am going to run over you.”

Miguel recorded the car coming towards him on video. He recorded her because this was not the first time Martinez had threatened him verbally or with her car. Abaunza was shaken up by the event and is concerned Martinez won’t stop the next time she drives towards him.

The 40 Days for Life El Paso group prays with families who bring their children near the clinic. Abaunza fears that Martinez’s attempts to slam into him could endanger the children. Others who’ve gone to the center to pray have also made reports that Martinez threatens them and yells explicit remarks. Abaunza has filed a report with local police over Martinez’s actions.

This is not the first time the police have been called to the clinic. Hilltop Women’s Reproductive clinic made El Paso news in 2011 when a dismembered fetus was found in a bag outside the clinic. A man who lived near the clinic told members of the “40 Days for Life El Paso” prayer group that he found a trash bag near the clinic. When the 40 Days for Life group arrived and opened the bag, they were shocked to find body parts. Gabriela Federico, the director of the group, told the news, “I’ve seen pictures and videos of abortions but nothing like this. To see with my own bare eyes to see how that child was mutilated, it was horrifying.”

The mutilated body, abortions done up to 15 weeks, and an attempt to run a man over show that this clinic is truly need of prayer. I’m thankful the 40 Days for Life group hasn’t left the grounds.

The group posted this Facebook message on Tuesday: “2 lives were saved today! Please pray for these courageous mothers!” It’s clear that even in the midst of opposition, prayers are being answered! Thanks for your brave stand, Miguel, and thanks to the 40 Days for Life El Paso group.