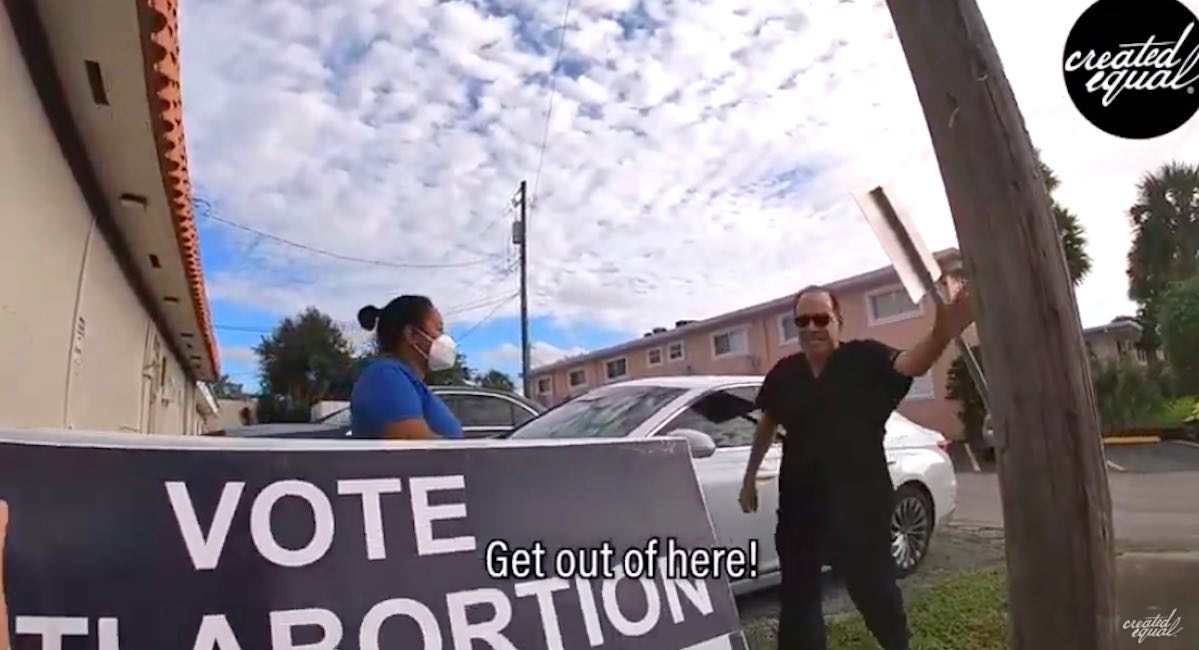 Pro-life sidewalk counselors from the organization Created Equal were standing on the sidewalk outside a Florida abortion business on Tuesday when the abortionist began screaming at them from his car, eventually parking and continuing the verbal assault as one of his own employees attempted to stop him.

Dr. Richard Friefeld, the owner of A Choice for Women in Miami, saw the pro-life sidewalk counselors standing on the public sidewalk adjacent to his facility, holding heartbreaking and graphic signs showing babies who had been killed by abortion. Friefeld became irate as he drove by the signs.

After speeding away, he is seen again on the video, driving up and parking in a parking spot right next to the sidewalk. He tells the pro-lifers that they are on his property and that they are breaking the law, and threatens to call the police to have the peaceful activists removed from the public sidewalk.

As he parks, an abortion worker dressed in scrubs addresses the pro-life activists, suggesting that they back up. Friefeld gets out of his car and screams, “Get off my land right now! Get out of here! Get out of here!” He moves towards the pro-lifers and attempts to kick one of their signs as the employee puts herself between Friefeld and the pro-lifers. She tells him that he is being filmed and urges him to stop his behavior, but he doesn’t listen. He continues to claim that the pro-lifers are on his private property.

“I don’t care what he’s filming,” said Friefeld. “I’m right and he’s wrong.” He instructs another employee who is off-camera to call the police. “You can’t do this to people! Disgusting people! Go to hell!” he said as he walked into the facility.

According to a pro-lifer speaking at the end of the video, the police were called and the pro-lifers were told they were on a public sidewalk and within their rights to be there.

Friefeld’s behavior is unfortunately all too common among abortion workers who take offense to pro-lifers who speak the truth about what abortion is and about what abortionists do for a living. Their job is only successful when an innocent human being is dead.

Sadly, pro-life sidewalk counselors have faced a range of assaults against them over the last several years. In 2014, a Planned Parenthood abortionist threatened to punch a pro-lifer “in the f***ing face,” and in October 2019, abortionist Dr. Ronald Yunis was arrested after he allegedly pulled a gun on pro-life activists. In November 2020, an abortion worker slapped a pro-life sidewalk counselor outside a New Mexico abortion facility.

Pro-lifers have had rocks thrown at them, been pushed, and even kicked, all because they were standing up for the right to life for preborn human beings.