Data on the number of abortion complications in the U.S. is sketchy at best, largely because there are no federal requirements requiring abortion complications to be reported. The two main reporting agencies for abortion data are the Centers for Disease Control (CDC) and Planned Parenthood’s former “special affiliate” and former research arm, the Guttmacher Institute. The CDC’s reports of abortion-related deaths are years behind, and they do not report overall complication numbers. Guttmacher, however, reports neither abortion-related deaths nor complications. Instead of reporting any of its own gathered data on abortion safety, the organization refers readers to a 2018 report from the National Academies of Sciences, Engineering and Medicine (NASEM) committee, which touts abortion’s supposed safety. What Guttmacher and others fail to mention is that the report was funded by abortion collaborators and organizations behind abortion expansion efforts. It would be unwise to trust such a source.

So who is reporting? According to the Guttmacher Institute, as of March 1, 2020, just 28 states “require providers to report postabortion complications.” These reports can vary by state — but several states have no abortion reporting requirements at all. So how can the abortion industry and its media friends reasonably claim abortion is safe?

State data on abortion complications is not consistent across the board, according Charlotte Lozier Institute (CLI) research associate Tessa Longbons, who has spent hours combing through each yearly report. Longbons told Live Action News that it’s difficult to compare state to state and year to year because states report inconsistently. “For example, some states collect data on all abortion complications while others only collect data on complications diagnosed while the woman is at the abortion center,” she said. She pointed out that even with reporting statutes on the books, many states have failed to enforce them.

The data and quotes below from Longbons’ research represents overall reported complications in various states. Note that in certain instances, there may be more than one complication associated with a single abortion.

“In 2017, a Planned Parenthood Arizona whistleblower who noticed a disturbing uptick in serious complications was fired after she brought her concerns to Planned Parenthood leadership. A jury later awarded her $3 million for wrongful termination.”

“Complication totals will likely be higher in subsequent reports now that the new complication reporting law is in effect.” 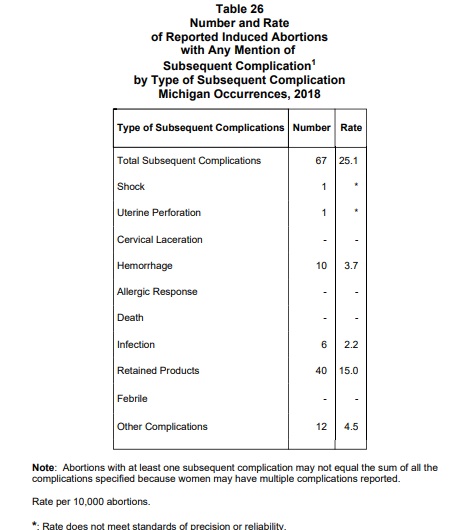 “Mississippi requires doctors to submit reports to the health department…However, Mississippi received no complication reports in 2014, 2015, 2016, or 2017, suggesting that complications are going unreported.” 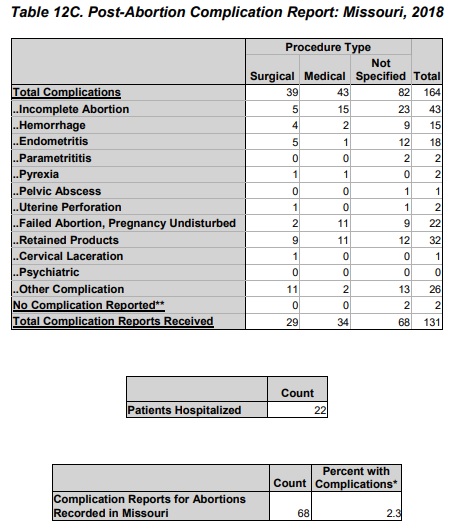 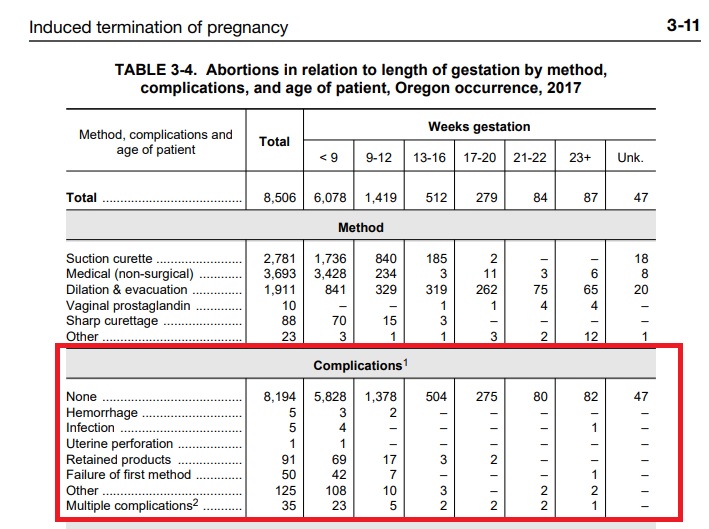 “South Dakota has no requirement that medical providers report abortion complications they encounter.“

“It was unknown whether the 566 abortions obtained by Texas residents in other states caused complications.” 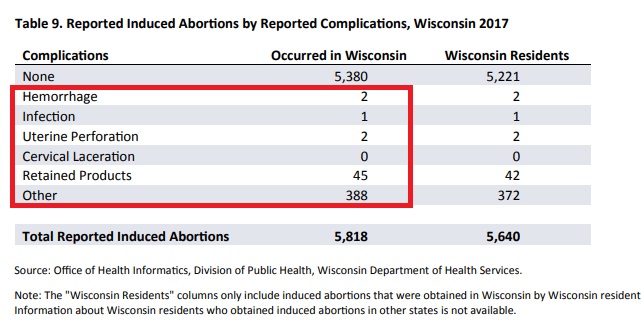 Longbons said that when states mandate and enforce reporting laws, the complication reports tend to climb, revealing the possibility that abortion complications are actually much higher.

Longbons mentioned Missouri as an example, telling Live Action News, “Missouri’s complication reporting law was on the books for decades, but was not enforced and complications weren’t reported. Now that they are enforcing it, they are discovering lots of abortion complications.” Longbons pointed out that the Charlotte Lozier Institute (CLI) discovered that in 2017 in states which require detailed reporting on the abortion pill (such as Ohio), “Chemical abortions have a much higher complication rate than surgical abortions performed at the same point in pregnancy and result in more frequent visits to the emergency room.” As of 2016, adverse effects associated with the abortion pill (not including deaths) are no longer required to be tracked by DANCO Laboratories — the abortion pill’s manufacturer — or by the generic abortion pill maker, GenBioPro.

In a report published online in 2019, Longbons and other authors wrote, “From a research perspective, it is clear that findings concerning the incidence and outcomes of abortion complications remain inconclusive, largely because of the demonstrably inadequate systems of abortion certification and reporting in the United States. Research from Finland and Denmark, countries with comprehensive systems for reporting abortions and other pregnancy outcomes, concluded that there is a 4 times greater risk of mortality following abortion than childbirth. These findings contrast with the often-referenced conclusion that childbirth-related mortality is 14 times that of abortion.” (emphasis added)

While abortion is touted as safe in the U.S., abortionists occasionally admit that serious complications are possible even in an early abortion. A look at abortion consent forms not only confirms the potential for serious risks but reveals that when a complication arises, the woman — not the abortion facility — may be held financially responsible for continued care once transferred to a hospital.