Prior to the 1973 Roe v. Wade court decision, each state had its own abortion laws. Many had laws on the books banning it completely, but others legalized it in some form well before 1973. Roe didn’t become Roe overnight. We can trace its roots back more than a decade prior. And as is usually the case with abortion, once an inch is given, so to speak, those in favor of it tend take a mile. Here’s where it began:

In 1959, the American Law Institute (A.L.I.), an organization of American lawyers and other elite members of the judiciary, whose mission was the reform of American law, proposed that therapeutic abortions should be legal. Although the first draft of the Model Penal Code to liberalize abortion was released on May 21, 1959, the final version was issued in 1962. 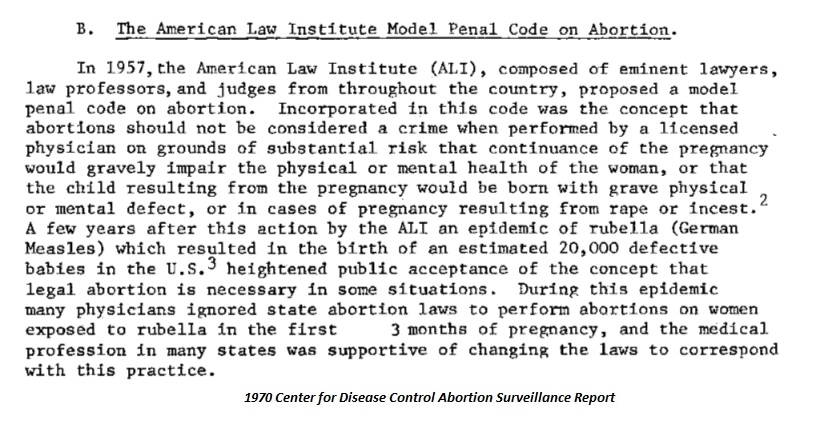 The law proposed that “[a] licensed physician is justified in terminating a pregnancy if he believes there is a substantial risk:

(1) When continuation of pregnancy would gravely impair the physical and mental health of the mother; or

(2) When the child might be born with grave physical or mental defect; or

(3) When the pregnancy resulted from rape, incest, or other felonious intercourse.”

The ALI’s Model Penal Code was the premise of the 1973 Supreme Court decision, Roe v. Wade. At that time a large percentage of states allowed abortion only when the woman’s life was endangered. By 1967, three states had liberalized it; according to Time.com, by 1968, four of five states—Colorado, North Carolina, Georgia and Maryland, had authorized it “if the child is likely to be born defective,” but “California did not sanction this ground because Governor Ronald Reagan threatened to veto any bill that included it.”

READ: Not just Nazis: The grisly history of research on abortion survivors

According to the Washington Post, “Through the mid-1960s, 44 states outlawed abortion in nearly all situations that did not threaten the life or health of the mother.”

In 1966, abortion was still illegal in all fifty states, according to Dr. and Mrs. John C. Willke. However, in 1966, Mississippi altered its existing law by adding rape as an indication for a hospital abortion, according to the CDC’s first abortion surveillance report in 1969. And, according to National Right To Life’s timeline, in 1954, Alabama permitted abortions for the mother’s physical health.

According to Dr. Willke, “The Bureau of Vital Statistics reported only 160 mothers had died from abortion in 1966 in the entire USA.”

1973: Abortion legalized nationwide by Supreme Court, with more than 600,000 abortions

After the U.S. Supreme Court decided to legalize abortion nationwide by a 7 to 2 decision in Roe v. Wade, the CDC Abortion Surveillance report from 1973 indicates that a total of 615,831 legal procedures were reported from 50 states and the District of Columbia and New York City. 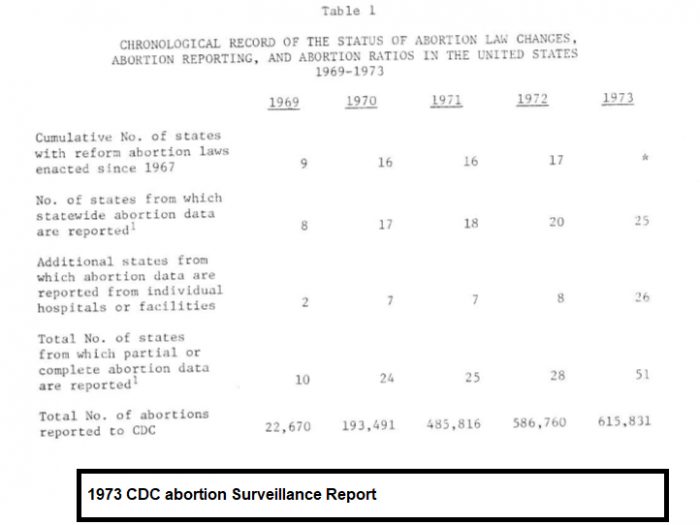 Alan F. Guttmacher, MD, who served as Planned Parenthood Federation of America’s president from 1962–1974, responded to the ruling by stating, “I think that to raise the dignity of woman and give her freedom of choice in this area is an extraordinary event. I think that Jan 22, 1973, will be a historic day.”

According to the CDC, in ten states, abortions outnumbered live births among teens 15 years and younger.

By race, the numbers broke down as follows:

At the time the initial report was filed, the CDC reported that 51 deaths related to legal, illegal, and spontaneous abortions had been reported in 1973, and 71 in 1972. However, those reports were eventually updated.

Live Action News has previously documented how the abortion lobby falsely claimed that hundreds of thousands of women died annually from illegal terminations, in a deliberate effort to push abortion on the nation. Standing in stark contrast to this is the breakdown of the estimated numbers going back to 1930. Clearly, the claims that hundreds of thousands of women were dying was a complete falsehood — and Dr. Bernard Nathanson, founder of NARAL, later admitted as much:

Roe v. Wade was filed by Norma McCorvey, known as ‘Roe,’ and was argued by Sarah Weddington. McCorvey would later admit that the claim that she had become pregnant through rape was fabricated. In fact, McCorvey’s child was never aborted. Her baby was born while the case was still being argued and she ultimately placed her child for adoption.

McCorvey became a staunch pro-life advocate and later expressed sorrow for her participation in the infamous court decision, working to overturn the case up until her passing in February of 2017 at the age of 69.

Click here for more details on state legalization prior to Roe.