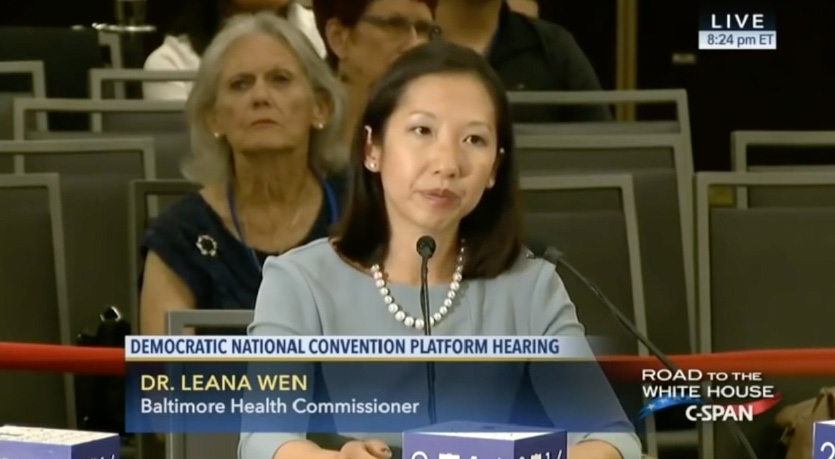 News that Planned Parenthood president Leana Wen had been ousted sent shockwaves around the country, with Wen claiming that her firing was determined during a “secret meeting” and was due to “philosophical differences” she had with the board of the abortion corporation.

Rumors are swirling about what caused her sudden departure — read more about that here — but recent statements including an op-ed she wrote for the Washington Post are very revealing… because they show that Wen didn’t really know Planned Parenthood at all.

In the article, Wen discussed suffering a miscarriage, saying it reaffirmed her dedication to abortion. “[I] also believed that fulfilling my deep desire to expand our family would send a strong message for the organization I represent: We support all people in their decisions when and whether to become parents,” she said of her pregnancy. “Then, just as suddenly as they’d come on, my nausea, exhaustion and other symptoms went away. I knew even before I went to my doctor that I’d had a pregnancy loss.” She spoke movingly of the emotions she grappled with afterwards, feeling numb and then, guilty, questioning if she had somehow caused the miscarriage. But then Wen attempted to link her feelings about her miscarriage to recent laws passed in Alabama, Missouri, and Georgia, which she claimed would mean women could be investigated for miscarriage — a claim Live Action News debunked here and here.

But does Planned Parenthood actually “support all people in their decisions when and whether to become parents”? Former Planned Parenthood employees say no. They say the abortion corporation discriminated against pregnant employees. According to a previous report from Live Action News, “more than a dozen current and former staffers and organizers of the Office and Professional Employees International Union… accused the abortion corporation ‘of sidelining, ousting or otherwise handicapping pregnant employees'” and of firing women shortly after giving birth, of ignoring doctor’s notes regarding pregnant staffers, of declining to hire women who were pregnant, and favoring employees who were less likely to become pregnant. In addition, prenatal services are practically nonexistent at Planned Parenthood, and they won’t even do ultrasounds for women who want to give birth to their babies. No, that service is reserved for abortion patients only.

In other words, Wen may have misjudged her employer. Planned Parenthood isn’t exactly supportive of pregnant women who want to be pregnant.

Wen, an emergency room physician, wanted to re-position Planned Parenthood as a health care provider, moving away from the political framing of the abortion debate. The statement she released after announcing her ouster said as much:

I believe that the way to protect abortion care is to be clear that it is not a political issue but a health care one, and that we can expand support for reproductive rights by finding common ground with the large majority of Americans who understand reproductive health care as the fundamental health care that it is.

I am leaving because the new Board Chairs and I have philosophical differences over the direction and future of Planned Parenthood.

Planned Parenthood has always publicly pushed the idea that its focus is health care, but it appears that having a medical doctor at the helm who wanted to increase the corporation’s actual, legitimate health care services was just too much for the abortion profiteer.

The New York Times reported there had been internal disagreements because Wen was not being politically aggressive enough on abortion, and there had been significant turnover since she was hired. Likewise, a January feature in Buzzfeed signaled there was trouble for Wen, noting that she was “only about two months into her tenure as the new head of Planned Parenthood, but she hit the ground running with this new campaign that sent the clear message: Planned Parenthood is first and foremost a health care organization, not a political symbol.”

“People aren’t coming to Planned Parenthood to make a political statement,” Wen said to Buzzfeed. “They’re coming because they need their vaccinations. They need their well woman exams. They’re getting HIV tests.”

Some people applauded Wen’s decision to move away from the aggressive political tone and abortion laser focus of former president Cecile Richards. “The hyper-political nature of Planned Parenthood in recent years has turned off many Americans who would ordinarily be more sympathetic to an organization that does so much to advance women’s health,” pollster Adam Probolsky told Buzzfeed. The news outlet also reported that Wen wanted Planned Parenthood to be a place where people could come to treat non-reproductive health care issues, ranging from “diet to depression to addiction.” Democrats, however, expressed concern.

“It’s a symbol of fatigue, the battle has been a tough one and they’re tired,” Hank Sheinkopf, a Democratic campaign consultant, told BuzzFeed. “If you publicly project that you’re no longer an advocate but a provider of medical services, the presumption is the bad guys will no longer beat you up because you’re no longer poking a stick in their eyes all the time.” Another Democratic strategist noted that this shift would make abortion advocates fighting “on the ground” feel “abandoned.”

The numbers have made it appallingly clear that Planned Parenthood is not a health care organization; under former president Cecile Richards’ leadership, abortions increased while health care services steadily decreased. Planned Parenthood performs less than 2 percent of all cancer screenings, less than 2 percent of all breast exams, and less than 1 percent of pap exams, while adoption referrals and prenatal care were practically non-existent.

Would any of this changed had Wen remained president? Her pro-abortion advocacy is not in doubt, but her goals to transform Planned Parenthood away from an abortion chain above all else and into a legitimate health care provider may have led to her firing.