In a recent Twitter thread, pro-abortion feminist author Jessica Valenti expressed her anger at recent pro-life laws passed in Georgia and Alabama. Valenti posted a series of cases in which women were arrested due to harm caused to a preborn (or in some cases, born) child. She did this in an attempt to prove that women will be hurt if abortion is restricted or banned and implies that women will be thrown in jail for having miscarriages, though the majority of cases listed below have nothing to do with miscarriage.

But Valenti’s concern about women being investigated for miscarriages rings more than a little hollow in light of the fact that abortion groups are already advising women illegally taking the abortion pill to lie to medical personnel if they experience complications, and to claim they are having natural miscarriages. The abortion drugs, these groups say, cannot be detected in blood or urine.

In a closer look at some of the cases presented by Valenti below, laws meant to protect preborn human beings from violent aggressors were misapplied instead to the mothers of the children. But none of the cases prove that women will be jailed for miscarriages — especially considering that Georgia’s and Alabama’s new abortion laws specifically exclude any penalties for women.

Valenti’s claim: Bei Bei Shuai lost her pregnancy after she tried to kill herself – within a half hour a homicide detective was questioning her. She was arrested for murder  https://t.co/2zhFVcbjAB

FACTS: This case is about the death of a viable baby in the third trimester; it is not questioning a miscarriage.

Shuai was suicidal, distraught, and knowingly and intentionally ingested rat poison to end her own life and her baby’s — a fact admitted in the case, and not mentioned by Valenti.

According to the appeal in the case of Bei Bei Shuai vs. State of Indiana, Shuai:

Indiana’s criminal code states that a person who “knowingly or intentionally kills a fetus that has attained viability… commits murder, a felony.” It is believed that this is the statute under which Shuai was charged. 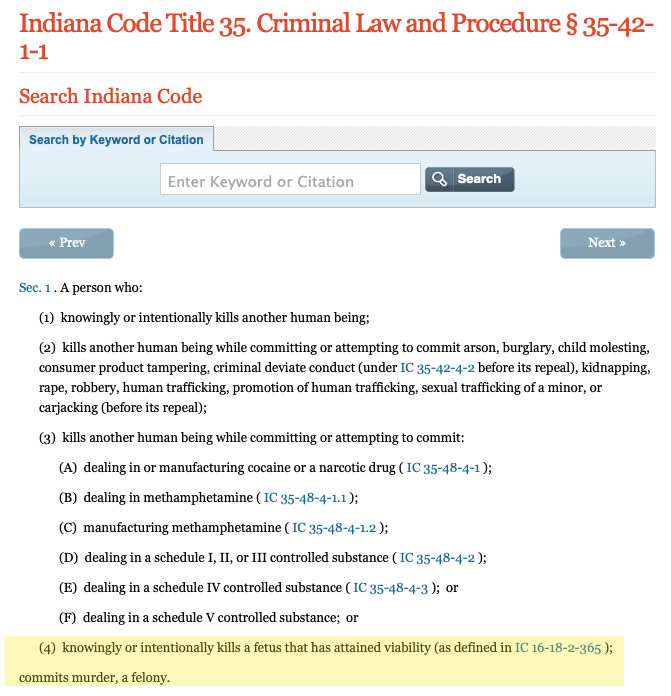 According to the appeal, a friend noticed Shuai was acting strangely, and she admitted to taking the rat poison. She was taken to the hospital on December 24 where doctors gave her a steroid shot to help the baby’s lungs in case of premature birth.  On December 31, an OB-Gyn noticed an abnormal fetal heart rate and recommended a C-section, to which Shuai consented. But Shuai’s baby girl’s blood wouldn’t clot, and she was put on life support. The baby was later removed from life support and died of “intracerebral hemorrhage due to maternal Coumadin ingestion.”

Marion County prosecutor Terry Curry told The Indiana Lawyer, “Contrary to public debate, [the case against Shuai] has nothing to do with pro-life, abortion,” or claims that state prosecutors were attempting to “criminaliz[e] pregnancy.”

So, what does this case have to do with a woman being jailed as a result of a miscarriage or stillbirth? Nothing.

Valenti’s claim: Melissa Ann Rowland of Utah was charged with murder after one of her twins was stillborn – because she refused a c-section. https://t.co/HZOQJxXNEf

FACTS: A C-section has nothing to do with miscarriage.

Ms. Rowland refused a Caesarean, and as a result, one of her twins died. She was reportedly informed “numerous times” — according to court documents — that her unborn twins would die if she did not get immediate medical treatment. According to the British Medical Journal, the indictment followed a decision by the Utah Supreme Court that held that unborn children at all stages of development are covered under the state’s criminal homicide statute. An exception is made for abortions. Some other facts, according to BMJ, are that Rowland…

Rowland’s case was the first in Utah to be based on the refusal of a C-section as opposed to misuse of drugs/alcohol, although there have been similar cases in other states.

Valenti’s Claim: Purvi Patel of Indiana was sentenced to 20 years in prison for feticide. She said she had a miscarriage, and no traces of any abortifacent were found in her blood work.  https://t.co/qIOnVFsEr4

FACTS: Patel’s arrest was based on the accusation that the baby was not stillborn, but born alive.

Valenti fails to mention in her tweet that pro-abortion groups claim the abortion pill medications cannot be detected in either blood or urine. Valenti mentioned “Purvi Patel & all the other women who have been arrested for miscarriages and stillbirths.” But Patel was actually arrested for secretly delivering her child and leaving him in a dumpster, and an autopsy later showed he had taken a breath. Her conviction, however, was ultimately overturned by an appeals court, which claimed that “the legislature did not intend for the feticide statute to apply to illegal abortions or to be used to prosecute women for their own abortions.”

According to the affidavit at the time of Patel’s arrest, she…

The baby was discovered after a doctor treating Patel called police and drove to the dumpster. An autopsy found that the baby was, indeed, 30 weeks, had taken a breath, and had also lost a great deal of blood due to the cord never having been clamped. At trial, another pathologist testified the fetus was stillborn because the lungs were not developed enough to draw breath.

According to USA Today, “At Patel’s trial, prosecutors presented evidence that Patel ordered the abortion drugs misoprostol and mifepristone from a pharmacy in China, including text messages between her and a friend, and emails Patel exchanged with the company. Patel’s attorney, Jeffrey Sanford, argued the messages and emails did not prove Patel took the pills.”

Because Patel didn’t seek help for the child, resulting in the baby’s death, the state charged her with class B felony feticide, and a jury found her guilty. She was sentenced to 30 years in 2015, but the Indiana Court of Appeals overturned her conviction.

Valenti’s claim: Angela Carder was 27 years old, 26 weeks pregnant, and had cancer. She was forced to undergo a c-section to try to save the baby despite the risk to her health. They both died.  https://t.co/ULulVhxfpe

FACTS: This case was centered between the preborn baby’s chance of survival at 25 weeks and a mother with terminal cancer where death was imminent.

Valenti’s statement seems to imply that Carder died due to a C-section, but according to the British Medical Journal, Angela Carder was…

The baby survived just two hours outside the womb, and Carder died two days later. According to the BMJ, the D.C. Court of Appeals reversed the decision to “avoid setting a precedent” for future cases. The New York Times reported that Carder was heavily medicated, and her family believed she would not have wanted the C-section that “would probably shorten her life.” The hospital, however, feared a lawsuit if it had made no effort to save Carder’s baby. The NYT reported that Carder regained consciousness and cried when she learned of her daughter’s death. Two days later, she died as well.

A tragic case, but again… not a case of miscarriage or stillbirth, but a highly unusual case dealing with a pregnant terminal patient. The courts ensured that the situation should not happen again.

Valenti’s claim: Rennie Gibbs of Mississippi was 16 years old when she delivered a stillborn baby – she was indicted on charges of “depraved heart murder” after accusations that she used drugs  https://t.co/lNThJG9Weq

FACTS: This case centered around whether a pregnant mother’s cocaine consumption directly impacted a baby stillborn at 36 weeks, well past viability.

Gibbs was sentenced to life in prison for “depraved heart murder,” a charge meant for cases that show a “callous disregard for human life.” However, it was determined that this sort of conviction was not the original intent of the state when it passed the homicide statute.

According to a 2014 ProPublica article, “experts who later examined the medical record [felt] the stillborn infant’s most likely cause of death was also the most obvious: the umbilical cord wrapped around her neck.” Mississippi’s medical examiner at the time, however, detected traces of “a cocaine byproduct” in the baby’s blood and determined the cause of death to be cocaine toxicity.

The Dispatch noted that at the time the charge of murder was assigned, “there was nothing in the law that precluded the grand jury from charging Gibbs with murder. The Supreme Court has since decided that murder did not apply based on their interpretation of the statute.” Lowndes County Circuit Court Judge Jim Kitchens said in his ruling that “the law was unclear in Mississippi as to the appropriate charge, if any, to be levied when a pregnant woman allegedly consumed illegal drugs and allegedly caused the death of her unborn child.” 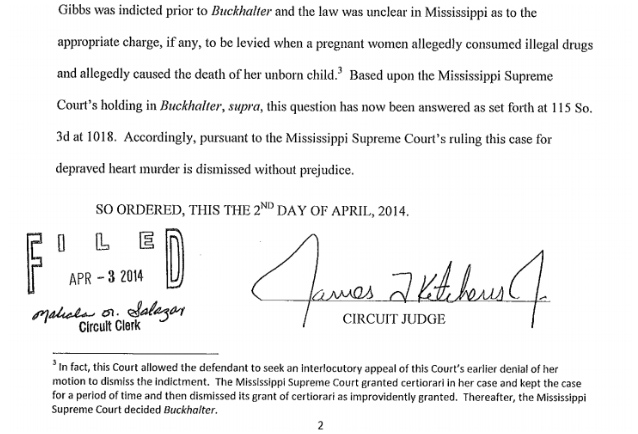 Valenti’s claim: A woman in Louisiana was jailed on charges of second-degree murder after she went to the hospital for unexplained vaginal bleeding. It was over a year before medical records showed that she had a miscarriage.  https://t.co/2wjEmNThuO

FACTS: This was a vague case, similar to a case where a mother reportedly confessed to the baby having been born alive.

This claim is based on a mention in a New York Times op-ed written by Lynn Paltrow and Jeanne Flavin, which offers no links to the facts of the case. (Incidentally, author Paltrow was a senior staff attorney for the ACLU’s Reproductive Freedom Project and was VP of Public Affairs for Planned Parenthood of New York City.) Based on another report by these authors, it is possible that the woman was Michelle Marie Greenup, who…

Valenti’s claim: Christine Taylor of Iowa was charged with attempted feticide after she fell down the stairs at home. https://t.co/4SM4k0QBN0

FACTS: This case was based on a misunderstanding by hospital staff, who believed Taylor had purposely tried to end the life of her baby.

Christine Taylor, a 22-year-old Iowa mother of two, was charged with attempted feticide in 2010 after she fell down the stairs at her home after arguing with her estranged husband. Taylor reportedly…

Taylor was apparently still in her second trimester of pregnancy — though she allegedly told medical personnel otherwise — and feticide charges would only apply in the third trimester.

According to the California Law Review, Taylor “voluntarily sought further care at a hospital” but somehow in the course of conversation, let slip that she “felt ambivalence about her pregnancy during its early stages,” sharing “intimate details about her estranged husband’s threat that he was leaving her.” She said she was “upset and frantic,” and tripped and fell.

Hospital staff reported this to the police “because they interpreted Taylor’s case to fit within Iowa’s criminal feticide statute, which prohibits intentionally terminat[ing] a human pregnancy after the end of the second trimester of the pregnancy . . . .'”

According to Radio Iowa, “both police and Taylor have said no harm was done to the baby. If the trial had moved forward, it would have been the first case of feticide prosecuted in the state of Iowa.”

This case was also not about miscarriage or stillbirth.

These cases are tragic but it is disingenuous to use them to justify abortion. It is intellectually dishonest and unfair to claim anyone wants to penalize women who face natural miscarriage.