Data from the State of Maryland reveals that since 2006, taxpayer-funded Medicaid abortions in the state, committed mostly for the vague reason of the woman’s “mental health,” have increased year after year, costing taxpayers almost $48 million.

While the federal Hyde Amendment prohibits federal dollars from paying for most abortions, Medicaid dollars passed to states by the federal government can be used to pay for abortions at the state level.

Live Action News has previously shown how 17 states allow taxpayer dollars to fund abortions in excess of the Hyde Amendment’s restrictions. In addition, since money is fungible, even with Hyde in place, dollars sent to groups like Planned Parenthood can fund abortion centers and abortion staff.

According to a document published by Maryland’s Department of Health and Mental Hygiene, the State will pay for abortions as long as the provider fills out a form that certifies:

If you review all these reasons — physical health, mental health, life of the woman, and health of the baby — you essentially have abortion on demand, as defined in Roe v. Wade and the companion case, Doe v. Bolton. However, according to the state of Maryland, women eligible for Medicaid solely due to a pregnancy do not currently qualify for a state-funded abortion.

I contacted the state of Maryland to see if they had published statistics on Medicaid funding. What I found, according to several Department of Health and Mental Hygiene documents the state provided, is the following (all the documents are available online here):

In the past three years, taxpayers have been forced to spend $16.6 million for 23,395 Medicaid abortions in Maryland.

The largest portion of those procedures — 68 percent (15,979) — were performed at abortion facilities, costing taxpayers approximately $400.00 per procedure.

There are no requirements to report abortions in the state, however, Guttmacher (Planned Parenthood’s former “special affiliate“) estimates that in 2014, approximately 28,140 abortions were committed.  This means that 27 percent of abortions were paid for by taxpayers that year. 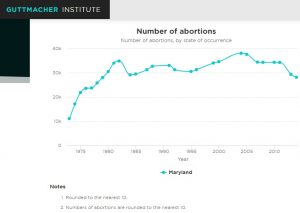 Maryland abortion trends according to Guttmacher 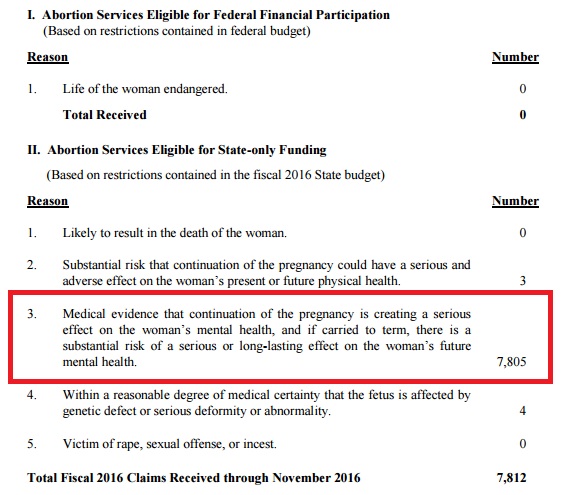 Out of 7,812 abortions paid for with Medicaid dollars in 2016, none were performed to save the life of the woman, according to statistical data provided by the state.

In fact, almost 100 percent of taxpayer-funded abortions (7,805) were performed because the doctor believed it would affect the woman’s “mental health,” described this way:

Of the remaining seven, three abortions were recorded because the doctor certified that there was “a substantial risk that continuation of the pregnancy could have a serious and adverse effect on the woman’s present or future physical health.”

Four abortions were due to the fact that “the fetus [was] affected by genetic defect or serious deformity or abnormality.”

Out of Medicaid claims received by the state for years 2008 through 2015, “mental health” of the woman appeared to be the default reason abortion doctors gave to justify the taxpayer-funded abortion.

The numbers break down as follows:

As previously reported, “mental health” of the mother is something that can be determined by the abortion doctor who profits from the procedure — and abortionists who work for Planned Parenthood have stated that they believe every abortion is “medically necessary.”

When the abortion industry says tax dollars will not pay for abortion, this simply is not true. The State of Maryland is just one of many examples of taxpayer funding of abortion. Another example is that of New Mexico, where undercover calls revealed several instances (listed below) in which a late-term abortion facility recommended taxpayer-funded abortions:

Live Action News also published an overview on how your tax dollars fund abortions, nationally. That article noted that according to the most recently available report from the state of California’s Medi-Cal program, public funds paid for more than 83,000 abortions there.

In addition, despite abortions falling to their lowest number in 35 years of reporting in Minnesota, taxpayer funded abortions in the state increased almost 11 percent in 2015, with Planned Parenthood performing the largest portion of those procedures. In Alaska, abortions declined 5.5 percent, while taxpayer-funded abortions rose over 34 percent from 32.8 percent in 2015 to 44.1 percent in 2016. Statistics from New York show that taxpayers may be spending their hard earned dollars funding abortions on women who previously obtained one or more abortions.

From 2008 to 2016, the State of Maryland gave Planned Parenthood over $24 million dollars in taxpayer funds for various reasons, according to data published on Maryland’s Open Data Portal website. Earlier this year, the Maryland Senate approved a bill that would direct funds to Planned Parenthood in the event that Congress defunds the abortion corporation.

“The bill shields Planned Parenthood with $2 million from the State’s Medicaid budget,” reports CBS Baltimore, “and another $700,000 from the general fund should Republicans in Congress succeed in cutting off federal funds,” the news outlet writes.

The alarming numbers show clearly that taxpayers are, in fact, funding abortions. As Congress debates defunding Planned Parenthood, pro-lifers must push for an end to funding the abortion industry with American tax dollars at the state and federal levels.