The Centers for Medicare and Medicaid Services has published shocking information dispelling Planned Parenthood’s deceptive talking points that federal taxpayers are not funding abortions. This information is critical, because if the American taxpayers understood what their money really goes to, they would oppose federal funding of the nation’s largest abortion provider, whose abortion market share is almost 35 percent nationally.

Planned Parenthood and its supporters often claim that the federal tax dollars they receive are mere “reimbursements,” and that tax dollars do not pay for abortions. They base their claims in part on the federal Hyde Amendment, which, as Live Action News has previously pointed out, prevents federal dollars from funding most abortions through Medicaid but holds an exception to allow funding in cases involving rape, incest, and life of the mother.

Recently, Sarah Stoesz, president and CEO of Planned Parenthood Minnesota, North Dakota, South Dakota, stated, “No federal dollars go to pay for abortion in this country. They never have. It is illegal.” And Dawn Laguens, the executive vice president of Planned Parenthood Federation of America, told The New York Times, “Let’s be clear: Federal funds already do not pay for abortions[.]”

Even Cecile Richards, Planned Parenthood’s CEO, stated the following to MSNBC without being challenged (go to 1:33 on video interview): “Federal funding doesn’t go for abortion – at all. It hasn’t for many many years.”

She also tweeted this “fact” (which isn’t a fact at all): 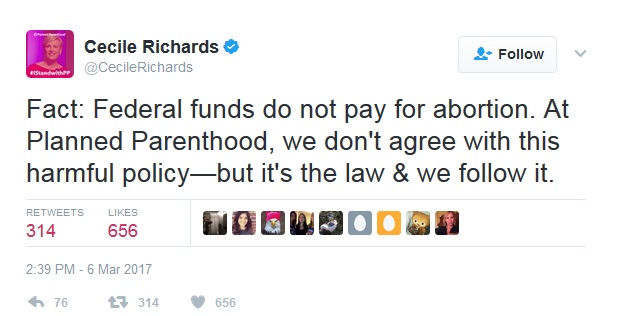 Despite Richards’ claim that federal dollars do not fund abortions, she was much more forthright when asked about this (under oath) before a congressional hearing in 2015, saying:

No federal funds pay for abortion services, except in the very limited circumstances permitted by law — when the woman has been raped, has been the victim of incest, or when her life is endangered.

According to Medicaid.gov, the Medicaid program is jointly funded by the federal government and the states. The federal government pays states for a specified percentage of program expenditures. Although this may change under the current administration and newly elected Congress, currently, states are disallowed from disqualifying providers who perform abortions.

A March 2017 report published by Guttmacher (a pro-abortion organization with a long history of affiliation with Planned Parenthood) breaks down the way those funds finance abortion. Even though some states use their own money to fund abortion, “at a minimum, states must cover those abortions that meet the federal exceptions.”

But just how many abortions are taxpayers funding federally?

A 2015 Forbes blog on health care and entitlement reform contended that “taxpayers subsidize roughly 24% of all abortion costs in the U.S. with 6.6% borne by federal taxpayers and the remaining 17.4% picked up by state taxpayers.”

A study conducted by Guttmacher revealed that in 2010, federal tax dollars paid for 331 abortions, while state funding contributed to 181,000 abortion procedures. However, in states that allow state funds to pay for abortion, several audits revealed that the federal taxpayer has been illegally footing the bill.

The money in question originated from a federal family planning program administered by the Nebraska Department of Health and Human Services. Federal law specifically prohibits the program’s funds from being used for abortions.

Casey Mattox, director of the Center for Academic Freedom at the Alliance Defending Freedom, described another case in a 2015 article from The Federalist:

In 2013, the U.S. Department of Health and Human Services’ Office of the Inspector General conducted a Medicaid Integrity report, and found several states were improperly claiming federal monies for family planning services. California overcharged the federal government for the services, some which HHS found weren’t even related to family planning.

A similar audit in 2008, which focused solely on New York, found hundreds of thousands of abortion-related claims were improperly billed to Medicaid by labeling them “family planning.”

Planned Parenthood submits practically all of its billing to the state and the federal government as “family planning,” thereby obscuring the lines of what is an abortion versus a birth control visit, even further.

By looking at actual expenditures published by the Centers for Medicare and Medicaid Services (CMS), Live Action News discovered that, despite Planned Parenthood’s hype, federal dollars are indeed funding abortions.

In 2015, taxpayers funded $500,659 for abortions under Medicaid assistance programs, according to the most recent summary of national net expenditures published by Medicaid.gov. Of that total, $327,341 was paid by federal dollars, and $173,318 was paid by the states where the abortions were committed.

Live Action News confirmed this with a spokesperson from CMS, who sent this reply by email:

And, tragically, American taxpayers paid even more for abortion in 2014.

The net national total of Medicaid program assistance expenditures that year reveals that taxpayers spent $1,204,949 on abortions, with $604,897 picked up federally and $600,052 picked up by taxpayers within the states.

Taxpayers contributed over a million dollars for abortions in 2014.

According to a spokesperson for CMS, 2016 data should be published soon.

Planned Parenthood Pushes for More Taxpayer Funding of Abortions, Despite Its Deceptive Activity and Fraudulent Behavior

It is no surprise that Planned Parenthood, which already receives over half a billion in federal tax dollars annually, wants the Hyde Amendment repealed completely – a move that would increase the organization’s federal tax dollars exponentially. Recently, Richards doubled down on Planned Parenthood’s belief that federal dollars should fund any and all abortions, telling an audience at Google (go to 13:10), “[F]ederal funds do not pay for abortion – they have not for decades [HYDE]. Now, we think that’s wrong… but that is the law of the land and Planned Parenthood obeys the law to the letter.”

The fact remains that Planned Parenthood is being deceptive, and Live Action News has repeatedly documented that the company is far from the “trusted” provider of health services it claims to be. Claiming that it “obeys the law to the letter” is laughable, as a 2015 report revealed that “45 public audits of Planned Parenthood affiliates, along with 57 audits of state family planning programs, found waste, fraud, and abuse to the tune of $129.7 million.”

Beyond this, Planned Parenthood has failed to report child sexual abuse, a violation that alone should result in the organization losing millions of taxpayer dollars granted to it under the federal Title X Family Planning Program.

And while Planned Parenthood deceives the American public and lies to the complicit media (a point Live Action News has documented recently), the organization is rarely, if ever, called out for its deliberate deceptions. As a result, American taxpayers have been fooled into believing that their tax dollars are going for “health services” and are not paying for abortions.