A California state senator thinks the state’s college students need more access to “free” abortion, and she has proposed a bill to give them that – using public money.

S.B. 320 would require California’s public colleges and universities that have student health centers to offer the abortion pill to students. The bill, introduced by Sen. Connie Leyva (D-Chino), is co-sponsored by the Women’s Foundation of California, ACCESS Women’s Health Justice, and ACT for Women and Girls and would force these student health clinics to offer medical abortion. It does not mandate surgical abortion.

The bill’s text reads in part:

It is important that college students have access to safe and reliable reproductive health care on campus, including early pregnancy termination.  If a UC, CSU or community college already has a student health center, it makes sense that they provide this health care service within that facility so that students do not have to travel many miles away from their work and school commitments in order to receive care. SB 320 will help to improve the academic success of students and, if a pregnant student wishes, she will be able to receive this health care service with limited financial or logistical barriers.  College aged women should not have to wait additional time or travel long distances when they may have already decided to end their pregnancy.  If she so chooses, the safest time for a woman to end her pregnancy is within the first ten weeks, so I look forward to working with colleagues and stakeholders to safely expand access to reproductive healthcare at community college and public university campuses in California.

Leyva neglects to note that widespread taxpayer-funded abortion is already pervasive in the state. Local Planned Parenthood facilities are happy to tell patients how to get “free” abortions, as evidenced by this Planned Parenthood Mar Monte listing: 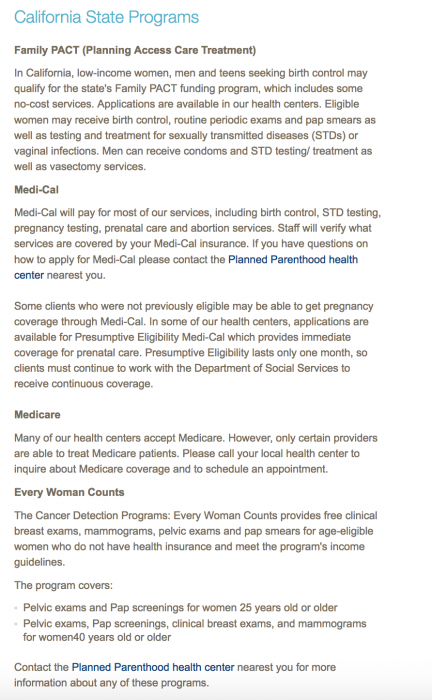 Indeed, California’s own health department releases annual reports of the abortions funded by Medi-Cal. This most recently available report shows that public funds paid for more than 83,000 abortions.

California is so abortion-friendly that it doesn’t seem to care how old a woman is when paying for an abortion. Three point three percent of its funded abortions went to girls under 18, for a total of 1,808 abortions performed on minors, funded by the state.

Yet, Leyva seems to think forcing public colleges and universities to provide even more state-funded abortions is a matter of equal rights, as she told a Fresno news station, adding that a college student should be able to undo a decision she regrets. She said:

This is really about equality for all, right, if you are in college and you are a young man and you do something maybe you wish you hadn’t involved yourself in, you walk away and nothing happens. If you are a young woman, maybe you make a decision you regret and it ends in a pregnancy; you should make sure you have the option to do what’s right for you and your future.

Levya seems to believe that taking human life is an acceptable way to ensure “equality” and “undo” regrettable decisions. But nothing really “undoes” pregnancy. Abortion simply ends pregnancy in a violent and unnecessary way.

And this bill is yet another way to ensure the Golden State turns red – not politically, but with even more innocent blood shed at taxpayer expense.