Angela Brown, a former female employee of Planned Parenthood, has filed a federal lawsuit alleging that the abortion corporation “intentionally and willfully discriminated” against her by making it difficult for her to take medical leave when she was diagnosed with cervical cancer.

This alleged discrimination is in violation of the Americans with Disabilities Act (ADA) and the Family Medical Leave Act (FMLA). Brown first filed a claim with the Equal Employment Opportunity Commission (EEOC) on March 28,2017, stating that she was fired from Planned Parenthood of Indiana and Kentucky earlier this year after working for them since September of 2013.

The EEOC reviewed her claim, and on August 29, 2017, sent Brown a Notice of Suit Rights. Brown then filed a discrimination complaint on November 27, 2017, in federal court, seeking lost wages, punitive damages and reinstatement to her position. 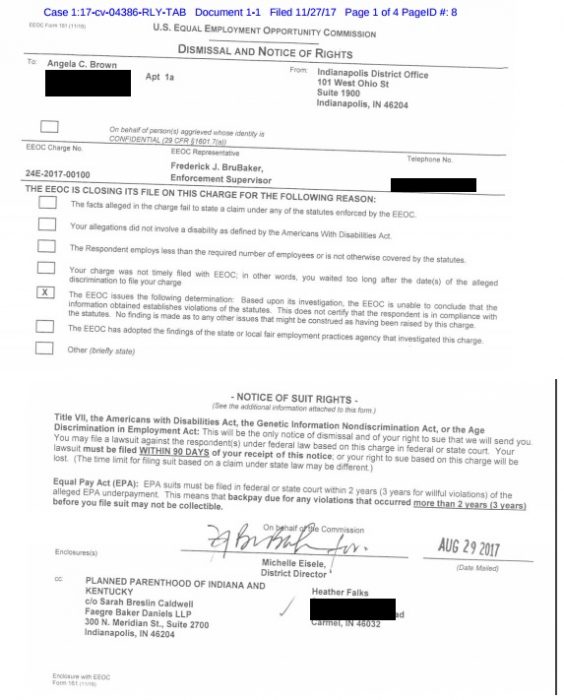 According to the document, obtained by Live Action News, in June 2016, Brown gave Planned Parenthood (Defendant) notice of her cervical cancer diagnosis. Due to the illness, she had to undergo several medical treatments, including trips to her doctor and a biopsy which Brown claims she had to receive every three months.

According to Brown’s claim, she told her employer that she was going to have cancer-related surgery. She says that on the day prior to her scheduled surgery, she received a text from Planned Parenthood denying her the day off without “a valid reason”:

The day before her surgery, Ms. Brown called off of work due to pain and bleeding associated with her disability. The Defendant texted Ms. Brown stating “you will not take off without a valid reason.” Ms. Brown had never called into work prior to this date. When Ms. Brown returned to work after surgery she had restrictions. It was difficult for Ms. Brown to sit due to her disability. If and when Ms. Brown did sit she needed a comfortable chair.

Brown said she was terminated two weeks later on March 20, 2017, the same day that she attended a staff meeting. Brown states that when she arrived at the staff meeting there were no chairs for her to sit on, so rather than “violate her restrictions in order to carry a chair into the room,” Brown said she opted to just stand.

The lawsuit alleges that “Brown was told that her standing during the staff meeting was ‘intimidating’ and
‘disrespectful’ towards the Vice President.” 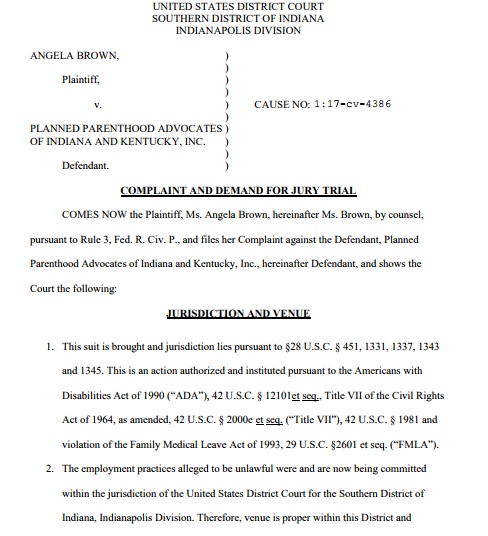 Brown alleges that Planned Parenthood violated the Americans with Disabilities Act (ADA) and discriminated against her by failing to accommodate her condition.

Brown’s attorney, Heather Falks, told the Indy Star that Brown’s termination was “retaliation for an employee who was seeking leave.”

Falks also went after Planned Parenthood, which masquerades as a health care agency, telling the Indy Star that, “There’s an assumption that when you treat women with those issues, you’d be sympathetic to those issues.”

This is not the first time a Planned Parenthood staffer has alleged discrimination against the abortion corporation.

Other former staffers have filed claims against Planned Parenthood, accusing the tax funded organization of overbilling abuses and Medicaid fraud.

Planned Parenthood receives half a billion dollars a year from taxpayers, and several million dollars come from the federal Title X Family Planning Program. Regulations under Title X specify, “Projects may not discriminate on the basis of disability…facilities must be readily accessible to people with disabilities.”Additionally, despite Planned Parenthood being cited for violating patient privacy and failing to report child sexual abuse, they continue to receive millions annually in taxpayer funds.