In a video published on YouTube and Facebook, an alleged Planned Parenthood patient claims that Planned Parenthood discriminated against her based on her disability. Andrea Lausell, who has spina bifida, posted the video and shared her support of the abortion corporation:

Yet despite her support of the organization, after visiting them Lausell described herself as feeling “very helpless.”

She then shared her story of what happened to her when she turned to Planned Parenthood for help.

“When I got there, the lady at the front desk was, at first, really nice. I filled out the papers. I gave them my insurance. But since my insurance is very different, it has to do with my Spina Bifida, and the Veterans program, the lady at the front desk asked me about it,” explained Lausell. “And I told her, well, I have Spina Bifida, that’s my disability. So, my insurance goes through that. I just wanted to see if it will cover today’s visit. If it doesn’t I have the funds to pay for it.”

She then described the reaction of the Planned Parenthood staffer to her disability:

Her demeanor changed right away. She wasn’t sure – she’s like ‘we might not be able to accept it – but we might not even be able to see you’ and I was like ‘Why?’ And she said it was because of my Spina Bifida, then she told me to sit down – she’ll run the insurance

Lausell says that things got “weird” from there.

“She said because I have a disability I need to see a primary doctor first in order to see Planned Parenthood because they didn’t want to give me birth control because of my disability,” said Lausell. “[…] But she told me that even if I had something as simple as diabetes, she would have to turn me away.” 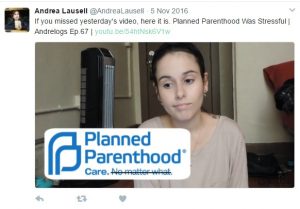 At that point, Lausell said that she requested to see a medical staff member, but the receptionist advised her that while she could wait the two hours, “honestly, they’re probably going to turn you away because we’re very basic here and we can’t help you.”

Lausell said that she waited a total of four hours before seeing a nurse who took her information before getting the prescription she requested. She clarified in the video that the nurses that spoke with her about her sexual behaviors never made her feel like her disability was a concern.

But one Planned Parenthood staffer did:

It was the front lady. It was the front desk. And, she was really pressuring me not to be at Planned Parenthood. She’s like, ‘I think it’s better if you leave because we don’t know what to do with your disability.’  And that was very upsetting […] I felt very helpless […]

It’s mind-boggling. It feels discriminative because she’s essentially saying if you have a disability Planned Parenthood’s not the place to be. […] The fact that she was willing to turn me away because of my disability, because she didn’t understand it, was really wrong.

And Lausell is correct.

Under federal law, the Americans with Disabilities Act of 1990 (ADA) “prohibits discrimination and ensures equal opportunity for persons with disabilities in employment, State and local government services, public accommodations, commercial facilities, and transportation.”

The Civil Rights Division of the Department of Justice (DOJ) regularly investigates ADA violations in which patients have been turned away from doctors due to a disability or health condition. More disturbing in this case is the fact that Planned Parenthood is a recipient of federal dollars through the Title X Family Planning program, which prohibits discrimination based on disability, according to the Program Requirements for Title X Funded Family Planning Projects 2014 guide. Since Planned Parenthood receives Title X funding they must not discriminate against a patient because of a disability and must be accessible to people with disabilities. They also must comply with the Americans with Disabilities Act.

Lausell concluded her thoughts about her visit to Planned Parenthood by pointing out that:

Planned Parenthood is the nation’s top abortion provider, garnering over 34 percent of the abortion market share nationwide. As an abortion corporation, Planned Parenthood aggressively fights legislation that would prohibit abortions based upon the disability of the preborn child.  Despite decreasing health care services at Planned Parenthood, they continue to receive half a billion dollars in federal money every year.

It will be interesting to see if Lausell’s video account rises to the place of warranting an investigation into Planned Parenthood by the DOJ.