In November 2018, the New York Times (NYT) interviewed recently appointed Planned Parenthood president Dr. Leana Wen, who replaced political organizer Cecile Richards — the woman who presided over declining patient services and an aborted baby parts scandal. In her interview, Wen dodged topics such as eugenics — a largely racist philosophy — and self-managed abortions, all while claiming she has never done anything in her medical career but save lives. If this is the case, and Dr. Wen values human lives and desires to save lives, she’s working for the wrong organization.

The NYT asked Wen, “How do you consider the misinformation — such as, say, that Planned Parenthood furthers eugenics — that can proliferate about the organization?” The paper’s use of the term “misinformation” is intellectually dishonest and a denial of history, which granted Wen the ability to pretend the organization’s known eugenics roots were just part of some vast, pro-life conspiracy.

Wen’s only mention of eugenics was to claim, “The same individuals who are making these eugenics claims are often the ones who want to deprive our communities of evidence-based education like teen-pregnancy prevention programs….”

Now that Dr. Wen is president, does the NYT intend for the public to believe it is “misinformation” that Planned Parenthood’s founder, Margaret Sanger, had strong eugenics connections, Klan interactions, rants about immigrants, and promoted the idea of forced sterilization? Are we to diminish the horrific effects all those victimized by eugenics as we scrub Planned Parenthood’s well-documented history of it from the public sphere? 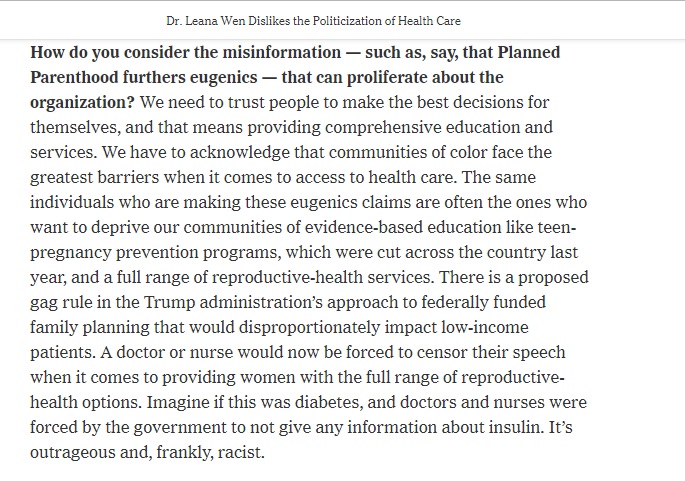 Apparently, this liberal press outlet would prefer to rewrite history.

The philosophy of eugenics negatively affected many Black Americans, such as Elaine Riddick, who was forcibly sterilized in North Carolina in 1968. Her tearful testimony encouraged lawmakers to vote for reparations for those like her, who were eugenically sterilized. One of the prominent supporters of that horrific eugenics program was Clarence Gamble, a director of Margaret Sanger’s American Birth Control League, which later changed its name to Planned Parenthood.

But today’s abortion-friendly media appears to have become far more activist than investigative, and the New York Times refused to dig any deeper into Wen’s claims.

Year after year, Planned Parenthood has presented its most prestigious Margaret Sanger Award, named after its eugenicist founder, to journalists, to politicians like Democrat Nancy Pelosi, and to members of the media. (Perhaps for its softball Wen interview, the NYT will receive one as well.) 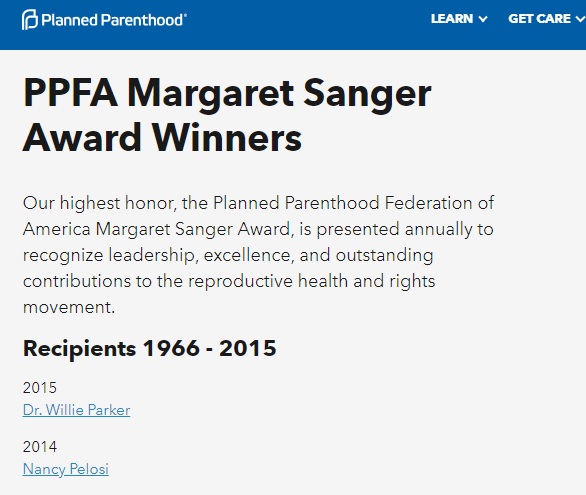 If Dr. Leana Wen truly wants to continue in her pattern of saving human lives, then why is she working for an organization established by people who promoted the idea of forced sterilizations for those arbitrarily deemed “less than”?

The NYT asked Wen, “…[H]ow do you feel about self-induced abortions?” Despite claiming she treated a woman who died from an illegal “home abortion,” Wen passed up the opportunity to denounce the push for self-managed abortions. 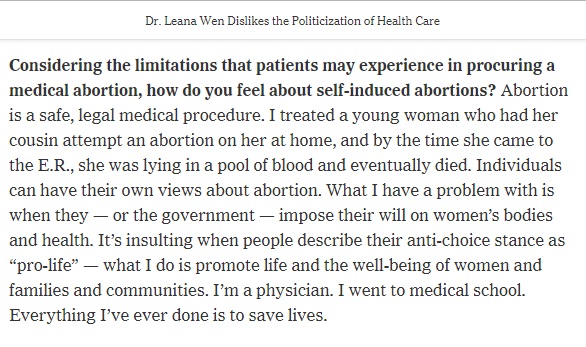 Wouldn’t more unsupervised, at-home abortions have the potential to lead to even more emergency room visits like the one she describes in her interview? But instead of defending lives like a medical doctor concerned about women’s safety, Wen answered like a pro-abortion activist: “What I have a problem with is when they — or the government — impose their will on women’s bodies and health.” 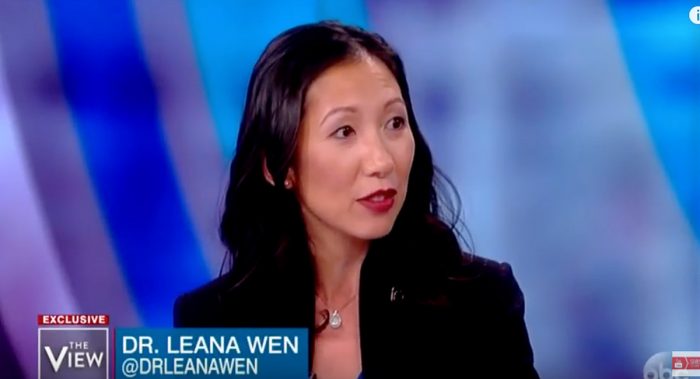 Wen pivoted further by redirecting the topic to an attack on pro-lifers — who, by the way,  regularly document transports of women from Planned Parenthood facilities to emergency rooms by ambulance, after so-called “safe” abortions.

“It’s insulting when people describe their anti-choice stance as “pro-life…” said the new leader of the organization killing 320,000 human beings every year.

While the NYT erroneously titled this sad excuse of an interview, “Dr. Leana Wen Dislikes the Politicization of Health Care,” it is beyond clear that Wen is in lockstep with Planned Parenthood, the inventor of abortion politicization, which has enabled the organization to rake in half a billion annually taxpayer dollars that may very well help to pay Wen’s salary.

After all, it was Planned Parenthood, not those pesky “anti-choice” pro-lifers, who recently unveiled a new plan to expand abortion on demand in 2019. How’s that for politicization?

As delusional as it sounds, Dr. Wen and the media present abortion as “healthcare” and claim that Wen’s job as the abortion provider’s president is to “promote life and the well-being of women and families and communities” because, she claims, “I’m a physician. I went to medical school. Everything I’ve ever done is to save lives.”

Not all physicians save lives, Dr. Wen — including the ones working for Planned Parenthood and the abortion industry as a whole. They’re physicians who went to medical school, too — and some of them fully admit that they’re taking lives for a living.

Dr. Wen would have the public believe that abortion, the deliberate taking of human life in the womb at any stage of pregnancy, for any reason imaginable, committed 900 times per day by her organization, is “promot[ing] life.”