A series of well-timed tweets published by movers and shakers within the abortion industry reveal a new focus on what has been dubbed “self-managed” abortion. The social media push appears to be coordinated, and reveals that, as Live Action News has previously documented, the push for “home use” or “self-managed” abortions has been brewing for quite some time. And, just as the simultaneous tweets appeared, so have several reports and media articles on the topic. Historically, the push to change laws and expand abortion have never occurred in a vacuum.

The hashtag #selfmanagedabortion and several tweets promoting the concept of “self-managed” abortion suddenly appeared this past week, published by a number of organizations, including The Guttmacher Institute, a former “special affiliate” of Planned Parenthood. Guttmacher claimed in one tweet: “Evidence suggests that most individuals have the skills they need for safe #SelfManagedAbortion, including assessing eligibility, managing the drug regimen and assessing completion of the procedure.” 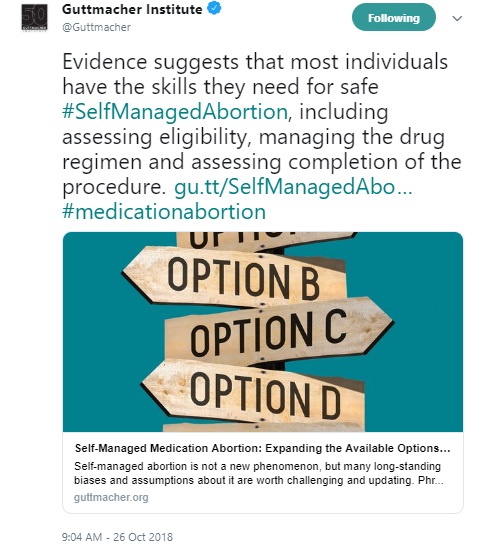 Until recently, self abortions were often portrayed by abortion advocates as dangerous. Even years after the introduction of medication abortions, the abortion pill regimen has claimed several victims. Recent FDA reports indicate that almost two dozen women who obtained pills at medical facilities have died from it, and a thousand have been hospitalized.

The regimen consists of two drugs: Mifeprex (mifepristone) and Misoprostol. In 1994, with the encouragement of President Bill Clinton’s administration, Roussel-Uclaf turned over U.S. rights of the drug to the Population Council, which began the clinical trials needed for FDA approval. The council then created Danco Laboratories to market the drug. 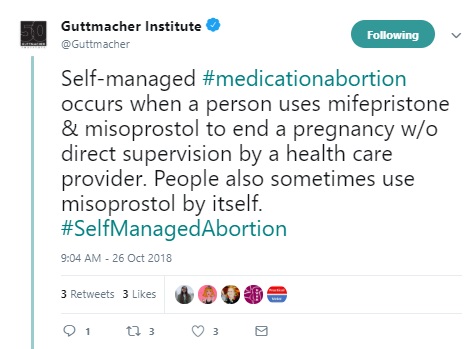 In 2000, the FDA approved the pill regimen with specific restrictions that Mifeprex not be shipped directly to women but instead be administered by medical personal at a clinic or hospital where follow-up care would be available.

Also quick to tweet the alleged safety of “self-managed abortion” was Dr. Daniel Grossman, an “expert” the media often quotes on the topic of reproductive health. Live Action News has previously noted that Grossman — who is the director of Advancing New Standards in Reproductive Health [ANSIRH]” — has direct ties to the abortion industry and a previous association with the manufacturer of the abortion pill. 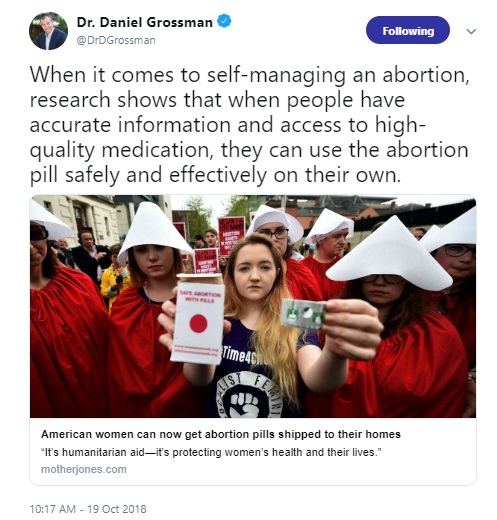 Grossman’s own testimony before a United States District Court in 2014 reveals that he provides clinical services, including abortion, as a consultant to Planned Parenthood Shasta Pacific, and serves as a liaison member of the Planned Parenthood Federation of America National Medical Committee. According to IBIS Reproductive Health, where Grossman is a senior advisor, prior to joining IBIS in 2005, Grossman was a health specialist at the Population Council in Mexico City. And, in 2010, at a National Abortion Federation Annual Meeting, Grossman received an award for IBIS’s research evaluating the use of telemedicine to “improve access to abortion in rural settings.” 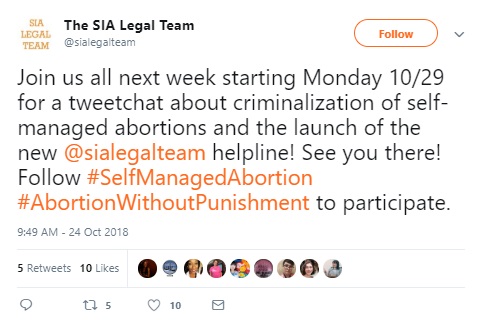 Groups like Reproaction, which has called for Twitter to remove pro-life advertisements, also tweeted the topic heavily. 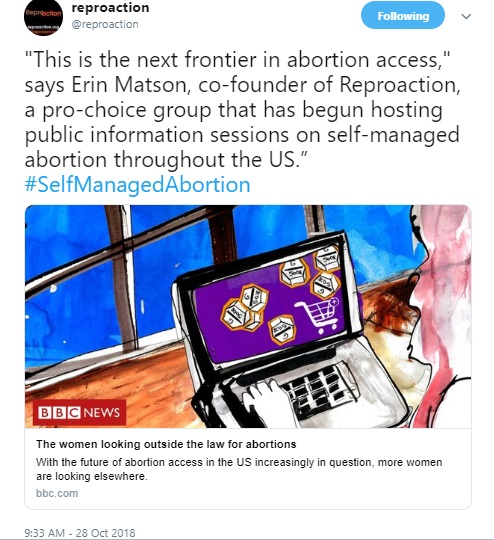 The organization’s co-founder, Erin Matson, a former editor-at-large for Rewire who served on the board of NARAL Pro-Choice Virginia, suggested (according to Teen Vogue) that “civil disobedience should be on the table when it comes to preserving abortion rights.”  Matson is regularly quoted by the media and has been a guest writer at The Huffington Post. She called self-managed abortion “the next frontier in abortion access.” 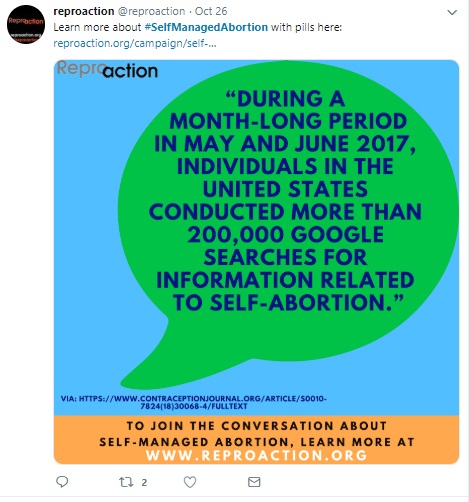 Earlier this month, Matson tweeted her intention to advocate for this even if Roe is overturned, writing,  “I am extraordinarily proud of @reproaction‘s Self-Managed Abortion campaign. No matter what happens to Roe v. Wade, we will share this information.” 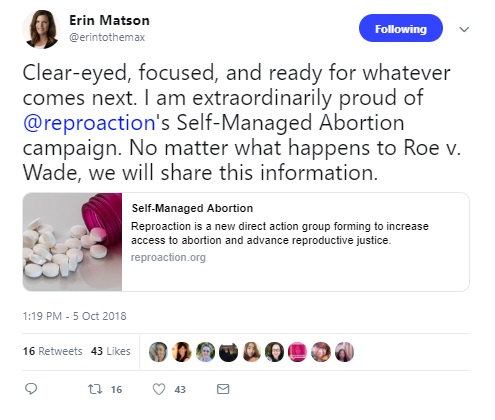 National Network of Abortion Funds (NNAF) tweeted, “[…W]e are so grateful for the advances in medicine and technology that are making #SelfManagedAbortion a reality for more people.” 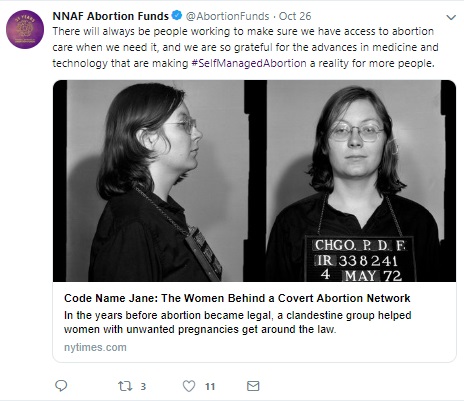 NNAF also promotes what amounts to dangerous do-it-yourself abortions on their website. Under the headline, “Where people can find the abortion pill,” NNAF tells women that Misoprostol “is used by veterinarians to treat dogs….”

The site adds, “In Mexico and other countries in Latin America, prescriptions are not required for most medicines available in pharmacies. Therefore it is possible for people to buy misoprostol over the counter…. In many cases, the pharmacist will not ask why a person wants to buy the medicine….” 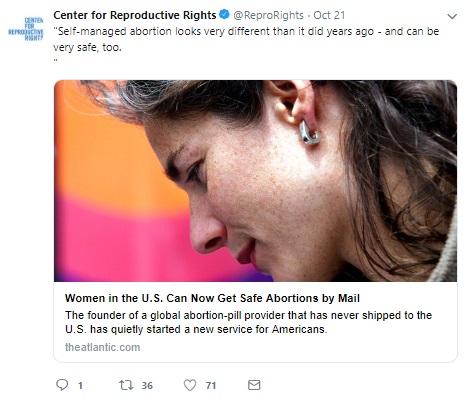 Center for Reproductive Rights on self managed abortion (Image: Twitter)

Rewire News also joined the Twitter fest, tweeting, “At a time when women and providers are being criminalized for abortions and reproductive rights are under attack by a president who promised to reverse #RoeVWade, this is an option that has already been lifesaving for many.” 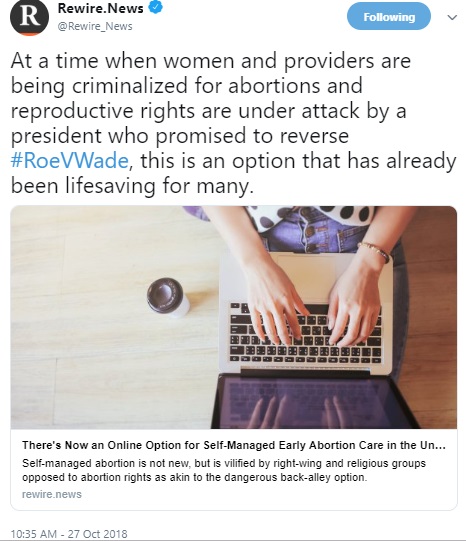 Rewire News on self managed abortion

The tweets follow an investigation by the FDA into Aid for Women after the group announced it would assist U.S. women to illegally obtain the pills. According to a report by CNN:

The US Food and Drug Administration, however, warns against buying mifepristone over the internet and says consumers who do so bypass distribution safeguards in place to protect them…

Tragically, Live Action News has documented many instances where women were harmed by abortions they obtained from medical professionals. As the industry — with help from the media — promotes the concept of “self-managed abortion,” it remains to be seen how many women will fall victim to the rhetoric that if they decide to take matters into their own hands, it will be “safe.”