The name Planned Parenthood implies that “parenthood” might be something the organization promotes, but for many years, Planned Parenthood’s business model has centered around the sale of one service: abortion. So, when Planned Parenthood claims to assist pregnant women, what services might it be promoting? The corporation’s own data is clear that its care for pregnant women — like prenatal care or adoption referrals — is actually shrinking while its abortion numbers skyrocket. But the corporation’s marketing of abortion is embedded throughout all of its messaging, and it goes to great lengths to present it as a favorable option to parenting a child.

On a page discussing pregnancy, Planned Parenthood’s headline asks, “When is the right time to have a baby?” The answer states in part, “Becoming a parent is a big deal, and there’s a lot to think about.”

READ: Planned Parenthood president: Abortion is ‘critically important’ to what we do

“Parents have to give up a lot for their children, and meeting your child’s needs can be frustrating and challenging. People who are raising kids usually get less sleep and don’t have as much time to do things they need and want to do. Having a baby is expensive, and many people find parenting hard financially,” the web page notes. On another page, Planned Parenthood writes, “Having children can also mess with your school or career plans and goals… many people find that having a child tests even the strongest relationship in ways they don’t expect. Raising a child on your own can be especially challenging….”

While Planned Parenthood does admit that “[p]arenting can be joyful, rewarding, and life-changing,” babies are portrayed as expensive, freedom-suppressing disruptors of career plans and relationships. On the other hand, Planned Parenthood states in a section titled, “Is abortion the right option for me?” that “[d]eciding to have an abortion doesn’t mean you don’t want or love children,” and in listing why some people decide to abort their babies, the corporation writes that those people simply “want to be the best parent possible to the kids they already have.”

Hey, Planned Parenthood, children in the womb exist, too, otherwise there would be no such thing as an abortion… 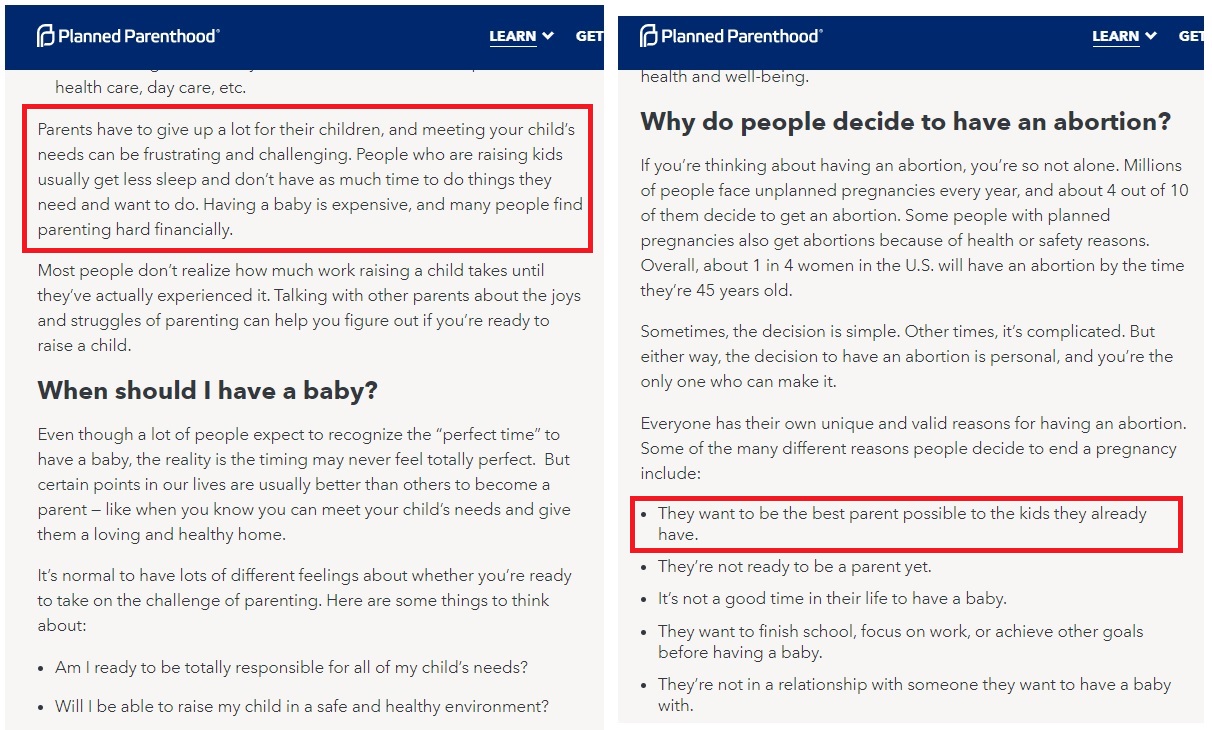 In all of this, Planned Parenthood fails to accurately detail how violent abortion is or what it does to a preborn child.

After the release of Live Action’s investigation, Planned Parenthood purged its websites of many of its claims related to offering prenatal care as a service.

Planned Parenthood’s business model is not built on helping pregnant mothers to give birth; it is built on abortion.

Planned Parenthood claimed, “One of the most-searched phrases on PlannedParenthood.org related to abortion is “abortion near me.” With the Abortion Care Finder, people can input their age, zip code, and the first day of their last period into the tool, and receive information about their abortion options, any state requirements that could mean they’ll need to make two trips to a health center and/or have parental notification or consent, and how to make an appointment at a health center.”

“The tool was created in response to the many people visiting Planned Parenthood’s websites looking for information on how to get an abortion, including which method of abortion — in-clinic or medication — is an option for them and what state restrictions may impact their access,” PP also wrote.

The digital tool is also described as a “locator” where clients “can access a safe, legal abortion,” despite the fact that women have died after legal (but not “safe”) abortions at Planned Parenthood facilities. In addition, there have been numerous emergencies documented in actual 911 calls to multiple Planned Parenthood abortion centers, many of which are repeat offenders.

Planned Parenthood claims that its abortion facility locator directs women to the “most accessible care — based on their location, age, and how far along they are in their pregnancy,” and Live Action News confirmed upon review that it directs users solely to Planned Parenthood facilities.

Abortion is a huge revenue source for the organization whose donor base is shrinking. Planned Parenthood’s 2019-2020 report stated that the abortion finder had already received more than 767,000 visits, with more than 73,000 clients scheduling abortion appointments.

That same report also documented Planned Parenthood’s highest number of abortions  ever: 354,871 — an increase of almost 3% from the 345,672 abortions previously reported, an almost 7% increase from its abortion totals just over a decade ago in 2009 (332,278). Planned Parenthood also now commits 41% of all abortions in the U.S. based on the most recent totals for national abortion numbers reported by the pro-abortion Guttmacher Institute in 2017.

A review of Planned Parenthood reports from the past decade (2010 to 2019-2020) reveals that Planned Parenthood committed 3,325,259 of the nearly 7.7 million U.S. abortions reported through 2017 (the Guttmacher Institute’s most recently reported year for abortion statistics).