As reported by Students for Life of America, Planned Parenthood has created an “Abortion Patient Navigator” staff position. Those filling this role are to ensure abortion-vulnerable women get to their abortion appointments regardless of any “obstacles” that may stand in the way. According to Planned Parenthood, the abortion navigation program exists to “guide the patient through the abortion care system.” In other words, abortion patient navigators work to ensure that women obtain abortions, and it does not appear at this time to employ “patient navigators” to help women navigate the other options available to them when experiencing unplanned pregnancies.

According to the website for Planned Parenthood League of Massachusetts, Planned Parenthood hires abortion patient navigators to ensure that nothing — including a lack of funding for the abortion and for lodging and transportation/travel costs to the abortion business — deters women from abortion. For a woman who may be feeling pressured to abort because of financial concerns, this offer in particular may steer her toward the final decision to abort, regardless of whether it is what she truly wants.

In its job listing, Planned Parenthood of Illinois notes that “the ultimate goal of the AB Navigation Program Manager is to relieve as much of the logistical and practical burdens from the patient as possible, such that the path to obtaining high-quality, patient-centered abortion care is as clear and smooth as possible.” (emphasis added) 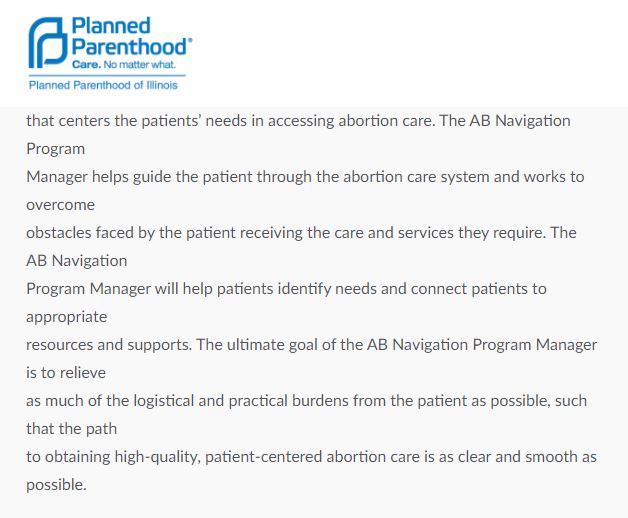 The abortion navigator also secures “late gestational age Abortion services,” which entails finding a location for a woman to abort children later in pregnancy, when they could potentially survive outside the womb (viability). The job description says the navigator will help overcome “obstacles,” but it is unclear whether this includes helping potential abortion clients to skirt various laws that exist to protect both mother and child. Laws concerning late-term abortion exist for this very reason.

Late-term abortions are barbaric, and women are at an increased risk of injury with these procedures. In May of this year, late-term abortionist LeRoy Carhart “mangled” two patients so badly during second trimester abortions at 25 weeks that emergency room workers were reportedly left traumatized by the women’s injuries. The women were left with permanent damage, with one requiring a colostomy bag and one requiring a hysterectomy.

The Navigation Program Manager job description requires the employee to “[t]ake the initiative to proactively resolve barriers” to abortion. Nowhere are these services listed for women who might wish to choose adoption or parenting instead.

Removing all perceived “barriers” to abortion for women may seem helpful at first, but directing women toward the one pregnancy option from which Planned Parenthood makes money is a marketing tactic. This is what businesses do when they want to sell a product or service; they attempt to remove any barriers that might hinder the sale, possibly even throwing in some discounts or other financial incentives and options to seal the deal. Planned Parenthood, in this case, is behaving like a business with a product to sell — abortion, exclusively — and not like a health care provider.

The counselor would say to the teenager, “Well, where’s the $250,000 that it takes to raise a child in society today?” And “What are your parents going to say when they find out that you’re pregnant?” And “What is your boyfriend doing? Is he going to help you? Where is he?” and “How are you going to finish your education if you have a baby? Don’t you know you can’t go to school if you have a baby?” Things like that, very subtle things that will push the girl over and make her decide.

Then they sort of do a “Mutt and Jeff” routine. First will come those questions. Next will come the very motherly, the very soothing, “But we can help you. We can help you out of your problem. Your parents don’t have to know…. We know that you know that you can’t take care of a baby right now. You know that you’re not ready and we want you to do these things when you’re ready.” So they play on the emotions of the young girl who scared, frightened, doesn’t know where to go, but she’s been told this is the place to go to get help.

With an abortion patient navigator on hand whose job is to remove all financial and logistical barriers to abortion, coercion is a potentially significant issue that cannot be ignored.

The Navigator job description also makes clear that the role involves helping teens to obtain abortions without parental knowledge or consent even when state law requires it. Many states have parental consent laws to ensure that parents are notified before their teenage daughters obtain abortions. These laws help to protect minors as well as sex trafficking and abuse victims. Past investigations have already shown that Planned Parenthood has committed abortions on minors who were victims of abuse, and sent them back to their abusers without reporting anything to authorities.

Planned Parenthood acts as a “liaison between minor and attorney” to secure a judicial bypass so a minor can obtain an abortion without parental notification or consent.

The psycho-social needs of abortion patients

Many women and men have reported trauma from abortion, often surfacing years later. Abortion puts women at an increased risk of drug and alcohol use, depression, and suicidal thoughts. The motive for Planned Parenthood’s inclusion of care for “psycho-social needs” is unclear; however, even past Planned Parenthood employees have noted that their facilities included journals in their abortion recovery rooms, which are filled with women’s grief and regret.

Planned Parenthood’s Abortion Navigation Program has the strong potential to pressure women and girls into abortion under the guise of being helpful and caring, while offering no help or care for those who wish to choose adoption or parenting. Committing a record number of abortions in their most recently reported year (345,672), Planned Parenthood has little incentive to enable women to choose anything else.