In 2009, an analysis by Live Action News found that abortion accounted for 22.6 percent of Planned Parenthood’s clinic revenue. Today, that percentage is much larger.

Planned Parenthood has a few revenue sources which they detail in their 2015-2016 annual report. 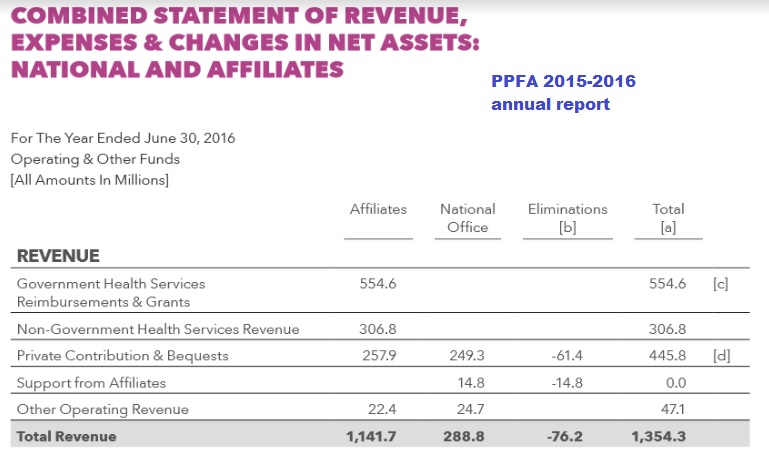 Note that there are two sources of revenue for “health services” which include:

In 2015, Planned Parenthood reported that they performed 328,348 abortions.

And according to a Planned Parenthood report from 2014, non-hospital facilities charged an average of $1,500 for abortion at 20 weeks.

If we break the 328,348 abortion numbers down using percentages from Guttmacher’s most recent abortion data which states that 31 percent (101,788) of reported abortions nationwide were medication abortions and 1.3 percent  (4,269) were greater than 21 weeks, that would leave 222,291 as first-trimester surgical abortions.

By taking the average cost of abortion for each category – and without accounting for inflation- we estimate the following:

That is a lot of money and may be the impetus for why former Planned Parenthood staffers claim PP enforces abortion quotas:

However, even if we include the $554.6 million in government dollars, abortion revenue can be estimated at 19 percent of all Planned Parenthood’s health services revenue.

Then, if we include all revenue sources, abortion revenue would exceed an estimated 12 percent.

Planned Parenthood falsely claims that tax dollars do not fund abortions (even though money is fungible) and the half a billion in forced taxpayer dollars they receive annually are simply reimbursements from Medicaid, etc. Today, despite their claims, legitimate health services, as well as patients, are declining while abortions are on the increase.

But, the real impact of Planned Parenthood’s abortion revenue lies inside the organization’s own annual reports which reveal that, almost every year since 2000, Planned Parenthood’s revenue has exceeded their expenses — not just by a few dollars, but by tens of millions of dollars (yearly surpluses ranging from $12.2 million in 2001 to a high of $155.5 million in 2010). By 2015, according to Planned Parenthood’s own report, the abortion corporation reported an excess of revenue over expenses in the amount of $77.5 million, an increase of nearly 32 percent over from the previous year.

So, why does an abortion corporation which makes a profit almost every year need our tax dollars? Good question!