For years, abortionist Warren Hern has attempted to convince the media that, despite committing late-term abortions, he is an example of what a “good” abortion doctor should look like. However, recent reviews published online by alleged patients suggest otherwise, revealing that patients have called Hern “paranoid and rude” and claim that the late-term abortion doctor speaks “aggressively” to his patients. 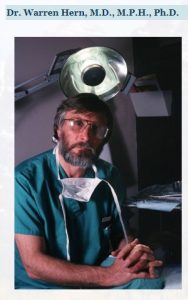 In 1972, Hern “learned to perform abortions at PRETERM Clinic, the first non-profit abortion clinic in the nation’s capital,” according to his online bio. In 1975, he founded the Boulder Abortion Clinic in Colorado along with Christine Ann Hern and Arlen S. Ambrose, where he ends the lives of preborn children in the last trimester. A year later, in 1976, Hern, who once called repeat abortions “self-destructive behavior,” became one of the founding members of the National Abortion Federation serving on its Board of Directors, and its Standards Committee. His website states that “He prepared for publication the first version of the National Abortion Federation Program Standards for Abortion Services, released in 1981.”

But the late-term abortionist later criticized the National Abortion Federation’s so-called standards as “ornamental,” “cosmetic,” and “meaningless,” according to pro-life leader Mark Crutcher in his book Lime 5:

Warren Hern, who claims there is no justification to abortion limits, often speaks out about how he believes the pro-life movement has “demonized” abortionists, “diminished” the status of their positions, and reduced the numbers of abortion providers. He calls “performing abortion” the “lowest status of activity that you can have in medicine.”

As such, Hern claims that “some doctors use that to mistreat not only the doctors but the patients” and he calls offers for help by pro-lifers outside his abortion clinic “psychological rape.”

But recent reviews published online indicate that Hern himself may actually be the one “mistreating” patients.

In April of 2016, an alleged patient of Hern’s called the late-term abortionist a “very rude and paranoid doctor,” claiming she was “scolded” by him for “wearing lipstick” to his abortion facility. She claims she was not told about this “rule” by Hern’s staff but Hern refused to believe the patient and “went off on a rant.”

When the late-term abortion patient, who flew to Boulder from California for the procedure, asked why Hern was so upset that she wore lipstick, she claims Hern arrogantly told her, that “When you put your life in my hands, you better be careful about doing as I say.”

The review, published on the website Vitals.com, states that Hern’s tone was “very condescending and suspicious.” The woman wrote, “I didn’t feel comfortable in his care and opted out.” 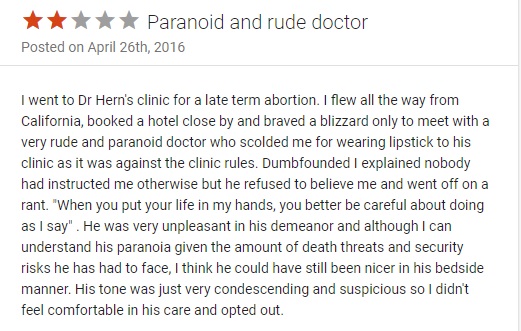 Then on May 9, 2016, another patient wrote a poor review of Hern on the website Health Grades. This woman says that Hern “speaks aggressively and it made me feel uncomfortable and slightly scared.” In addition, the alleged patient claims Hern made her abortion “a terrible experience.”

Interestingly, in 2009, Esquire described Hern as “a tall man […] remarkably vigorous […] emphatic in speech and impatient in manner.”

For years, Hern has put himself out as an expert on abortion. He even worked as an “expert witness” in medical malpractice abortion cases according to a report by the New York Times. According to the article, Hern claimed that “5 to 10 percent of first-trimester abortions are incomplete, leaving behind a few grams of tissue, or even the whole fetal sac. More rarely, abortion causes perforation of the uterus, hemorrhage or infection. Without proper follow-up care, such complications can cause serious injury.”

“There’s a lot of bad medicine being practiced out there in the name of choice,” Hern told the New York Times.

“I testified in an Oregon case against a doctor who really did not do well by a patient. As a society, I think we’ve been in denial about the risks of abortion, both because of ideology, and because of economics. There are a lot of respectable doctors doing a lousy job. It’s not a sin to have a complication, but it is a sin if you have not tried to prevent it. And it’s a very serious sin if you abandon it.”

However, Hern has been accused of malpractice himself.

In 2015, the Denver Post reported that a Nebraska couple filed a lawsuit against Hern and his late-term abortion facility, which is listed as a member of the National Abortion Federation, claiming Hern left a piece of the preborn baby’s skull inside patient Jennifer DeBuhr’s uterus.

DeBuhr also claims that Hern, the so-called “expert” in abortion care, failed to warn her of the potential risks associated with her late-term D&E abortion.

Hern, who once got upset that the BBC called aborted children “unborn child” and offers women private burial services, uses the D&E (dilation and extraction) procedure and once authored a study on the effects of D&E abortion called What about us? Staff reactions to D&E, where he detailed the negative effects that witnessing abortions had on his staff.

Hern on staff reactions to D+E

D&E abortion also known as Dismemberment (dilation and extraction) abortion is the most common form of late-term abortion during the second trimester. In this abortion procedure, the child is torn apart one limb at a time. Former abortionist Dr. Anthony Levatino describes a D&E abortion in the video below:

The DeBuhr lawsuit states that Hern’s clinic staff was unable to get the patient to properly dilate, nonetheless, Hern went ahead with the procedure.

According to Operation Rescue, a “numbing cream” was applied to DeBuhr’s cervix and Hern began to remove the dismembered parts of her baby. During the process, DeBuhr felt “a lot of pulling from the lower half of her body all the way up to her chest,” according to the legal complaint.

The pain was intense – so much so that at some point in the process, she passed out.

The fetal skull fragment allegedly became lodged in her uterus, and according to the claim, “penetrated Plaintiff Jennifer DeBuhr’s uterine wall and led to menorrhagia and ultimately the necessity for Plaintiff to undergo a hysterectomy.”

The couple is seeking upwards of $75,000 in medical costs, in addition to attorney fees and any punitive damages that might be awarded by the Court, Operation Rescue reports.

Hern claims that he gives his abortion patients the “safest possible medical care in a humane and dignified environment.” It would appear that at least some patients disagree.