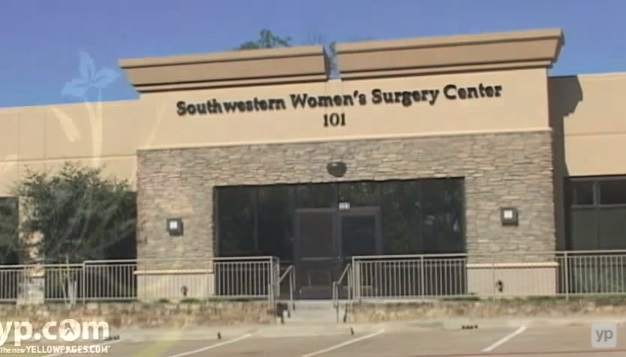 There appears to be a bad run for late-term abortion facilities receiving poor reviews online from clients. Live Action News recently highlighted comments published against Warren Hern’s Colorado facility with alleged clients claiming the abortionist “speaks aggressively” and was “very condescending and suspicious”. Alleged patients who sought abortions at a late-term facility located in the nation’s capital, operated by abortionist Cesare Santangelo, called his Washington Surgi-Clinic the “Worst place ever” describing it as “a meat market”.

Now, reviews published about a later term abortion facility in Dallas, Texas is also receiving poor reviews from alleged clients. Southwestern Women’s Options (SWO) is one of a handful of abortion facilities in the nation which commits late-term abortions. It is owned and operated by Curtis Wayne Boyd, which has facilities in both Albuquerque, New Mexico where they commit abortions through 28 weeks of pregnancy as well as Dallas where they end the lives of preborn children up to 21 weeks.

Boyd employs a number of abortion doctors, some who were mentioned in reviews Live Action News uncovered.

Boyd’s Dallas facility received several critical Google reviews, with many comments alleging long wait times at SWO. But, some were complimentary, like this one which began, “I called planned parenthood first, the lady who answered was very short with me when I asked prices and said ‘thank you for calling’ and hung up right away.  When I called here, I spoke to Melinda and she was so nice to me and answered all my questions and more.”

Many published reviews of the Dallas abortion facility were very critical.

Another woman wrote, “The staff was evil.”

Although Boyd brags online that he is, “recognized for his expertise in pain management and minimizing surgery risk” and also claims that he helped establish “the National Abortion Federation (NAF) and is a founding member of the Federation’s Board of Directors” reviews left on Google indicate his facility’s ability to manage pain may not be as good as he claims.

One alleged patient complained that, “The part that i dont like is that I see,heard,and feel everything….i feel a lot a pain…”

In 2006, a patient at Boyd’s New Mexico facility filed a lawsuit against him after she suffered severe pain which “caused her to move about on the table, forcing the doctor to stop the procedure several times,” and because the clinic could not find an anesthesiologist they suggested the abortion patient go to a hospital to finish the procedure. According to the lawsuit, “Dr. [Thomas] Hall advised Plaintiff that one option was to find a doctor at a hospital who would perform the procedure.  Although no hospital in New Mexico takes patients directly for elective abortions, Dr. Hall informed Plaintiff that the University of New Mexico Hospital allows for exceptions, such as referral of patients with complications.” As a result, in an attempt to finish what SWO started, that physician, “unknowingly extracted Plaintiff’s right ureter, the tube connecting the kidney to the bladder.”

Pain during abortion is not uncommon and neither are complications.

In fact, nine months ago, another alleged patient at the Dallas SWO abortion facility, also accused the abortion facility of leaving her with an incomplete abortion, she wrote in part, “At southwestern, I felt it. It hurt. Briefly, it only lasted two minutes and they had me out the door. A few weeks later I go to the hospital for unrelated reasons and they tell me I’m pregnant. I said it was a mistake, I had a surgical abortion. They did a sonó and there is still tissue in me causing me to read as pregnant even though I’ve had my menstral. This is potentially life threatening and I will be contacting an attorney. Please make sure you get an experienced doctor. This could potentially leave me barren.” 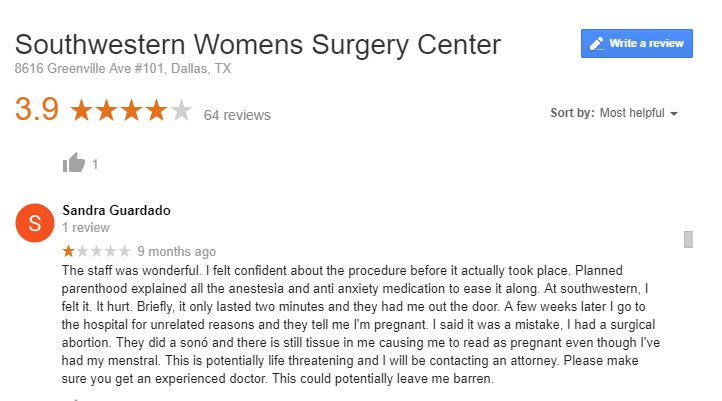 Around that same timeframe, Lauren claims the staff tried to pressure her into an abortion. She gave this scathing review, “Disgusting place pushes abortion on anyone regardless of whether we think our pregnancy is a gift or not. This is a person. That is so sick that for basic screenings they would push a political viewpoint on me. I am glad I am having a baby and even if I did not want her I would give her to someone else.”

Alleged patient Anil warned, “Please avoid this clinic. Long wait and not at all helpful.” 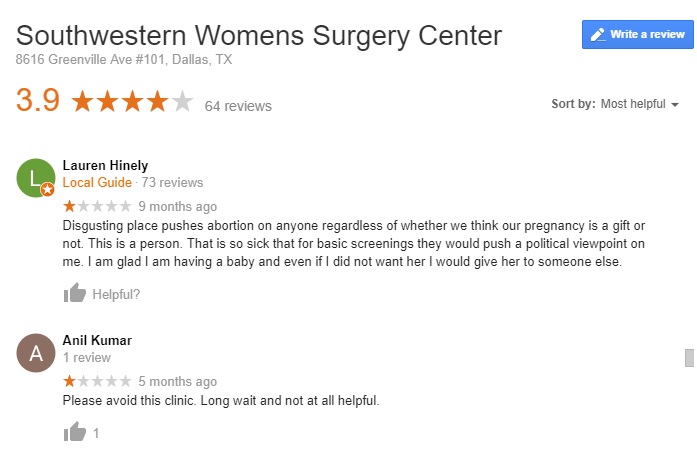 In 2013, Live Action released undercover video from their, Inhuman investigative series which exposed abortion doctors at Southwestern Women’s Options in Albuquerque revealing disturbing aspects of the facility’s protocol, including the practice of leaving women alone in hotel rooms to deliver their dead children.

SWO abortion doctor Carmen Landau echoed this advice, telling the Live Action investigator to “sit on the toilet” and “unlock the hotel room.”

“Just sit there,” Landau says, “and you would not move until we come and get you.”

Live Action News published a report detailing how Boyd and his late-term abortion facility have been mired in controversy on a national level since coming under fire by a congressional committee for his work with the University of New Mexico, where the abortionist serves as adjunct faculty. In 2016, Select Investigative Panel on Infant Lives, issued a subpoena against SWO in NM, relating to charges that abortion and Planned Parenthood facilities are selling aborted baby body parts for research. Late last year, a patient of SWO filed a lawsuit against owner Curtis Boyd and abortionists Carmen Landau and Shelley Sella, for failing to detail the clinic’s collaboration with the University of New Mexico, the sole recipient of fetal parts where Boyd works.

Whether abortion facilities receive good or poor reviews, all abortions take the lives of innocent preborn children and sometimes their mothers as well. This is something Southwester’s founder Boyd is well aware of having admitted once that, “Yes, I am” killing.