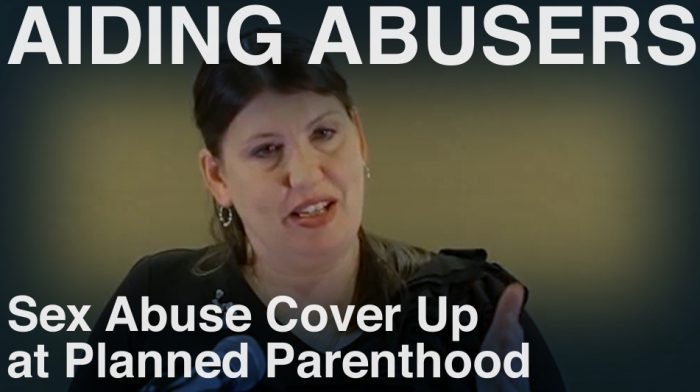 Live Action’s Aiding Abusers docuseries, exposing how Planned Parenthood aids sexual abusers by failing to report child sexual abuse, makes it clear that the taxpayer-funded organization views children not as potential victims but more as “animals” who are unable to control their sexual appetites. In the latest release from the the Aiding Abusers docuseries, former Planned Parenthood workers reveal how the organization treated victims of sexual abuse:

In her introductions of the Former Workers video, Live Action president and founder Lila Rose points out:

When it comes to reports of sexual assault and sexual harassment, Planned Parenthood has used the slogan that we should ‘trust women,’ so lets’s follow that advice and listen to the testimonies of these four women who are former Planned Parenthood workers and managers who all say the same thing, that Planned Parenthood routinely covers-up child sexual abuse. 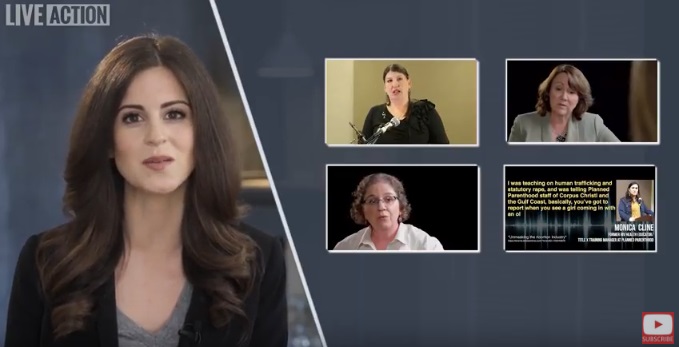 In the video, former Planned Parenthood employee Catherine Adair observed how the organization routinely allowed sexual abusers into the counseling rooms with their victims. When Adair objected, she was scolded and told that the victims were better off with abortions.

“There’d be girls coming in with their abusers…. Even if I went to the manager and I said, look, there’s something going on here, she would say, ‘She’s better off with the abortions. We can’t do anything about what’s going on at home but at least we can give her the abortion.’” 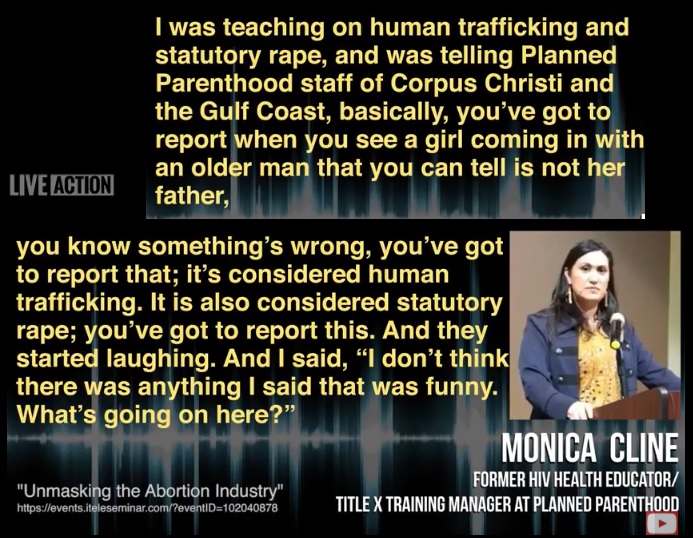 She went on to state, “And I said, ‘I don’t think there was anything I said that was funny. What’s going on here?’ And the response was, ‘Honey, if she’s not having sex with this man this week she’ll have another one next week.’”

Think about that response for a moment. If what Cline is saying is correct, victims of sexual abuse are seen by this abortion corporation as simply promiscuous and in need of abortions and birth control, rather than protection from sexual predators. And that is exactly what Cline went on to describe, noting that, in her opinion, Planned Parenthood sees potential victims of child sexual abuse in a “distorted” way (emphasis added):

And so their view of our children is distorted. It’s dehumanized. I don’t know why their hearts are hardened, but they are. And so when a girl or a young man goes there for an abortion, or condoms or testing, they don’t see them with compassion anymore, if they ever did. Um, they see them as just, almost like an animal who can’t control themselves; they’re always gonna have sex so we’re just going to give them enough lube and condoms and hope they come in to get tested before they get some kind of cancer. They’re not gonna stop statutory rape.

Um, one of the things that they even mentioned was, they adopted [a] don’t ask, don’t tell [policy]…. If we don’t ask how old her partner is, we don’t have to tell. And so, Planned Parenthood actually allows victims of human trafficking to continue to be victims of human trafficking. And they’re okay with that. I went back to my office and I told my supervisor, like — listen, I’m trying to teach them about key concepts on Title X; they’re admitting that they’re not gonna report cases of statutory rape.

The response from my supervisor was, “Your job is to teach them key concepts, and that’s it.” She was really upset with me that I challenged that.

Former Planned Parenthood manager Sue Thayer stated that Planned Parenthood was more concerned about potential “trouble” from the victim’s family or boyfriend than they were about the victim. Thayer told Live Action, “We were all required to be mandatory reporters, but if we saw a case… uh… questionable abuse, or even for sure — I mean, this kid is being abused – um, we really were discouraged from calling it in, just because, uh, they didn’t want to have the trouble, the angry parent, uh, the angry boyfriend, whatever it was. So, more than once I was told, ‘No, that is not reportable – you don’t need to call it in.’”

Former Planned Parenthood employee Marianne Anderson also testified to a systemic cover-up of sexual abuse at the abortion corporation. She described an Asian girl who came to Planned Parenthood with a very controlling man who even talked for the girl. The girl described living in a place with many other young women, little food, and little clothing. Perhaps you and I can read between the lines here, but for Planned Parenthood, no alarm bells were raised and all they saw were dollar signs for the abortion.

When Marianne was asked how she felt about the lack of concern Planned Parenthood had for this potential victim, she responded, “Degraded, like women don’t really matter.”

These former staffers are not alone. Victims themselves have pointed out Planned Parenthood’s willingness to be complicit in sexual abuse.

One victim’s story, published anonymously by Feminists for Life, claims that when she was abused at the age of 12 by both an older brother and a college-age friend of the family, Planned Parenthood’s only concern was how often she was having intercourse, not who may have impregnated her:

[M]y older brother took me to Planned Parenthood…. The whole visit was terrifying. No one explained anything. I was examined, gave urine and blood samples, and shown a chart of an egg going around a big circle marked by days of the month. I was asked questions like, “frequency of intercourse?” and “method of birth control preferred?” I did not know what intercourse meant, so I just said “a lot,” and I had no idea what methods of birth control existed. No one asked who my “partner” was; no one expressed any dismay, concern, or even interest that a 12-year-old girl needed a pregnancy test. I heard a lot about “being responsible” and “taking control of my body.

Someone gave me a handful of condoms on the way out and made a joke about it being an assortment — red, blue, and yellow. The yellow ones were called Tinglers. I stuffed them in my purse and threw them away later.

My older brother maintained a strong silence throughout the entire time — no one asked him a single question.

The victim claims that she ended up starting her period and did not keep the abortion appointment. In addition, she states that the sexual abuse ended only after one predator moved away and the older brother set his sights on other victims from the neighborhood.

Sadly, this girl’s abuse — and many other victims’ abuse — may have been prevented if Planned Parenthood had bothered to ask about potential abuse.

Live Action is releasing this report as the Time’s Up movement is exposing both sexual abusers and those who help them cover up their crimes — the people who knew about the abuse but stayed silent. While Planned Parenthood has attached itself to the Time’s Up movement, the movement should be calling out Planned Parenthood for decades of enabling sexual abusers.