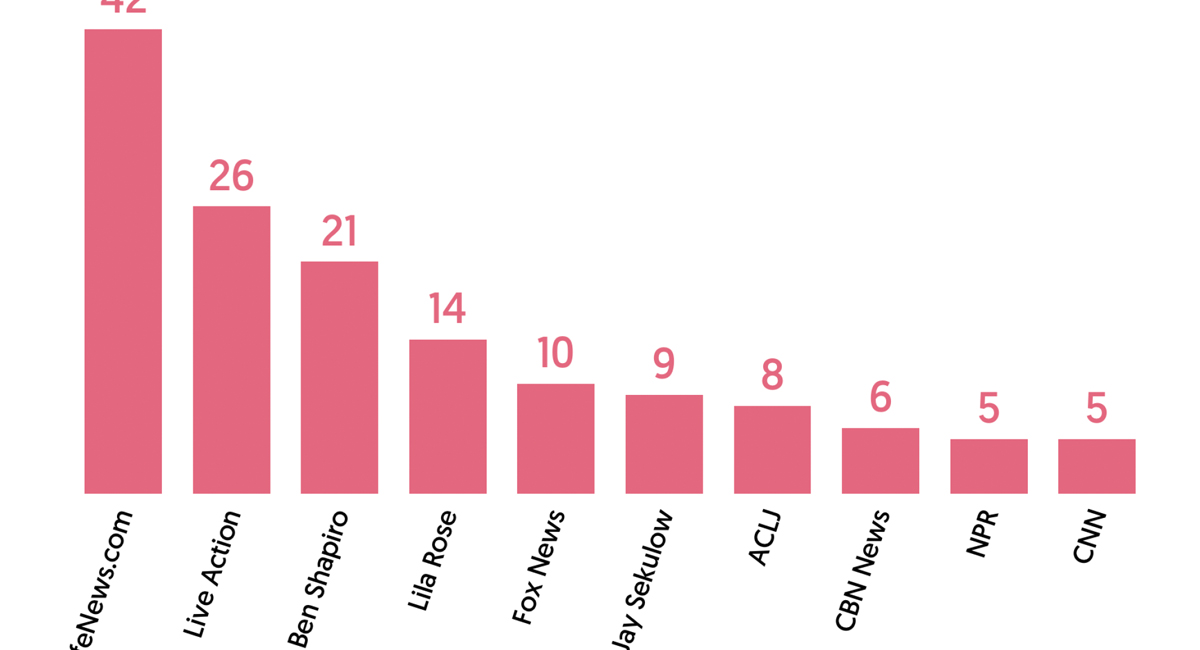 Media Matters for America, a highly partisan “progressive research and information center dedicated to comprehensively monitoring, analyzing, and correcting conservative misinformation,” according to its own self-description, is going hard after pro-life news sources, including Live Action and founder Lila Rose. Claiming in the very first paragraph of its article that sites like Live Action use “sensationalized anti-choice rhetoric and harmful misinformation,” the clearly biased “research” center appears to be attempting to get pro-life sites labeled as harmful “fake news.” In actuality, what Media Matters did was show Live Action’s powerful messaging is changing hearts and minds. Media Matters writes:

A Media Matters study of top-engaged U.S. abortion-related coverage on Facebook in the month of April found that 63% of links with the most Facebook interactions came from right-leaning websites, and 72% of the Facebook page posts with the most interactions came from right-leaning pages. Two anti-abortion websites, LifeNews.com and Live Action, made up almost 30% of viral links, and the two main Facebook pages affiliated with these sites made up more than a quarter of the most popular Facebook posts….

When combined (seen in chart below), Live Action and Live Action president Lila Rose had 40 of the top Facebook page posts about abortion-related coverage in the U.S.: 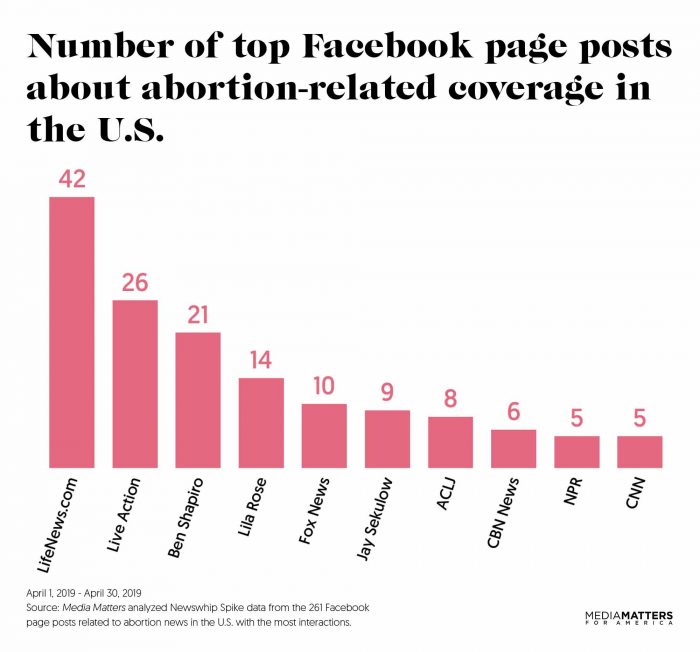 In the chart below, you can see that combined, Live Action and Live Action president Lila Rose actually lead all others, with 702,618 total interactions on Facebook: 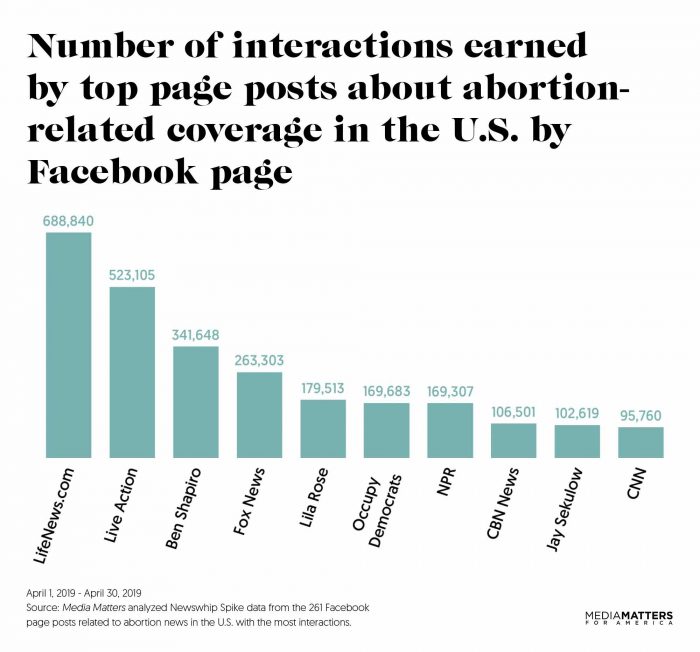 But further reading in to Media Matters’ accusations reveals the organization is grasping at straws. First, it takes issue with pro-life organizations’ coverage of what many refer to as “heartbeat bills,” or bills that ban abortion once a preborn child’s heartbeat can be detected, usually around six weeks. But in an effort to debunk groups like Live Action, Media Matters uses “medical experts” — otherwise known as doctors who abort children for a living — to claim that preborn children don’t even have heartbeats.

Good call, Media Matters: be sure to quote as impartial the people who stand to profit the most from getting the public to believe that “cardiac activity” doesn’t indicate life.

Top-engaged content from right-leaning sources often pushed anti-abortion misinformation. Twenty-three percent of links from right-leaning websites reviewed in this study pushed for six-week bans on abortion (also inaccurately referred to as “heartbeat bills”) based on the anti-choice claim that abortion should be banned as soon as fetal cardiac activity is detected, typically by six weeks. Medical experts, however, say “cardiac activity isn’t a credible measure of fetal viability.” Right-leaning websites and pages also shared false stories about Democrats supporting “infanticide” (they don’t) and anti-conservative censorship by social media platforms (there is none).

First of all… how is supporting a six-week ban on abortion once a heartbeat is detected, “anti-abortion misinformation”? Media Matters doesn’t clarify. In addition, the argument from pro-lifers has never been about “fetal viability” — it’s always been about recognizing humanity from the moment of fertilization.

The hyperlinked source in the quote for medical “experts” above actually links to a Huffington Post article featuring Dr. David Eisenberg, an abortionist and medical director at Planned Parenthood of the St. Louis Region (infamous for his apparent cluelessness about hand washing protocols at his abortion facility), as well as Dr. Rebecca Cohen, a Denver-area abortionist. Super impartial experts, there. But the Huffington Post author writes, interestingly enough, that one of the abortionists agrees that the heartbeat is detected at five to six weeks:

A fetal heartbeat is typically detectable at around five or six weeks into a pregnancy, according to Dr. Rebecca Cohen, an assistant professor of obstetrics and gynecology at the University of Colorado.

This is exactly what Live Action and Live Action News have reported — again, and again, and again. However, Cohen also claims “it’s not a fully formed heart.” But the preborn child’s heart is actually pumping blood by five weeks gestation (heartbeat begins between 16 and 21 days, a known and accepted fact), and is fully formed by 10 weeks gestation.

Newsflash: When your medical experts are the abortionists who kill children with “cardiac activity” for a living… you’re not being impartial.

Media Matters even links to Rewire, formerly known as RH Reality Check, as a source of its information — a pro-abortion website with many authors who quite literally are employed by the abortion industry.

The “research” group claims pro-life groups are spreading “… the idea that Democratic politicians are endorsing “infanticide” by supporting abortion access later in pregnancy.” Perhaps Media Matters is being deliberately obtuse here, because the idea that these politicians “endorse infanticide” comes from the fact that they refuse to support legislation protecting infants who actually survive abortion procedures. In the U.S. House alone, Democrats have refused to even allow a vote… more than 50 times.

In addition, Media Matters gets it wrong about the suppression of Live Action’s content by Twitter and Facebook, claiming, “Live Action has sent multiple fundraising emails to supporters alleging that the organization’s content is ‘being suppressed’ by Twitter and Facebook. However, posts from Live Action and the organization’s founder, Lila Rose, together accounted for a larger share of top Facebook posts related to abortion coverage (15.3%) than all left-leaning pages combined (12.6%).”

What Live Action has actually reported with regard to these social media platforms is that it has been banned from running ads, while pro-abortion groups like Planned Parenthood are allowed advertise freely on the platforms. Twitter, for example, required that in order for Live Action to be approved to run ads, the pro-life organization would have to remove pro-life content (such as ultrasounds) from its own website. (The link includes actual screenshots of communications between  Twitter and Live Action.) Facebook has also suppressed Live Action ads.

Media Matters is again showing its true pro-abortion (and George Soros-funded) colors while attempting to get Live Action and other pro-life news sources labeled as “fake news.” But when it comes to providing any proof, Media Matters falls flat, counting on the public to believe their accusations rather than fact check… well, anything.

The free expression of ideas — even those with which you don’t personally agree — is crucial to a free society.

Most of the public identifies with pro-life beliefs, as polling shows. Perhaps that’s the simple reason why pro-life groups are dominating abortion coverage on social media.