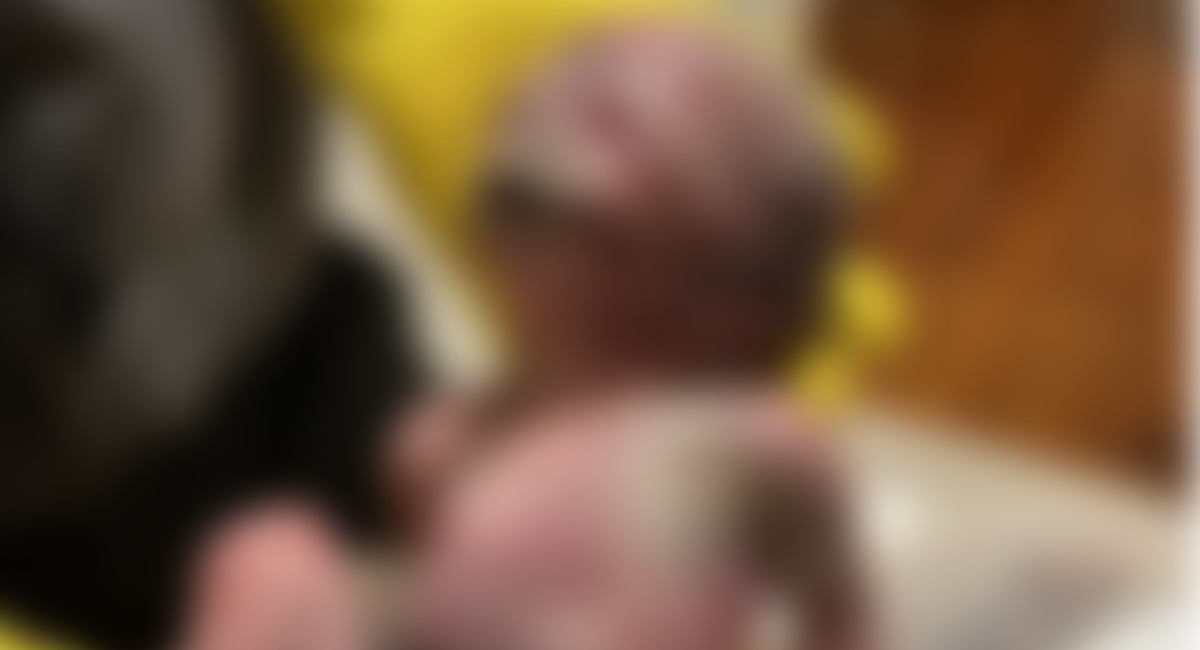 Last week, dark truths of the abortion industry came to light when pro-life activists exposed possible illegal late-term abortions and infanticide occurring at an abortion business in Washington, D.C. As the heartbreaking images of the five babies who appear to have been killed late in pregnancy, one estimated to possibly be as old as 32 weeks, continue to spread across social media, major media outlets are ignoring the facts concerning the recovery of these children. Here’s what you need to know.

According to PAAU Founder and Executive Director Terrisa Bukovinac and PAAU Director of Activism Lauren Handy, the two women went to Washington Surgi-Clinic on this date, an abortion facility owned and operated by abortionist Cesare Santangelo, “to engage in anti-abortion advocacy.” The activists stated that when they arrived at the facility, a truck from Curtis Bay Medical Waste Services was parked outside. They noticed two large boxes marked with biohazard symbols next to the truck and asked the driver if he was aware of what was in the boxes. He told them he didn’t know, so they informed him there were likely aborted children inside.

“After he confirmed the boxes were from Washington [Surgi-Center], I asked him, ‘Would you get in trouble if we took one of these boxes?’” Bukovinac explained. “And he asked, ‘What would you do with them if you took one?’ Lauren said we would give them a proper burial and a funeral.” According to the two activists, the driver then gave them permission to take one, so they brought the box to Handy’s apartment.

The activists said that with a Catholic deacon present, Handy opened the box. Inside was a red plastic bag in which they discovered the remains of 110 aborted babies, mostly of first-trimester age. Under that was a plastic bag containing five babies whom experts have stated were likely old enough to have survived outside the womb. One of the babies, whom activists have since named “Harriet,” had an incision on the back of her neck that could indicate the use of the federally banned D&X abortion procedure more commonly known as partial-birth abortion. Other intact babies found in the bag could have been killed by infanticide after surviving the abortion procedure. In a 2013 Live Action undercover investigation abortionist Cesare Santangelo noted that his method of killing preborn babies does not involve use of an injected feticide, but instead, he cuts the umbilical cord and waits for the child to die by cardiac arrest. He also said if a child survived an abortion at his facility, he and his staff “would not help it” to ensure survival.

After activists arranged for a funeral Mass for all 115 babies, the 110 smaller children were given a respectful burial. Over the course of the next three days, the pro-lifers searched for an independent pathologist to confirm how the five older babies might have died, and contacted D.C. police themselves to have the bodies picked up so that their deaths could be investigated.

Privately arrangements were made for the Metropolitan Washington D.C. Police homicide unit to pick up the five older babies for forensic examination. Attorney Steve Cooley penned a letter to the Chief Medical Examiner Francisco J. Diaz and Police Captain Carols Heraud of the Investigative Services Bureau Homicide Branch, stating, “I have been contacted by an entity that very recently came into possession of … fetuses. […] It appears some of the fetuses were a result of late-term abortion(s) or possibly live birth abortions.” 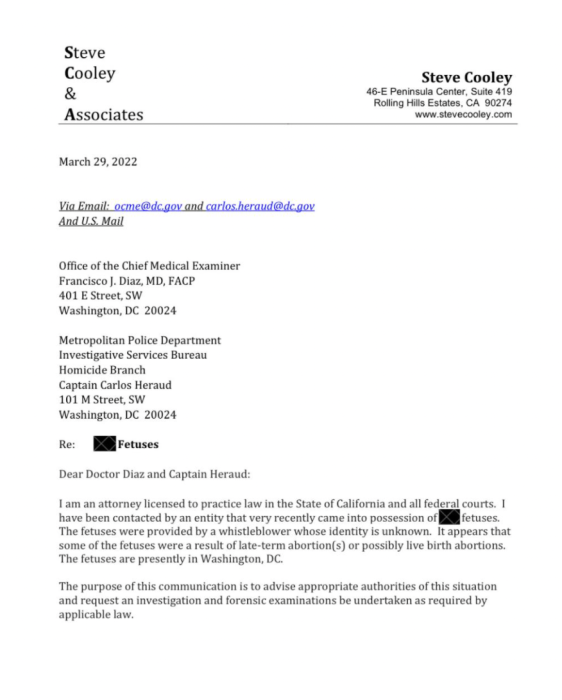 He continued, “The purpose of this communication is to advise appropriate authorities of this situation and request an investigation and forensic examinations be undertaken as required by applicable law.” He asked for them to contact him for the next steps.

On this date, nine pro-life activists, including Handy, were arrested by the FBI in connection with pro-life activism that took place two years prior on October 22, 2020, in Washington, D.C. The activists had been indicted by a federal grand jury in February on Federal Civil Rights Conspiracy and Freedom of Access to Clinic Entrances Act (FACE Act) offenses for entering the Washington Surgi-Clinic for the purpose of reaching women seeking abortions. Under the FACE Act, it is a federal crime to intentionally use force, threats, or physical obstruction to attempt to prevent a person from “obtaining or providing reproductive health services” such as undergoing an abortion. If convicted, the pro-lifers could face up to 11 years in prison, three years of supervised release, and a fine of up to $350,000.

Hours after the arrest, police arrived at Handy’s apartment, where the babies they had been previously informed about by Handy and Bukovinac were located.

Live Action broke the news of the discovery of the babies, with physician experts telling Live Action News that the five older babies appear to have been old enough to survive outside the womb. Dr. Robin Pierucci, a neonatal specialist, told Live Action News: “I can say with confidence that [four of] these babies died at an age when they were viable, premature people.”

This same day, D.C. police held a press conference, dismissing the possibility that these viable babies were killed illegally, despite the fact that no investigation or autopsies had been performed, and despite Santangelo’s admission that he would not provide life-saving care to abortion survivors in accordance with the law. Late abortions are legal in Washington, D.C. — however, the D&X partial-birth procedure is federally banned and it is illegal to kill or fail to provide medical care to a baby who survives an abortion.

On this date, PAAU activists held a press conference detailing the events of the prior week, emphasizing the fact that they contacted police to retrieve the bodies from Handy’s apartment. During the press conference, it was revealed that Curtis Bay Energy burns medical waste for electricity for the Baltimore area. Because the Curtis Bay Energy truck was picking up medical “waste” that was actually the bodies of aborted babies, the company now stands accused of burning human beings to create energy.

As reported by Live Action News, according to the Curtis Bay Energy website, the company has the largest medical waste incinerator in the country, and is “the only facility in the Northeast Region that utilizes Waste-to-Energy incineration to safely convert infectious/biomedical waste and non-hazardous pharmaceuticals into useful energy.” The process begins with “collection personnel” who transport the “material” to their autoclave or incineration disposal facilities.

Photos show Curtis Bay Energy stamped on the box that contained the the babies’ bodies, as well as on other boxes on the scene outside of Washington Surgi-Clinic; however, Curtis Bay Energy has denied any involvement in transporting fetal remains or using them to make electricity.

That same day, members of Congress sent a letter to D.C. Mayor Muriel Bowser and Police Chief Robert J. Contee III calling for a thorough investigation into the cause of death of the five older babies.

Live Action News also reported on April 5 that several medical experts noted their belief that the federally banned D&X partial-birth abortion procedure may have been used to kill at least one of the babies.

On this date, pro-lifers gathered outside of Mayor Bowser’s office to demand an investigation into the children’s deaths.

On this date, the Survivors of the Abortion Holocaust and Stanton Public Policy Center/Purple Sash Revolution hosted a rally outside the Washington, D.C., medical examiner’s office and morgue where the babies are being kept.

This same day, federal legislators — including 23 senators and 46 representatives — sent a letter to Attorney General Merrick Garland, asking the United States Department of Justice to investigate the babies’ deaths.

Also on April 8, Mayor Bowser replied to the letter Congress sent to her on April 5. In it, she claimed that the DOJ should investigate Handy for recovering the aborted babies’ bodies and exposing possible infanticide, rather than investigate how these children were killed and whether a federally illegal abortion procedure or infanticide were committed.

Editor’s Note: This post may continue to be updated.