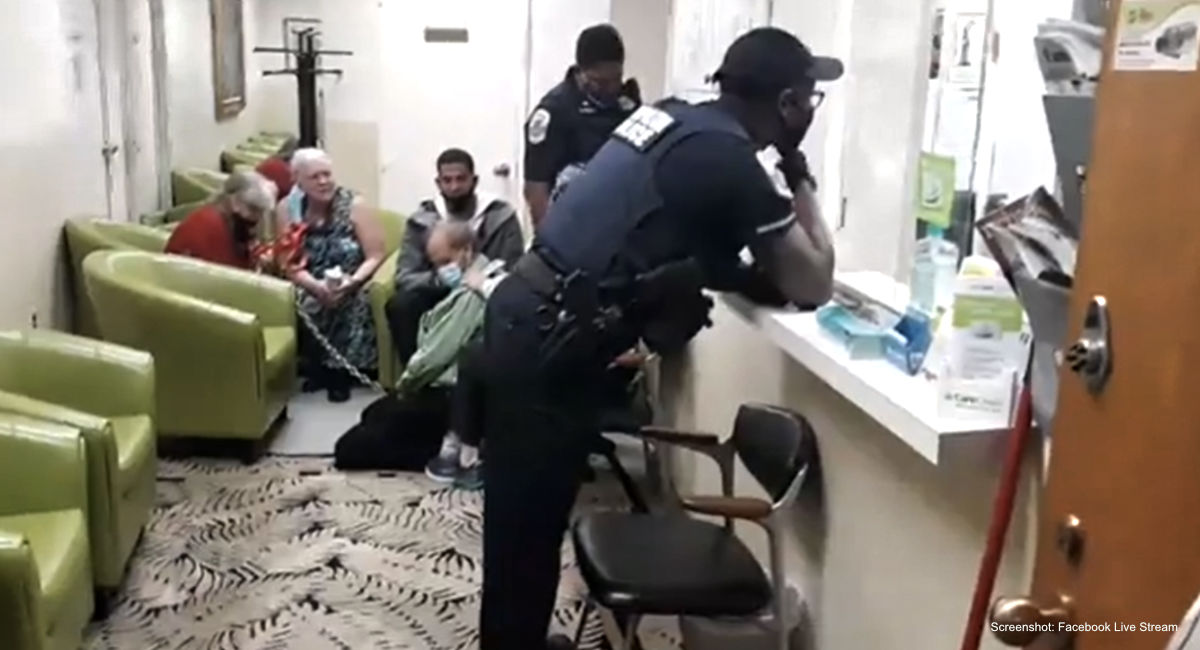 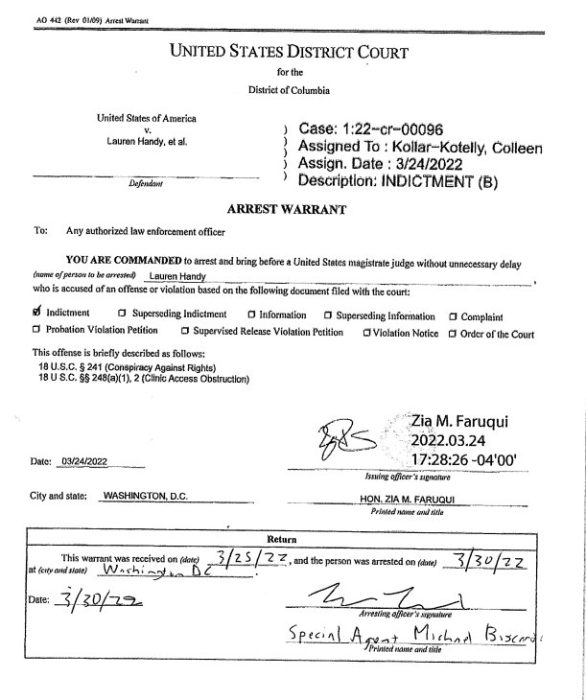 The two-count indictment alleges that the defendants “did willfully combine, conspire, and agree with one another … to injure, oppress, threaten, and intimidate patients and employees” of the Washington Surgi-Clinic in Washington, D.C. on October 22, 2020.

According to the indictment, the defendants “create[d] a blockade to stop the Clinic from providing, and patients from obtaining, reproductive health services.” This was allegedly accomplished by “communicating … in advance,” traveling to D.C. from other states, “us[ing] deception to gather information about and gain access to the Clinic,” “us[ing] force to enter the Clinic, and to obstruct access to and the functioning of the Clinic,” and “barricad[ing] themselves inside the Clinic” using tools, “including ropes and chains.”

Lauren Handy, and others, got arrested by the FBI today. It is believed it had to do with a Red Rose rescue she participated in two years ago. Please pray for Lauren and specifically ask that she finds good legal representation. #ProLife ⁦@LiveAction⁩ ⁦@LifeNewsHQ⁩ pic.twitter.com/9wmSIA501t

The rescue action in question was live-streamed on Facebook by DC Area Anti-Abortion Advocacy. According to the indictment, a nurse stumbled and sprained her ankle as a result of the action; however, although the same document alleges that the defendants “did by force … intentionally injure … and attempt to injure” an unnamed “patient,” no overt acts of violence on their part are described therein.

It appears from the live stream that law enforcement arrived quickly on the scene, within minutes.

At the time of this writing, all defendants except Handy had been released from custody.

The Freedom of Access to Clinic Entrances (FACE) Act of 1994, under which the defendants have been indicted, makes it a federal crime to intentionally use force, threats, or physical obstruction in order to intimidate or interfere with a person who is “obtaining or providing reproductive health services.”

It also makes it a federal crime to similarly interfere with religious worship services, although it appears prosecution under the act has been primarily used against those accused of interfering with abortion facility operations.

If convicted, the defendants could each face up to 11 years in prison, three years of supervised release, and a fine of up to $350,000.