Is there truth to Panned Parenthood’s claim that the taxpayer funding they receive annually — to the tune of half a billion dollars — is simply a reimbursement for services rendered under Medicaid? The abortion profiteer’s president, Cecile Richards, recently told a Connecticut news outlet:

We are not in the federal budget. We get reimbursed just like every hospital in America for preventative health care service.

The whole term “defunding” is very misleading. Planned Parenthood does not get a Publisher’s Clearinghouse check for $500 million dollars. We’re not a line item in the budget – we’re not in what the proposals for the President says. We get reimbursed for services.

The average listener to these talking points might believe that they sound reasonable. After all, Planned Parenthood provides low-income women a service, then Medicaid is billed, and finally Planned Parenthood is reimbursed. Right?

Pro-lifers contend that since money is fungible and Planned Parenthood is the largest provider of abortions in the nation — garnering over 34 percent of the national market share — the organization should not be given any federal dollars. The money should instead be given to the thousands of Federally Qualified Health Centers (FQHCs) which offer the same legitimate health services, without the added controversy of abortions. And they outnumber Planned Parenthood centers 20 to 1.

Ms. Richards likes to talk about how the organization is a health care provider, in that it does cancer screenings (no Planned Parenthood clinic has a mammogram machine), birth control, and checkups — but in reality that’s not what generates their income.

A whopping 86 percent of the organization’s non-government provided revenue is garnered from the abortions it provides, generating a significant portion of its profit. Moreover, there’s been several cases where Planned Parenthood has, in fact, billed taxpayers for abortions.

You see, the Hyde Amendment prohibits federal funds from being used specifically for abortions, but it doesn’t account for state dollars, vis-a-vis Medicaid programs. Seventeen states allow for elective abortions to be reimbursed by Medicaid. According to research compiled by Toomanyaborted.com, in California alone, it appears taxpayers foot the bill for about 80,000 abortions a year.

The truth is that there are several additional funding streams from federal agencies, other than Medicaid, to Planned Parenthood. As Live Action News has detailed previously, one way taxpayers are funding Planned Parenthood is through grants under the Affordable Care Act’s Navigator program.

This program has been funneling dollars to the abortion corporation for years. In 2015, The Hill published a report detailing how the Obama administration had awarded more than $1 million in grants to Planned Parenthood to promote the Affordable Care Act (ObamaCare).

A study conducted by the Government Accountability Office in 2015 found that in addition to Planned Parenthood Federation of America, several Planned Parenthood affiliates (which are separate entities) also receive federal dollars. The chart below shows the federal agencies some of those dollars flowed from between 2010 and 2012: 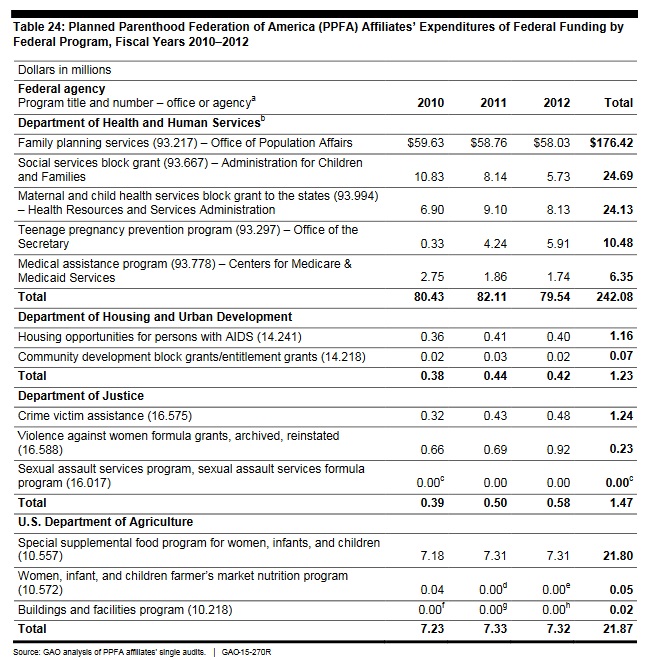 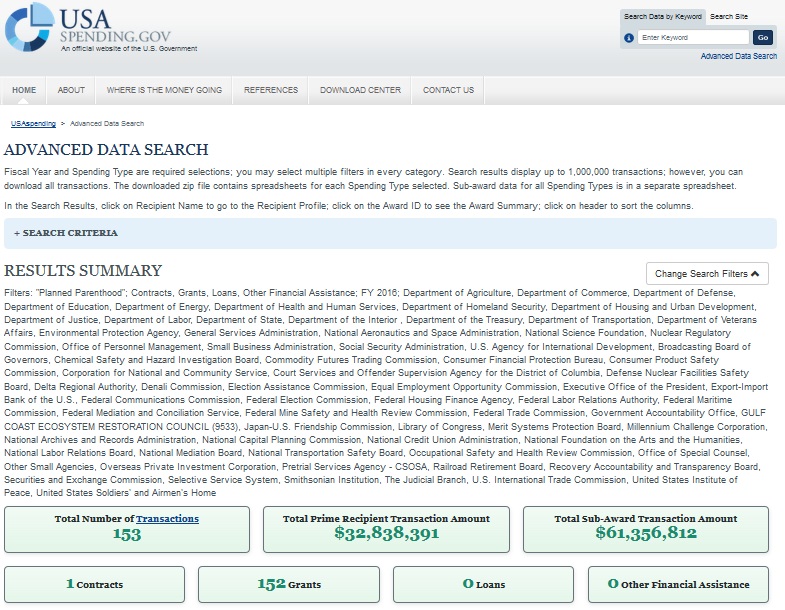 An example of the size of funding just one affiliate might receive can be seen in a report from the Tri-City Herald. In 2015, the U.S. Department of Health and Human Services Office of Adolescent Health allocated $950,000 a year for five years to Planned Parenthood of Greater Washington and North Idaho for “teen pregnancy prevention programs.”

And this doesn’t even begin to touch the state dollars being sent into Planned Parenthood’s coffers through a variety of funding sources.

There are numerous reasons taxpayers should not be forced to fund Planned Parenthood, beginning with the over 320,000 abortions they perform annually.

In addition, the gruesome undercover videos from the Center for Medical Progress exposed high ranking staffers at Planned Parenthood haggling over the price of the body parts of children aborted at several of their facilities.

For this, Planned Parenthood was investigated by a U.S. House Committee, which recommended criminal referrals for some affiliates based on the Committee’s findings, and also recommended a complete defunding of the organization:

The Panel found that Planned Parenthood affiliates and clinics have repeatedly neglected their fiduciary duty requiring good stewardship of federal taxpayer dollars through the following: careless management and failed compliance with Medicaid billing procedures; violating federal laws and regulations pertaining to patient consent and the privacy rights of their patients; changing the method of abortion to increase procurement of fetal tissue for which they received a per tissue payment; and a general disinterest in clinical integrity. The Panel recommends that Planned Parenthood lose all federal funding, including reimbursements for Medicaid services.

In addition, a House Oversight Committee summary, which appears on the Committee’s website, states the following:

As a business, Planned Parenthood is far from trustworthy.

Live Action News has reported (here and here) how Planned Parenthood has failed to report child sexual abuse in many instances, in what appears to be a violation of the federal Title X Family Planning Program, the very program which currently funnels millions of tax dollars to the abortion organization.

A 2017 report, conducted by the Charlotte Lozier Institute and Alliance Defending Freedom, looked at publicly available audits and discovered several egregious examples of fraud and abuse associated with Planned Parenthood.

The study found (among other abuses):

It is time to defund Planned Parenthood.