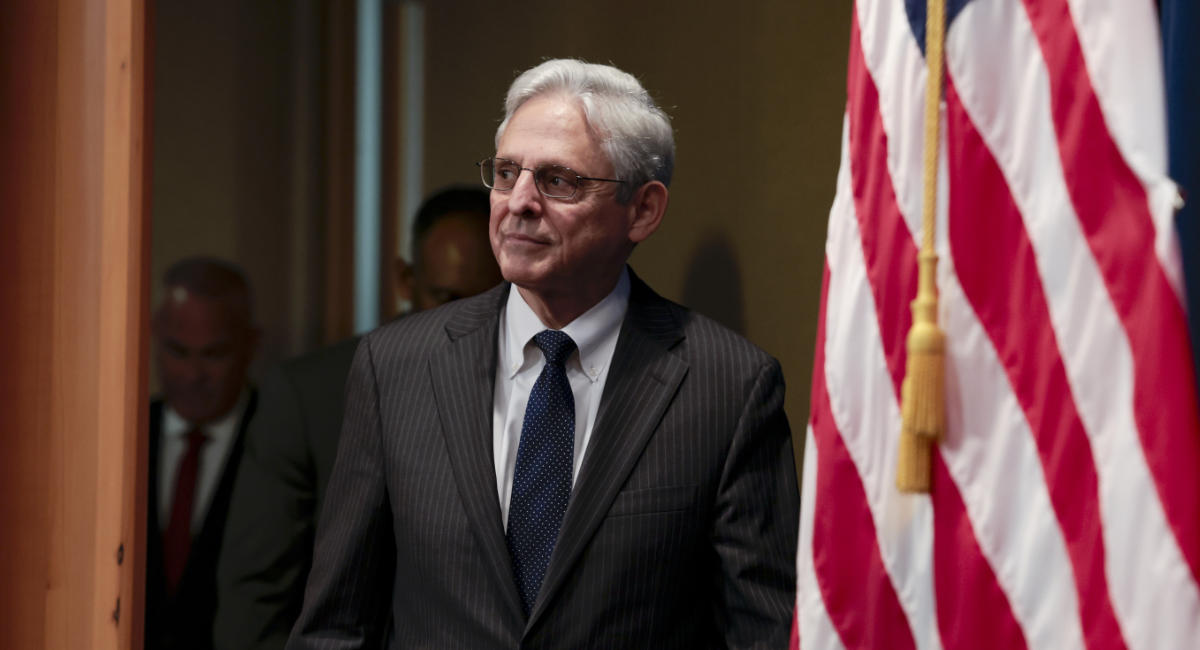 In light of recent acts of pro-abortion terrorism against pro-life centers, dozens of faith leaders and pro-life groups have joined CatholicVote in sending an urgent letter to U.S. Attorney General Merrick Garland and Assistant Attorney General Clarke demanding action. In what has been described as “rage and revolution,” pro-abortion violence has escalated since the release of the leaked draft opinion the Dobbs v. Jackson Women’s Health Organization case suggesting the possible overturn of Roe v. Wade.

From that point to today, Live Action News has documented multiple acts of arson, vandalism, disruptions, threats, incitements (and even one assassination attempt so far) committed by pro-abortion extremists against pro-lifers. 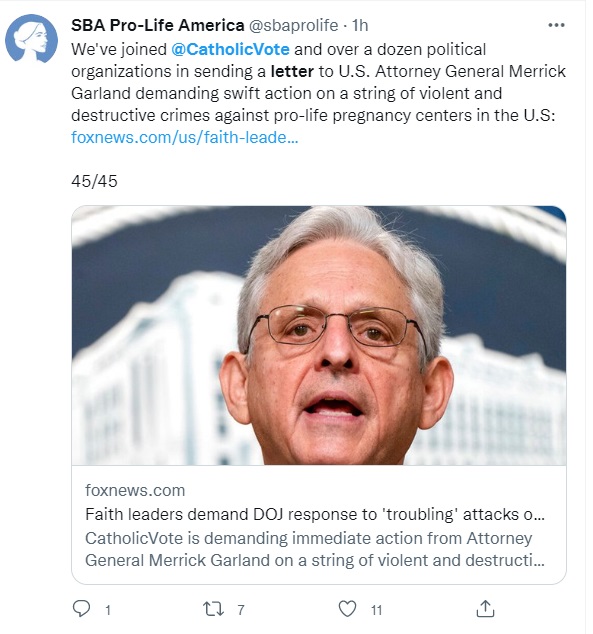 The anonymous pro-abortion domestic terrorist group Jane’s Revenge has published multiple communiques through anarchist intermediaries, taking credit for serious acts of violence, including arson, while threatening to escalate attacks in coming days. The group’s June 14th manifesto has called on pro-abortion terrorist allies to “paint, to burn, to cut” in retaliation against groups who do pro-life work. In addition, seemingly less extreme pro-abortion groups like RuthSentUs or RiseUp4AbortionRights appear to be behind protests outside the homes of Supreme Court Justices as well as disruptions at churches, malls, and other public gatherings.

“We, the undersigned representing millions of Americans, are writing to voice our concerns over the increased attacks against churches, pregnancy resource centers and pro-life organizations in the aftermath of the leaked draft opinion in the Supreme Court case Dobbs v. Jackson Women’s Health Organization,” the letter begins. “In December of last year, the Department of Justice was asked how it was investigating the repeated attacks on churches in the United States. The Attorney General was also asked to investigate those complaints and take appropriate action as is your duty. Since that request there has been public silence.”

“Since the May 3 leak of the draft opinion in Dobbs, those attacks have intensified. Two pro-life organizations in Madison, Wisconsin and Keizer, Oregon have been firebombed as well as a pregnancy care center in Buffalo, New York. Seventeen churches or pro-life organizations have been vandalized with pro-abortion or anti-religious slogans. Among those, a tiny Black Baptist church in rural Mississippi was spray-painted with depictions of rape, and four churches in Olympia, Washington were vandalized on the same day with phrases like ‘abort the church.’ A recurring slogan has been: ‘If abortions aren’t safe, then neither are you,'” the letter adds.

“The relative silence from the Administration endangers Americans even more,” the letter reads. “One extremist group is advocating for violence in response to the final Supreme Court decision on Dobbs, while another group has published home addresses, and encouraged people to show up at Supreme Court Justices’ homes, churches, and their children’s schools in an attempt to coerce the Justices and influence their final decision. Last week, there was an attempted assassination of a sitting Supreme Court Justice at his home.” 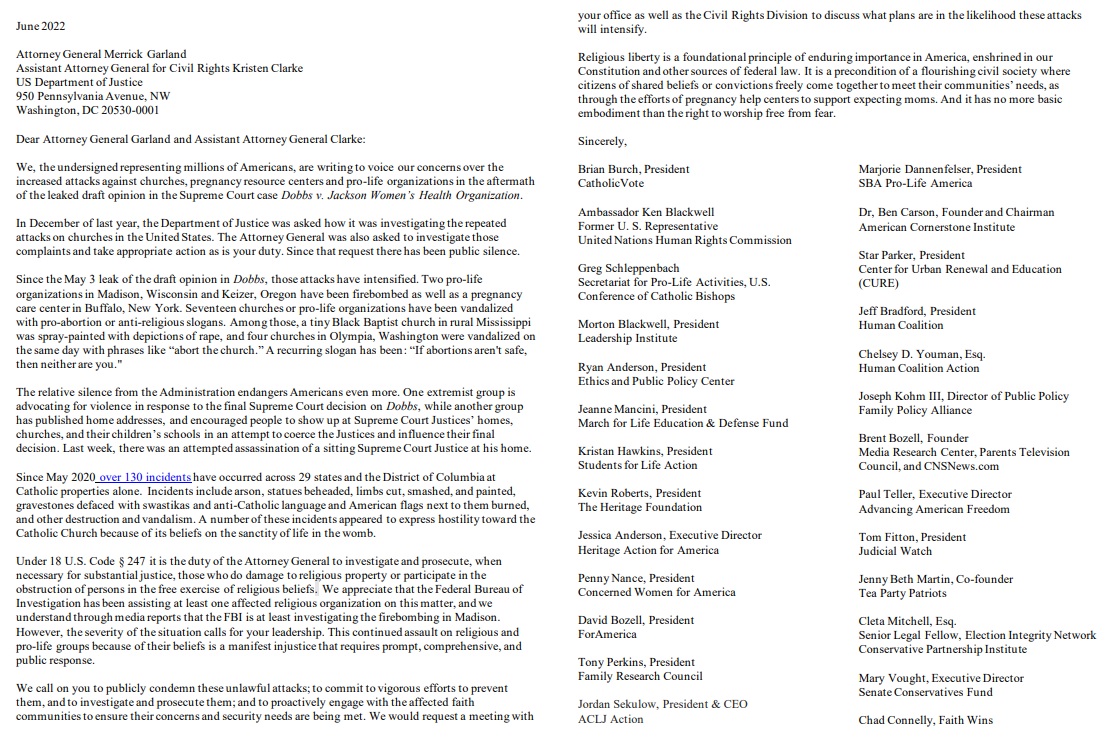 According to the letter, “over 130 incidents have occurred across 29 states and the District of Columbia at Catholic properties alone” since May 2020. The signers believe many of the incidents were motivated by religious bigotry.

“Under 18 U.S. Code § 247 it is the duty of the Attorney General to investigate and prosecute, when necessary for substantial justice, those who do damage to religious property or participate in the obstruction of persons in the free exercise of religious beliefs,” the signers point out.

The letter follows a separate request by 16 United States Senators who asked the AG and DOJ to respond to the increasing incidents of pro-abortion violence. Additional Congressional leaders calling for the administration to take action on pro-abortion violence were provided to Live Action News by Susan B. Anthony Pro-Life America (SBA), which recently published a report detailing the violence. These include a resolution introduced by 40 Republican members of Congress led by House Republican Conference Vice Chairman Mike Johnson (LA-04), a letter to Attorney General Garland from U.S. Senator Josh Hawley (R-Mo.), and a letter to Attorney General Garland from U.S. Senator Marco Rubio (R-Fla.).

On June 21, 2022, Ohio Attorney General Dave Yost along with 18 other AGs from various states also sent a letter to urge Garland to take swift action in response to recent terrorist acts against anti-abortion organizations, calling the lack of action intolerable, politically motivated, and in violation of his oath of office.

“The Department of Justice must investigate and prosecute these terroristic threats and acts. It should start with Jane’s Revenge—the FBI has more than enough resources to determine the organization’s members and to track down those carrying out these acts of violence, which qualify as terrorism under federal law. And while Jane’s Revenge offers an obvious starting point, the supply of entities deserving to be investigated hardly stops there. Inaction is intolerable in our nation of laws, and it violates your oath of office. Yet, in recent weeks, you have continued to allow illegal actions seemingly because they advance (in the minds of some) the pro-abortion cause, ” the letter reads in part.

The letter notes the federal government’s duty to protect its citizens against violence “does not turn on the victim’s identity” and that “access to justice cannot turn on partisan affiliation,” and calls on the Department of Justice to vigorously investigate and prosecute these illegal acts. Read the full letter here.

In addition, 120 House colleagues sent a June 15 letter to Attorney General Garland, which says, “The department has a clear duty to pursue these recent attacks as instances of domestic terrorism, and it is the responsibility of the National Security Division to protect the United States from threats to our national security by seeking justice through law.”

The letter goes on to point to a Department of Homeland Security (DHS) alert anticipating further violence: ” With this warning made clear, the Department of Justice must act swiftly to investigate and prosecute recent domestic terrorist attacks against pro-life organizations and dissuade future perpetrators of such violence. These attacks have the intended effect of chilling the free exercise of religion and speech, undermining the constitutional rights of Americans.”

Pelosi is pressed on whether Democrat rhetoric is fueling attacks on crisis pregnancy centers.

She refuses to condemn attacks – and says "politicizing all of this is uniquely American."

(That's because the rest of the civilized world has more sensible abortion laws than ours.) pic.twitter.com/i0BCJnX4Zt

The over two dozen faith leaders have requested that the AG “publicly condemn these unlawful attacks; to commit to vigorous efforts to prevent them, and to investigate and prosecute them; and to proactively engage with the affected faith communities to ensure their concerns and security needs are being met.” In addition, the signers of the letter are also requesting a meeting with the AG’s office as well as the Civil Rights Division, “to discuss what plans are in the likelihood these attacks will intensify.”

“Religious liberty is a foundational principle of enduring importance in America, enshrined in our Constitution and other sources of federal law. It is a precondition of a flourishing civil society where citizens of shared beliefs or convictions freely come together to meet their communities’ needs, as through the efforts of pregnancy help centers to support expecting moms. And it has no more basic embodiment than the right to worship free from fear,” the letter says in closing.

The pro-life Thomas More Society legal firm previously issued a letter warning some of the more public pro-abortion groups that if they threaten places of worship, there could be “significant legal liability” under the F.A.C.E. federal law. But, to date, Live Action News is not aware of any federal F.A.C.E. charges even being discussed regarding pro-abortion terrorism against PRCs and churches. And while the White House has condemned “violence and destruction of property,” the feeling inside pro-life circles is that this administration is not pushing the issue strongly enough in demanding federal action.

Editor’s Note: This article has been updated since original publication.