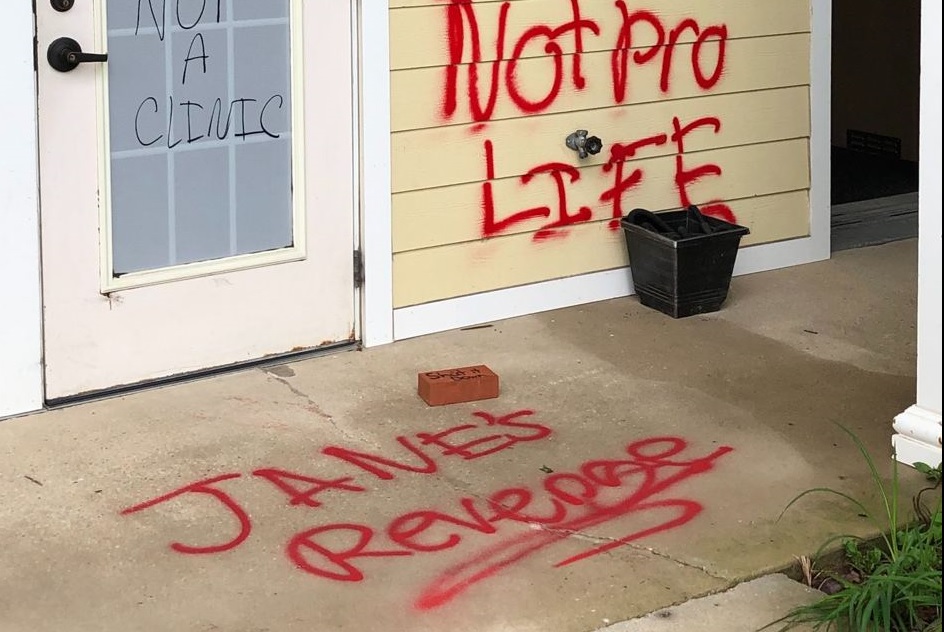 UPDATE, 6/15/22: The Daily Wire reports that the White House has condemned the Jane’s Revenge communique. Reportedly, White House Assistant Press Secretary Alexandra LaManna told DW, “Violence and destruction of property have no place in our country under any circumstances, and the President denounces this,” adding, “We should all agree that actions like this are completely unacceptable regardless of our politics.”

6/14/22: The latest Jane’s Revenge communique is urging the pro-abortion terrorist group’s allies to “paint, to burn, to cut” in retaliation against groups who do pro-life work. The menacing terrorist group which claimed to be “versatile and mercurial” essentially took credit for multiple violent acts of hate, including arson, fire bombing, and vandalism of pro-life centers.

The group described the attacks as “easy and fun” and said they “find joy [and] courage” in committing these acts of terror. The communique also vowed to “never stop, back down, slow down, or retreat” while threatening to “take increasingly drastic measures against oppressive infrastructures” which “may not come in the form of something so easily cleaned up as fire and graffiti.” (emphasis added)

The message comes days after the group’s June 10 deadline expired without incident. It demanded the “disbanding of all anti-choice establishments, fake clinics, and violent anti-choice groups.” That first communique warning was published by Robert Evans on May 10. Text of the latest communique was published by Abolitionist Media Blog on June 14, 2022, which claims to be an “online news source for revolutionary movements” that “intends to be a tool for movements dedicated to anarchist, abolitionist, and revolutionary perspectives.” 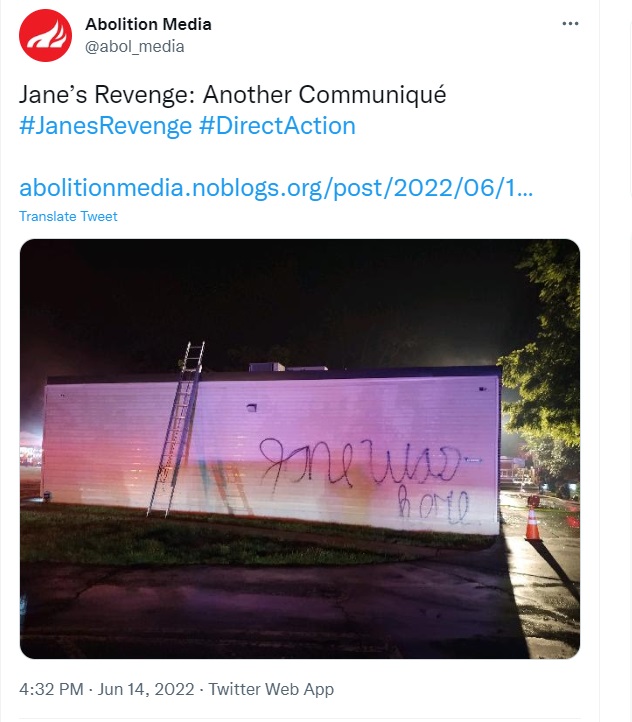 The message has clear errors, mistaking the abbreviation for Maryland as “MA,” and oddly uses the British spelling for other words. The warning also includes a false description of pro-life pregnancy resource centers (PRCs), without naming them as such, by claiming they “impersonate healthcare providers in order to harm the vulnerable.” In truth PRCs offer free services for women to protect vulnerable women and children from violent abortion.

“You have seen that we are real, and that we are not merely pushing empty words. As we said: we are not one group but many. You have seen us in Madison WI, Ft. Collins CO, Reisertown MA, Olympia WA, Des Moines IA, Lynwood WA, Washington DC, Ashville NC, Buffalo NY, Hollywood FL, Vancouver WA, Frederick MA, Denton TX, Gresham OR, Eugene OR, Portland OR, among others, and we work in countless locations invisibly. You’ve read the communiqués from the various cells, you’ve seen the proliferating messages in graffiti and elsewhere, and you know that we are serious,” the alleged Jane’s Revenge communique begins.

A state-by-state list of attacks has been published at Live Action News here.

“We were unsurprised to see thirty days come and thirty days pass with no sign of consilience or even bare-minimum self-reflection from you who impersonate healthcare providers in order to harm the vulnerable,” the communique states. “History may not repeat itself, but it certainly rhymes, and we’ve already seen such stanzas where medical autonomy is stripped away, humanity is increasingly criminalized, and merely surviving becomes largely untenable.”

The domestic terrorist group then deepens the threat, claiming the deadline was “yesterday,” June 13, which indicates that the Abolitionist Media Blog either delayed publishing the message or it was previously published on a different website:

Your thirty days expired yesterday. We offered an honourable way out. You could have walked away. Now the leash is off. And we will make it as hard as possible for your campaign of oppression to continue. We have demonstrated in the past month how easy and fun it is to attack. We are versatile, we are mercurial, and we answer to no one but ourselves. We promised to take increasingly drastic measures against oppressive infrastructures. Rest assured that we will, and those measures may not come in the form of something so easily cleaned up as fire and graffiti [emphasis added].

Sometimes you will see what we do, and you will know that it is us. Sometimes you will think you merely are unlucky, because you cannot see the ways which we interfere in your affairs. But your pointless attempts to control others, and make life more difficult, will not be met passively. Eventually your insurance companies, and your financial backers will realize you are a bad investment..

From here forward, any anti-choice group who closes their doors, and stops operating will no longer be a target. But until you do, it’s open season, and we know where your operations are. The infrastructure of the enslavers will not survive. We will never stop, back down, slow down, or retreat.

We did not want this; but it is upon us, and so we must deal with it proportionally. We exist in confluence and solidarity with all others in the struggle for complete liberation. Our recourse now is to defend ourselves and to build robust, caring communities of mutual aid, so that we may heal ourselves without the need of the medical industry or any other intermediary. Through attacking, we find joy, courage, and strip the veneer of impenetrability held by these violent institutions [emphasis added].

The communique then sends a message to others who would participate in violence: “And for the allies of ours who doubt the authenticity of the communiqués and actions: there is a way you can get irrefutable proof that these actions are real. Go do one of your own. You are already one of us. Everyone with the urge to paint, to burn, to cut, to jam: now is the time. Go forth and manifest the things you wish to see. Stay safe, and practice your cursive.”