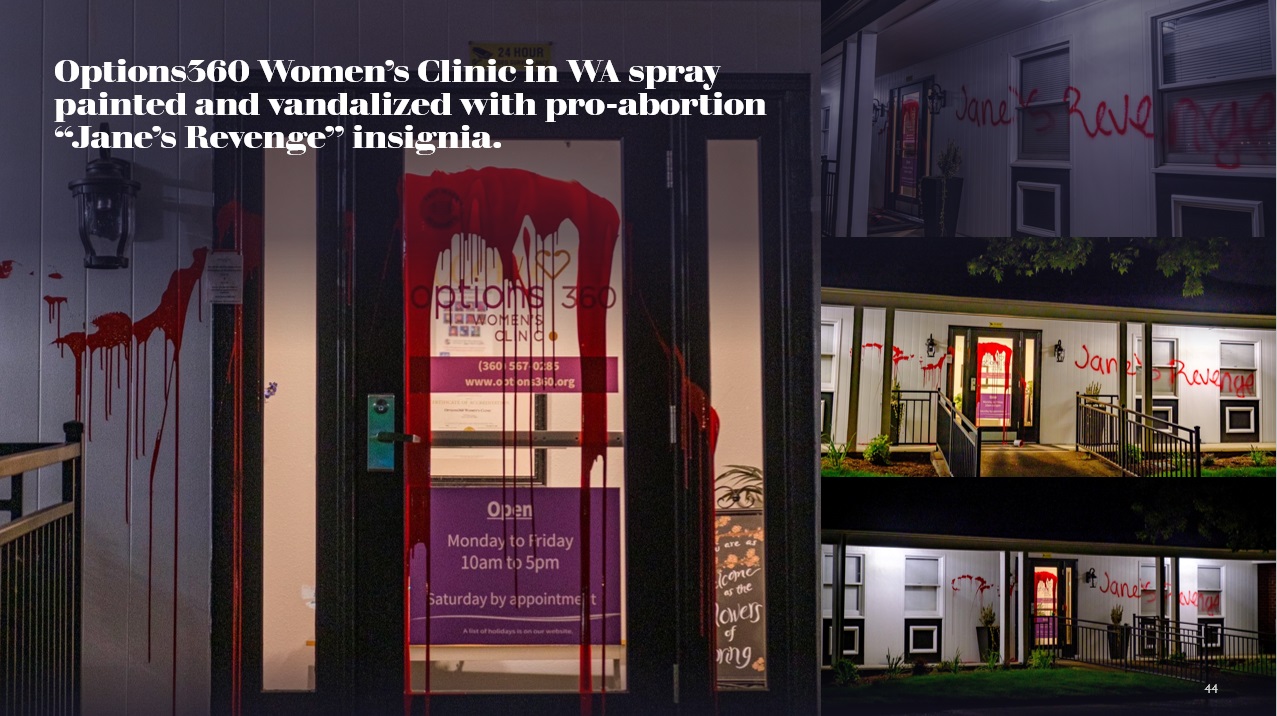 The Department of Homeland Security (DHS) has issued a new alert warning of potential violence to religious and minority institutions — but failed to mention specific terroristic threats published by pro-abortion group Jane’s Revenge, whose June 10 deadline threatens more violence is soon to come against pro-life groups.

In past weeks, pro-abortion groups have committed three acts of arson, an attempted assassination on Justice Brett Kavanaugh, and multiple threats and acts of vandalism. These acts follow the leaked Supreme Court draft opinion in the Dobbs v. Jackson Women’s Health Organization case, which appears to overturn Roe v. Wade. The Court’s final decision, however, has not yet been released and could change.

The DHS bulletin released on June 7 claims the nation is in a “heightened threat environment.” It states:

In the coming months, we expect the threat environment to become more dynamic as several high-profile events could be exploited to justify acts of violence against a range of possible targets. These targets could include public gatherings, faith-based institutions, schools, racial and religious minorities, government facilities and personnel, U.S. critical infrastructure, the media, and perceived ideological opponents. Threat actors have recently mobilized to violence due to factors such as personal grievances, reactions to current events, and adherence to violent extremist ideologies, including racially or ethnically motivated or anti-government/anti-authority violent extremism.

The alert does not name pro-abortion groups that are disrupting churches and threatening violence.

The bulletin goes on to state:

Given a high-profile U.S. Supreme Court case about abortion rights, individuals who advocate both for and against abortion have, on public forums, encouraged violence, including against government, religious, and reproductive healthcare personnel and facilities, as well as those with opposing ideologies…

We continue to assess that the primary threat of mass casualty violence in the United States stems from lone offenders and small groups motivated by a range of ideological beliefs and/or personal grievances.

The June 7 alert follows a previously issued memorandum from May 13, “Potential for Threats to Public Safety in Response to Abortion Debate,” which acknowledged threats directed toward some Supreme Court Justices. “The volume of violent threats targeting Supreme Court Justices, members of Congress, other public officials, clergy, healthcare officials and providers, and others associated with the abortion debate are likely to persist and may increase leading up to and following the issuing of the Court’s official ruling,” the memorandum states.

Images of the attack were posted June 9 on the Twitter page of an abortion supporter who goes by the handle @AlissaAzar, and was shared by journalist Andy Ngô, who tweeted: “Vancouver, WA.: Around June 9, Options360 Women’s Clinic was attacked by far-left group, Jane’s Revenge. Those in the comments of the Antifa member who posted this expressed support for the attack. Alissa Azar herself is facing a felony case for violence.” He then uploaded an image of the alleged indictment against Azar. 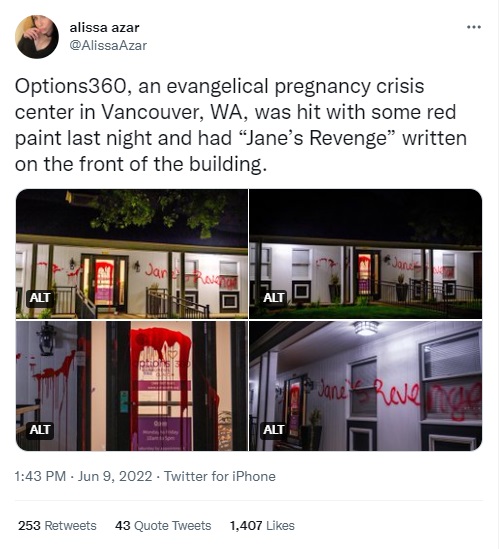 Live Action News confirmed the act of vandalism with the Vancouver Police Department. A VPD spokesperson stated that a paint can was left behind and was collected for evidence. Because of the property damage, the incident does qualify as for a “religious mischief” charge, which could bring both state and Federal F.A.C.E. charges. The Thomas More Society, a legal group, previously issued a letter warning pro-abortion groups that if they threaten a place of worship, there could be “significant legal liability” under the F.A.C.E. federal law.

Jane’s Revenge published its first communique on May 10, vowing to “adopt increasingly extreme tactics to maintain freedom over our own bodies” while demanding the “disbanding of all anti-choice establishments, fake clinics, and violent anti-choice groups” by June 10.

The group’s next communique instructed followers to carry out a “Night of Rage” as soon as the Supreme Court releases the opinion in the Dobbs case.

Violence against pro-life facilities in Washington has seen an uptick in recent days.

Earlier in the week, someone plastered posters on the Care Net Puget Sound offices in Federal Way, claiming the facility wants to “push forced birth options.” Next Step Pregnancy Center in Lynnwood was vandalized on May 25 with the threat, “If abortion isn’t safe, you aren’t either.” On May 22, an alleged “cell” of the Jane’s Revenge terrorist group claimed responsibility for the vandalism of four churches in Olympia. Their message was signed, “Jane’s Revenge Bo Brown Memorial Cell.” Earlier in May, pro-abortion activists lay on the steps of St. James Cathedral in Seattle with fake blood.

In addition, AlaskaWatchman.com reports that the Community Pregnancy Center in Anchorage, Alaska, was “vandalized last week with graffiti, a broken front door and nails” in the early morning hours of June 2. Vandals allegedly spray painted a graffiti message reading, “We will not go back.” According to the report, “A security camera from a nearby neighbor caught some information, showing that the perpetrator entered the clinic property between 1:30 and 2 a.m.”

This week, another communique, alleged to be from Jane’s Revenge, has taken credit for hate crimes against pro-life groups — this time, the vandalism of an Iowa pro-life pregnancy center.

The cryptic message published by the Twitter handle @dsmstreetmedics claims the communique was obtained “from a trusted source,” adding that “we are in no way affiliated with these actions, but we applaud them.” Jane’s Revenge allegedly asked to use the platform of @dsmstreetmedics. In their message, the group inexplicably accuses pregnancy resource centers of “inflict[ing] emotional, financial, and physical violence on people who need healthcare support” and claims the centers “work to uphold patriarchy, [C]hristian supremacy, white supremacy, and cisheteronormativity.”

They state that their acts of vandalism were “fun and easy.”

Live Action News has not yet fully confirmed the vandalism, and therefore, we have redacted all names:

We broke windows and wrote messages of ‘god loves abortion,’ ‘fake clinic’, ‘this is not a safe place’, and ‘stop lying’. It was fun and easy. Now is the time for action. Crisis pregnancy centers as well as the banks, businesses, and churches that support them 3/are all responsible for the violence of forced birth. We are not asking for the right to choose. Abortions are not safe and neither are you. In solidarity, love, & rage, Jane’s Revenge” /end. 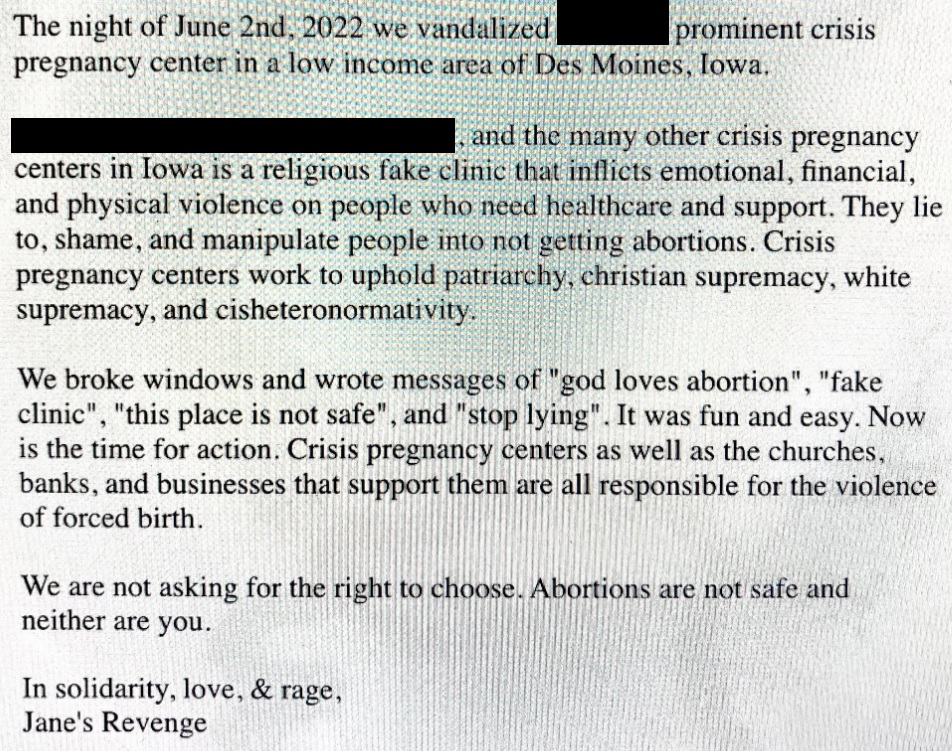 Live Action News contacted the Des Moines Police Department which said their records department did not yet have a reported incident on file reported for the center’s address. Live Action News reached out to all three centers mentioned in the alert, and so far no one has been willing to confirm or detail what — if anything — took place.

Nationally, pro-abortion violence has escalated to include multiple acts of arson, threats, vandalism and even an attempted assignation of Supreme Court Justice Brett Kavanaugh. Police arrested Nicholas John Roske, who traveled to Maryland with the specific goal of killing Supreme Court Justice Brett Kavanaugh. According to LegalInsurrection.com, the official complaint against Roske read documented that his pro-abortion views were part of his motivation: “ROSKE indicated that he understood his rights, agreed to speak with the agents, and signed a written waiver to that effect. ROSKE then told the detective that he was upset about the leak of a recent Supreme Court draft decision regarding the right to abortion as well as the recent school shooting in Uvalde, Texas.”

The rash of pro-abortion violence follows a Supreme Court leaked draft opinion in the Dobbs v. Jackson Women’s Health Organization case, indicating the Court may be poised to overturn Roe v. Wade. Activists in support of abortion have since vowed to be “ungovernable,” organize a “summer of rage,” and to initiate “revolution” and “revenge” to maintain the right to kill a baby in the womb for any reason at any point in pregnancy. The increasing violence has prompted 16 United States Senators to send a letter to U.S. Attorney General Merrick Garland asking for the DOJ to respond to increasing pro-abortion violence.