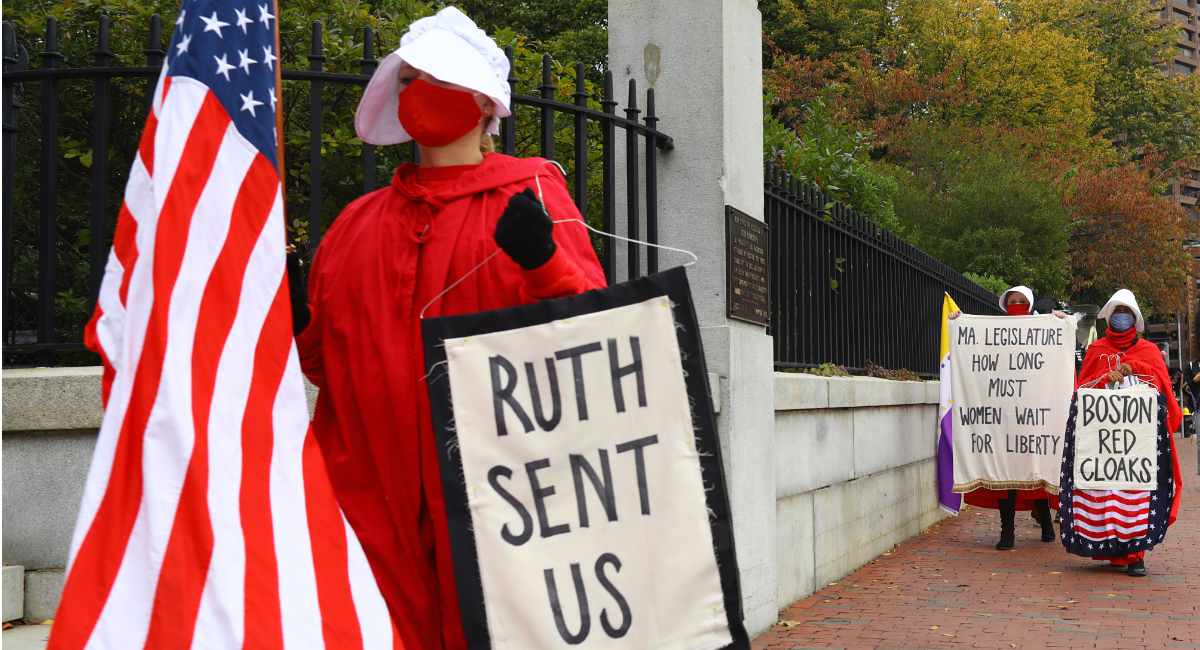 The pro-abortion group RuthSentUs, which recently published the home addresses of Supreme Court justices online, is on the defensive after a California man came to Maryland with weapons, plotting to kill Justice Brett Kavanaugh.

In a recent Twitter thread, RuthSentUs claimed they are not to blame for potentially inspiring the pro-abortion activist to seek to kill Justice Kavanaugh. The group has held regular protests outside the homes of Supreme Court Justices since the leaked draft opinion was published in the Dobbs v. Jackson Women’s Health Organization case that could overturn Roe v. Wade.

In an attempt to distance themselves from the attempted assassination, RuthSentUs wrote on Twitter, “STOP blaming us for disclosing Kavanaugh’s address! Search Twitter: Justice’s name + “address”. They’re all out there, including second homes and summer villas. #OverturnRoe? #NoPeace We did not doxx the Justices. Stop watching @FoxNews!” 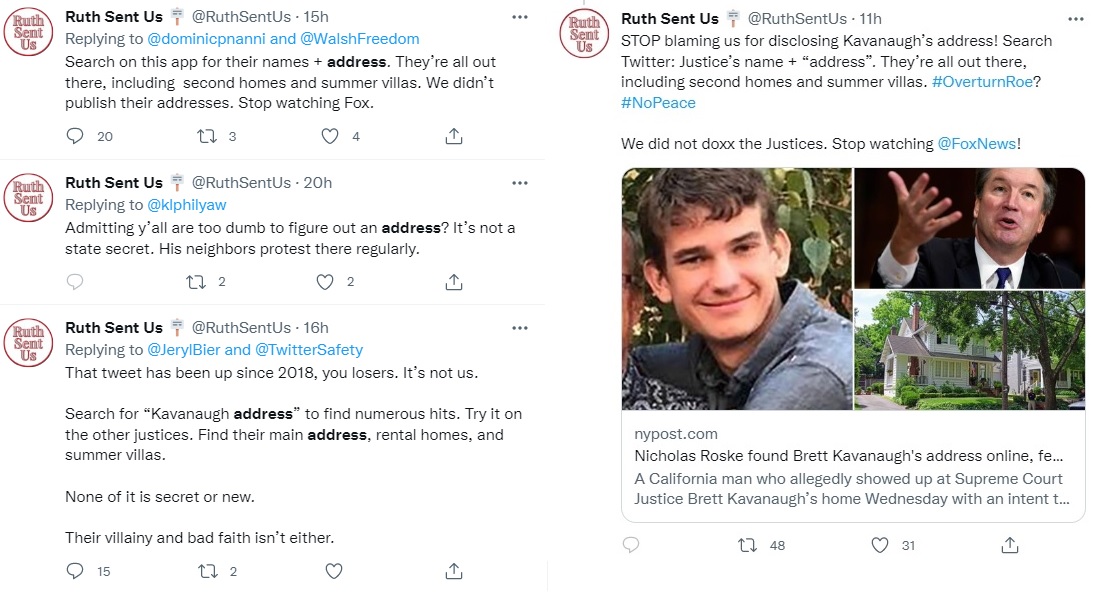 According to LegalInsurrection.com, the official complaint against Roske reads:

After being transported to the Montgomery County Police Department Second District Precinct, a detective advised ROSKE of his constitutional rights. ROSKE indicated that he understood his rights, agreed to speak with the agents, and signed a written waiver to that effect. ROSKE then told the detective that he was upset about the leak of a recent Supreme Court draft decision regarding the right to abortion as well as the recent school shooting in Uvalde, Texas. ROSKE indicated that he believed the Justice that he intended to kill would side with Second Amendment decisions that would loosen gun control laws. ROSKE stated that he began thinking about how to give his life a purpose and decided that he would kill the Supreme Court Justice after finding the Justice’s Montgomery County address on the Internet. ROSKE further indicated that he had purchased the Glock pistol and other items for the purpose of breaking into the Justice’s residence and killing the Justice as well as himself.

While it is unclear where on the internet Roske found the Justice’s address, the image below of the now scrubbed and archived Ruth Sent Us website shows that the RuthSentUs clearly published a map (or meeting location) leading to the Justices homes. 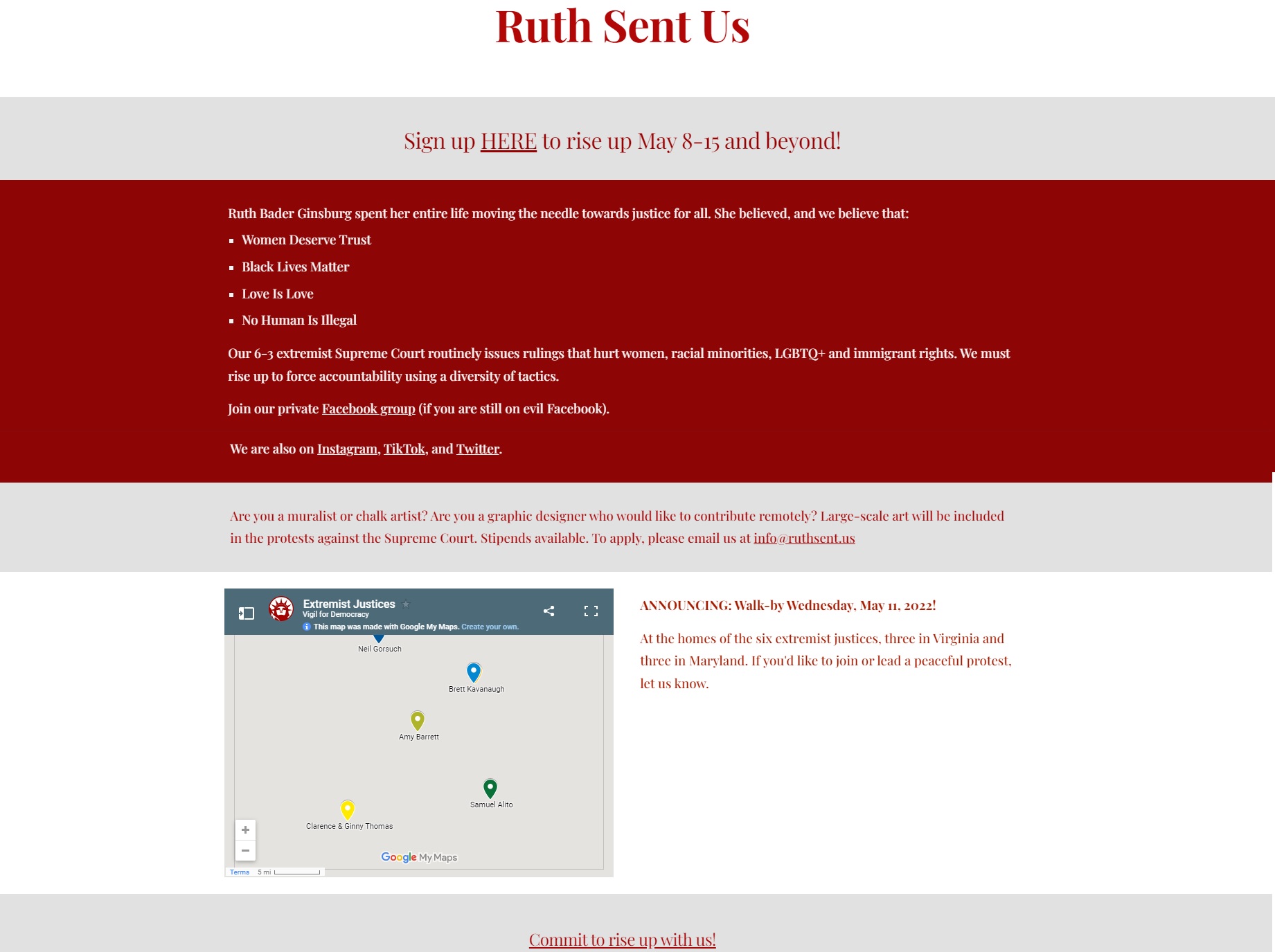 RuthSentUs map to SCOTUS home addresses archived from May 5,2022

RuthSentUs has also claimed that the group is “committed to non-violence,” later tweeting about Roske, “We didn’t send him.”

“Fundamentalists want us to cower in fear of their armed attacks of our homes, schools and clinics,” they added in the same Twitter thread, which included a meme of protest dates at various Justice’s homes. “They expect us to go high when they go low. We refuse. We’re committed to non-violence. Our protests are peaceful and joyful. Protest #SCOTUS6 with @OurRightsDC @downrightimp” the tweet also read.

“We offer our thoughts & prayers to Brett & Ashley Kavanaugh after a California man arrived by taxi near their home, armed with a gun & knife, then called the police on himself to confess his murderous rage against the abusive alcoholic ‘Justice’. We didn’t send him. #RuthSentUs,” the group also tweeted. 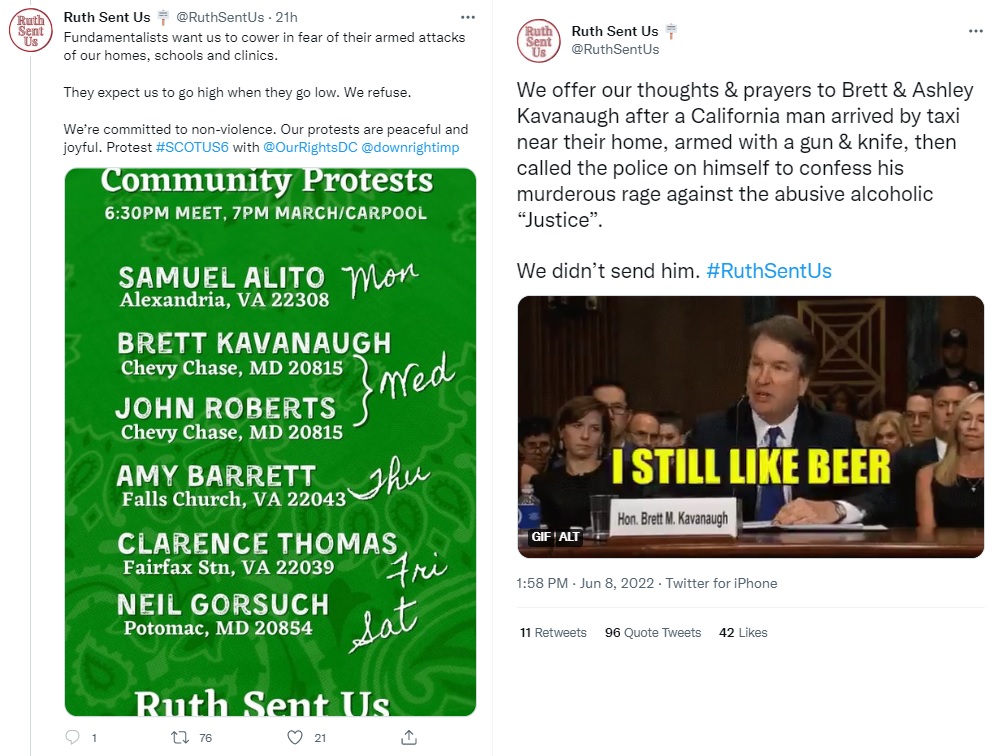 RuthSentUs appears to have been created in 2020 and does not divulge the names of organizers on its website. The group allegedly posted GPS coordinates to the homes of SCOTUS Justices and also threatened to “burn the Eucharist” of Catholic Churches.

In recent weeks, along with the protests, a rash of terroristic acts, including three fire bombings, have been aimed at pro-life pregnancy centers, churches and offices, prompting 16 United States Senators to send a letter to U.S. Attorney General Merrick Garland asking for the DOJ to respond to increasing pro-abortion violence.