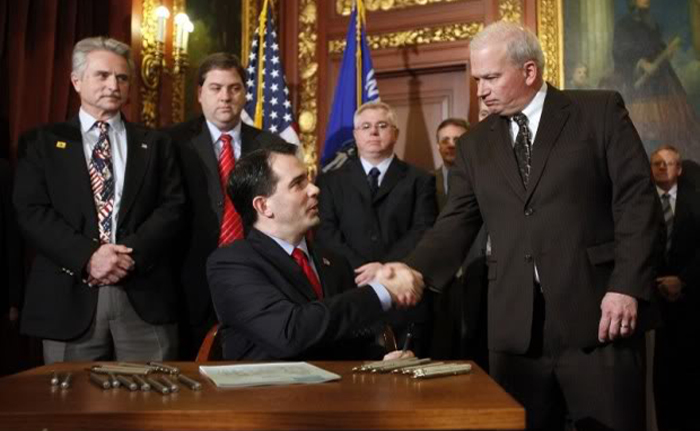 After alarming pro-lifers with a string of abortion missteps, Wisconsin Gov. Scott Walker is making amends by standing by the ultrasound bill he signed in 2013 (and holding firm when detractors tried to lie about his words), and pledging to sign a 20-week abortion ban currently making its way through the state legislature even if it doesn’t contain a rape exception. He’s definitely moving in a pro-life direction, but the latest manufactured controversy shows there’s still some room for improvement.

In expressing support for a state viability bill banning abortions after 20 weeks, including in cases of rape or incest, Walker told reporters this week, “I mean, I think for most people concerned about that, it’s in the initial months when they’re the most concerned about it,” in regard to pregnancies brought about by rape or incest. “In this case, again, it’s an unborn life. It’s an unborn child and that’s why we feel strongly about it.”

“I could not believe that our governor in a few short words showed how deeply out of touch he is with the women of Wisconsin and the women of this country. And, frankly, his policies with regard to women’s reproductive health are actually dangerous,” Baldwin said.

Baldwin is a pro-abortion absolutist who’s voted in total lockstep with Planned Parenthood and NARAL her entire career, including votes to protect sex-selection abortion and take away states’ rights to pass even modest abortion regulations, and whose ideology renders her unable to fathom how women can possibly compete economically without birth control.

And while we know it’s a pseudo-religious belief among pro-aborts that to be female is to be pro-“choice,” actual facts suggest otherwise—while Gallup may show a narrow majority of 54 percent of women identifying as pro-choice, we’ve already seen that the specific policies the majority supports don’t match the label, and many polls over the years have shown majorities of women being pro-life (often more so than men). So who’s out of touch, Senator?

It’s also absurd to equate Walker’s comments with Akin’s “legitimate rape” talk. Akin made a bizarre, obviously false claim about female biology. Walker said nothing of the kind. But it’s not surprising that Baldwin heard a “Todd Akin moment” as soon as he opened his mouth. Heck, she’d probably hear a “Todd Akin moment” if a pro-lifer told her “I like Cheerios.”

That said, Walker still phrased his answer rather badly. He seemed to be getting at the fact that a 20-week ban still leaves rape victims with a five-month window in which to get an abortion, no questions asked, rendering a rape exception pointless at this stage even if you do happen to believe in it. That’s absolutely a valid point, which Tammy Baldwin apparently can’t be bothered to debate.

But instead of that simple, straightforward answer, Walker gave a vague response that can be construed as presuming to get into rape victims’ heads well enough to say what does and doesn’t concern them, without specifically stating the perfectly logical reason why it wouldn’t be a concern. Knowing what he was referring to confirms that he wasn’t trivializing rape, but not speaking clearly makes the idea that he was plausible to low-information voters.

We’ve been talking lately about how pro-life candidates could learn a lot on how to discuss abortion by simply taking notes from those of us who do it for a living. In the interest of ensuring that whenever politicians open their mouths they make the public more receptive to the pro-life view without reinforcing stereotypes, allow me to present the following rules for when and how they should discuss rape in the context of abortion:

1.) Don’t discuss rape at all if your opponent or the media hasn’t already brought it up. Focus instead on reinforcing the personhood of the preborn, the extremism of the opposition, and the fact that abortion’s champions really don’t have women’s best interests at heart. If done effectively, this will spark a deeper contemplation of the issue which will naturally lead people to question their assumptions about the so-called hard cases anyway.

2.) If you’re asked about a late-term ban’s lack of a rape exception, simply stress that it would be pointless in a bill that gives anyone, including rape victims, five (or more) months to get an abortion. Follow that up with an aggressive condemnation of the extremists’ distaste for any abortion restrictions, which are out of step with the 84 percent of Americans who oppose elective abortions past the third month of pregnancy.

3.) If you’re asked whether abortion should be allowed for rape, follow New Jersey Senate candidate Jeff Bell’s example: express sympathy for the horrible experience and difficult dilemma, but note that the flip side of the question is to tell a lot of our fellow Americans who have been conceived in rape that they should be dead right now.

Conclude that the proper solution is to care for both as best as possible without subjecting mother or child to further violence, and to prevent women from having to face the decision in the first place by supporting policies that actually keep rapists away from them…a topic on which your pro-abortion Planned Parenthood-worshiping opponent is likely to be quite vulnerable.

4.) Under no circumstances should you discuss (a) whether rape is more or less likely to result in pregnancy than consensual sex, (b) what percentage of rape claims you think are false, or (c) whether any given conception means a rape was part of God’s will. And unless you were actually raped, never presume to pontificate on what you would feel or be concerned about in a rape victim’s shoes. No exceptions.

We’re all sick of the way it seems like barely a week can go by without a new attempt to tie any and every pro-lifer to Todd Akin’s infamous blunder. But while pro-lifers’ remarks are rarely the second coming Baldwin and her press boosters make them out to be, the wakeup call still applies. On this facet of the abortion debate, there is little margin for error.