Irin Carmon of Salon wrote an article on June 27 entitled, “It’s a Wendy Davis nation, now.” Carmon details what happened in Texas during the recent special session when the Senate was unable to complete a vote on the proposed pro-life law.

Carmon waxes eloquent on the fight put up by abortion supporters in their orange shirts. She speaks of their use of social media, how they’ve supposedly pushed abortion rights to the forefront of the Democrat Party in Texas, and how the potential future of Texas was seen on the night of the vote.

Cecile Richards — president of Planned Parenthood and daughter of legendary Texas Gov. Ann Richards — was there, shouting too.  ‘My mother would have said, I hear America singing,’ Richards told Salon after leaving the Capitol. ‘It was literally an explosion of participatory democracy that I haven’t seen the likes of in Texas in my memory.’

So, the sound of America singing is supposed to be the sound of an unelected crowd screeching, yelling, and creating general chaos? How can that be music to anyone’s ears? And “participatory democracy”? Completely overriding democracy is a more apt description. The people of Texas elected the members of the legislature to make the laws, not a band of unruly citizens who are in the clear minority.

Her [Davis’s] filibuster was treated as a popular uprising by many in the press, but a Texas Tribune poll found that 62 percent of Texans supported the restriction on late-term abortions.

Of course, there’s also the entertaining phenomenon of what would have been written about in the next day’s papers had a pro-life crowd followed in the selfsame footsteps of Cecile Richards and the other orange shirts. Brad Mattes of the Life Issues Institute describes it well:

[T]here were others inciting the horde. Cecile Richards sent this tweet, ‘Make some noise— louder!’ which was re-tweeted by Planned Parenthood.

Imagine if the tables were turned and a pro-life leader like Father Frank Pavone or myself had sent a tweet like that to our followers. It would have been soundly condemned and the media would’ve painted us as radicals who justify anything for the desired result. We would’ve been castigated for inciting lawlessness.

Underlying the mutual agreement of many Americans that Wendy Davis does not, in fact, speak for us (and neither does Cecile Richards or Planned Parenthood), are numbers. The day after Davis filibustered, the results of a new national poll came out:

Americans favor such a bill by 48 percent to 44 percent. …

[T]he poll, notably, showed that women supported such a measure in greater numbers than men (50 percent of women in favor; 46 percent of men). [Emphasis mine.] 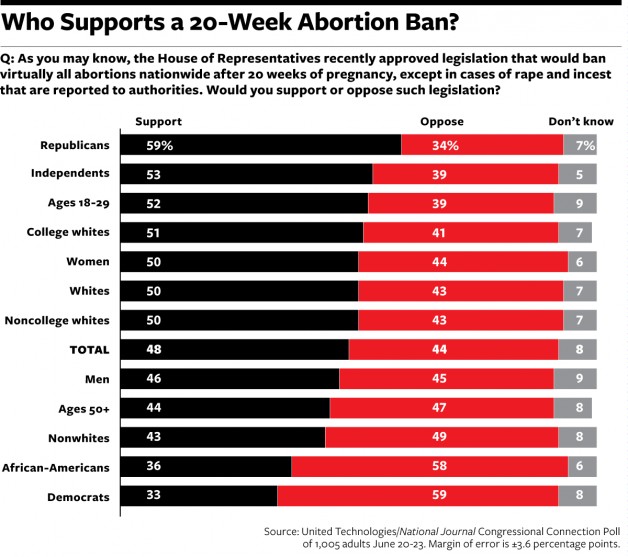 Results of the National Journal poll.

Another part of the poll worth noting is the demographic groups with the second- and third-highest levels of support for a nationwide ban on abortions after 20 weeks, “except in cases of rape and incest that are reported to authorities.” Independents supported such a law at 53%, and young people aged 18-29 supported it at 52%. Both groups are often talked about as important voting blocs that need to be captured. It seems that Wendy Davis is not part of the wave of the future, but instead, she is the one mired in the past.

Sadly, our nation’s recent past includes laws – and failed enforcement of regulations – that lead to the horrific murder of babies who could survive on their own. Our past includes man’s inhumanity to man, in the form of suction abortions, D&Es, and chemical abortions. Our nation’s past is stained with the blood of our children, drenching the coats of doctors and nurses in abortion clinics. Our past calls unborn children, mercilessly killed, “meat in a Crock-Pot” and jokes about them being ripped apart with instruments like pickaxes and drill bits.

But this is not our future. Instead, our future is one of compassion, mercy, humanity, dignity, and life. Governor Rick Perry, in a recent address, captured what we should all be striving for in our nation:

Going forward, we have to match their intensity, but do it with grace and civility and the dignity that our cause deserves.

The louder they scream, the more we know we are getting something done. … So until the day that Roe v. Wade is nothing more than a footnote in our nation’s history books, we will not give up the good fight.