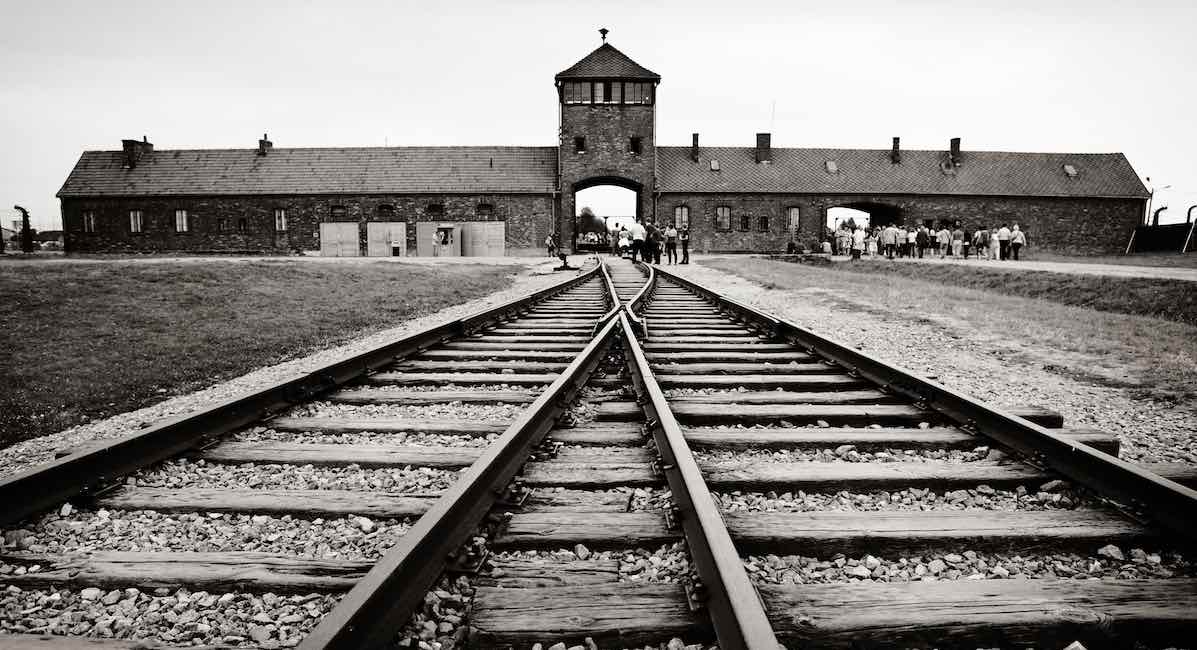 One little known fact about the abortion pill, formerly called RU-486, is that it has ties to the manufacturer of the deadly gas Zyklon-B, used by the Nazis during the Holocaust. Zyklon-B was originally used as a pesticide against rodents and other vermin until the Nazis realized the gas, manufactured by the German chemical company I. G. Farben, could also be used as a way to exterminate large numbers of humans. According to the New York Times, “I.G. Farben played so important a role in Hitler’s war machine and in the Holocaust that it came to be called ”the devil’s chemist.” It manufactured Zyklon B, the gas-chamber poison, among many other products, and its factories exploited more than 35,000 slave laborers, many from Auschwitz. It even built a concentration camp of its own to improve efficiency.” 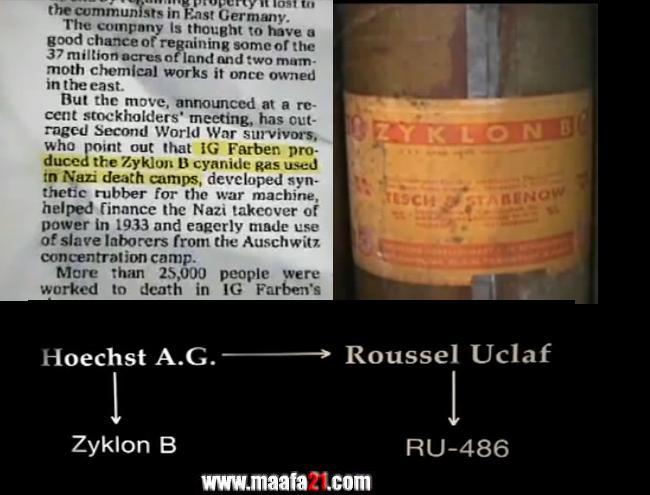 In his book, The Nazi Doctors Medical Killing and the Psychology of Genocide, author Robert J. Lifton notes that the mass killing of Jews began in late 1941 or early 1942, when “[t]he Auschwitz administration had procured Zyklon-B indirectly from the manufacturer, DEGESCH, an acronym for German Corporation for Pest Control. DEGESCH, largely controlled by I.G. Farben, distributed the gas through two other firms….” Lifton writes later in his book, “The use of poison gas… Zyklon-B was the technological achievement permitting ‘humane killing.'” Later, during the Nuremberg trials, it was alleged that Farben had a 42% interest in DEGESCH and board members knew the gas was being used to kill humans. Pharmaceuticals manufactured by Farben and supplied by Farben to the SS were later identified as having been used in grisly Nazi experiments. 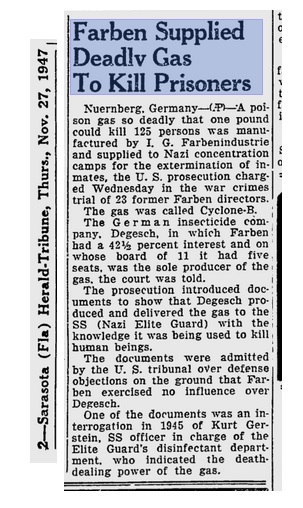 According to the New York Times, research for RU-486 began under the supervision of French researcher Etienne-Emile Baulieu in conjunction with Groupe Roussel Uclaf, the French drug company for which he was a consultant. “The idea was to find a substance that would prevent the uterus from receiving progesterone and thus prevent it from holding onto the fertilized egg,” they wrote. This was accomplished when, in 1980, Roussel-Uclaf had developed RU486.  According to a report by the New York Times, Roussel-Uclaf’s parent company Hoechst A.G. of Germany “was one of three corporations that emerged from the breakup of I.G. Farben, the German chemical company that manufactured the cyanide gas, Zyklon B, for Nazi death camps….”

This clip below (8:40) from the documentary film Maafa21 explains further:

Interestingly, I.G. Farben was a financial partner with John D. Rockefeller and Standard Oil of New Jersey in a company called Standard I.G. Farben…. After the war, I.G. Farben would change its name and become known as Hoechst AG. Today, Hoechst is a gigantic multi-national corporation with subsidiaries all over the world including the United States. Ironically, one of Hoechst’s subsidiaries, Roussel Uclaf, is the French company that developed RU486.  In other words, the same company that produced the gas used in the Nazi death camps also produced the abortion pill that is now being used in American abortion clinics.

RU-486 would eventually be brought into the United States by the Population Council, a non-profit founded by John D. Rockefeller III in 1952, along with others already entrenched in the eugenics movement, as Live Action News previously documented. 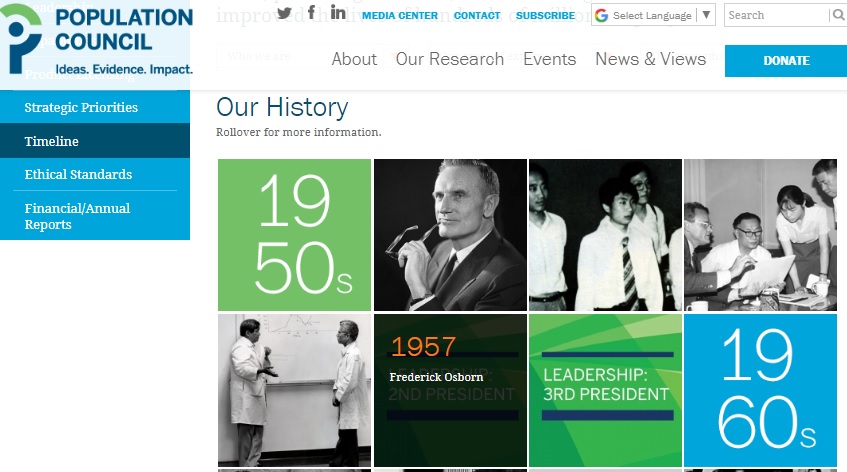 Fears of boycotts against Roussel Uclaf caused the corporation’s leaders to refuse to sell RU-486 within the U.S. “Privately, Roussel officials said colleagues at Hoechst were dismayed by the right-to-lifers’ taunts that Hoechst and Roussel were doing to fetuses what the Nazis had done to the Jews. I.G. Farben, Hoechst’s ancestor company, manufactured cyanide gas for the death camps,” the NY Times wrote in 1989. In addition, a prohibition of the drug was put in place under the Reagan and Bush administrations.

But, in 1993, newly elected President Bill Clinton signed an executive order directing the FDA to expedite marketing of the pill. And by 1994, with the encouragement of the Clinton administration, Roussel-Uclaf assigned the US rights of marketing and distribution of RU-486 over to the Population Council. The right to distribute the drugs was later handed over to DANCO Laboratories, a sub-licensee of the Population Council. In 1996, the David and Lucile Packard Foundation seeded DANCO with $14.2 million in program-related investments, to help keep DANCO afloat when it “ran short on funds.” Packard would go on to fund Gynuity Health Projects, currently conducting abortion pill clinical trials, as well as a number of studies, to expand the drug further.

It was later revealed that Hua Lian Pharmaceutical, a company owned by the Chinese government agreed to manufacture the drug for the U.S. market. The abortion pill was “an integral part of China’s one-child policy since the drug was introduced on a wide scale here in the early 1990’s,” according to the New York Times. In 2002, the Washington Post, reported, “The Rockefeller Foundation gave $2 million to the group in 1997 to help Hua Lian and China’s state family planning agency upgrade the factory.”

A 2002 report by the LA Times noted how abortion philanthropists Open Society Institute, the philanthropic arm of billionaire George Soros, and the California-based Kaiser Family Foundation also helped finance DANCO. Internal documents reviewed by the Wall Street Journal indicate that Warren Buffett and others helped with financing and according to a 2000 Washington Post report, “The Buffett Foundation… made at least $2 million in interest-free loans to the Population Council… according to tax documents filed in 1995. That money was in turn used to conduct clinical trials of RU-486.”

Live Action News has documented that studies which claim that the off-label dispensing of the abortion pills is safe are often funded by these same investors of DANCO — many of which fail to reveal these conflicts of interest.