Since the COVID-19 pandemic began, Planned Parenthood has been able to obtain tens of millions of dollars in relief funds, despite being ineligible for funding. Now, the Paycheck Protection Program (PPP) has officially run out of money — but not before Planned Parenthood received millions more in taxpayer handouts.

Concerned Women for America discovered that Planned Parenthood of Greater New York (PPGNY) received $10 million from the Biden-Harris administration through a PPP loan. “Biden’s @SBAgov closed the Paycheck Protection Program yesterday for running out of $$ – but not before $10 Million went to Planned Parenthood NY,” the group tweeted. “One wonders how many businesses could have stayed open instead with that cash.”

🚨 BREAKING NEWS: Biden Admin just gave Planned Parenthood of Greater NY $10 MILLION in a single loan through the Paycheck Protection Program. Your tax $$ propping up @PPGNYACT is nothing short of scandal.

“By our count, Planned Parenthood has slithered its way to obtain more than $85 million dollars in corona virus relief loans through the Paycheck Protection Program guaranteed by the American people. Despite congressional regulations that were intended to disqualify them, Big Abortion has found a way to make the American people complicit in their nefarious dealings,” Penny Nance, president and CEO of Concerned Women for America, said in a statement to Live Action News. “Its latest move came through its Planned Parenthood of Greater New York affiliate who got a $10 million loan approved just days before the program ran out of money. This from a company which reported a record number of abortions in its last report, where they announced they made $69.7 million in profits. This is obscene by any reasonable measure and Congress should demand an immediate investigation.”

READ: A look back at 2020: Racism and white supremacy exposed within abortion industry

As the Susan B. Anthony List pointed out, Planned Parenthood is hardly desperate for funding: 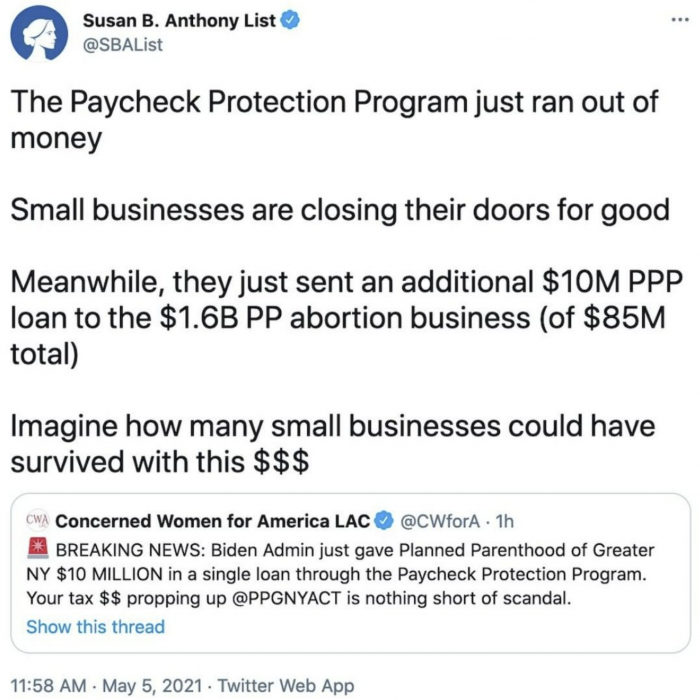 Numerous other Planned Parenthood affiliates have received PPP loans throughout the pandemic, but PPGNY has been plagued with scandals, so its receipt of government loans is especially galling. PPGNY has been struggling financially since being formed in 2019, laying off staff and making budget cuts, seemingly due to a drop in the number of abortions it was committing — the affiliate’s main source of revenue.

The crown jewel of PPGNY is now called the Manhattan Health Center, after leadership chose to remove founder Margaret Sanger’s name from the facility for her racist, eugenicist beliefs and actions. CEO Laura McQuade was also fired after employees accused her of racist and abusive behavior, as well as accusations that she mishandled funds and took the facility from an $18 million surplus to a $6 million deficit.

Meanwhile, the facility is known to have injured at least 37 women, with four known emergencies in 2020, and at least 13 ambulance calls in 2019, when five women were injured in just seven weeks. The building itself has safety concerns, including an elevator too small for paramedics to fit a stretcher into, which could cause life-threatening delays in getting a patient to an ambulance in an emergency situation.

Given its history of Medicaid fraud, abetting of sex traffickers and abusers, and other scandals, Planned Parenthood should not be receiving any government funding, but PPGNY’s receipt of loans from the COVID-19 relief program is especially unjust, considering countless small businesses will be forced to go without — all in the name of propping up America’s largest abortion chain.