Do women who take the abortion pill and then decide to continue the pregnancy have an increased risk of fetal anomalies? Abortion advocates claim that they do. But is this true? The pro-abortion American College of Obstetricians and Gynecology (ACOG) has claimed, “Continuing the pregnancy is not recommended because the drugs used for medical abortion are known to cause severe birth defects.” But in a 2014 Practice Bulletin, ACOG admitted, “No evidence exists to date of a teratogenic [birth defect] effect of mifepristone,” which is the first of the two-pill regimen. The abortion pill regimen consists of two pills: Mifepristone (Mifeprex) and Misoprostol. The abortion pill reversal protocol is done after the first medication, mifepristone, is given.

According to testimony from the inventor of the abortion pill reversal method, the profitable abortion industry has used the scare tactic of birth defects to pressure women into going ahead to continue their pregnancies. Dr. George Delgado, M.D. told a state House committee, “Several women have told our hotline nurses that when they changed their minds and called their respective abortion centers inquiring about reversal, they were erroneously told that there is ‘no possibility of reversal’ or that ‘your baby is sure to have birth defects…'” 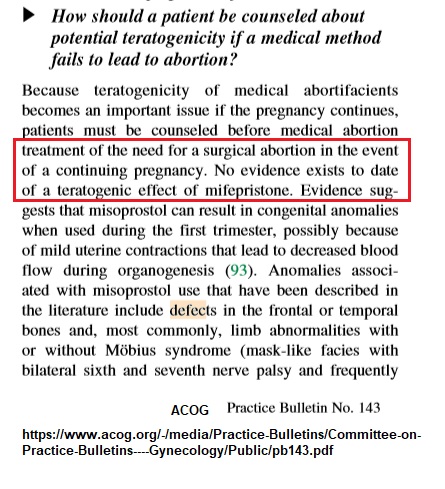 In 2017, ACOG again wrote, “mifepristone is not known to cause birth defects….” 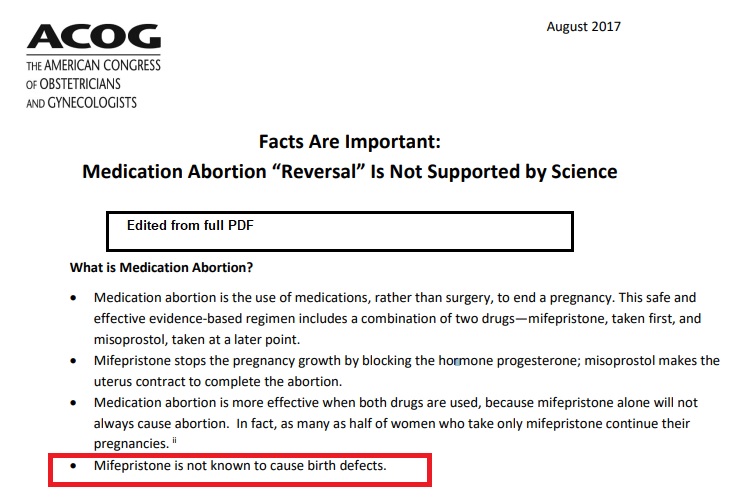 In addition, the pro-abortion organization Women on Web (WOW) — whose founder has been issued a warning letter from the FDA to cease illegally dispensing the abortion pill — confirms on its website, “Research suggests that a fetus that has been exposed to Mifepristone alone and is not aborted will continue to develop normally.”

And, despite the risk from Misoprostol the second pill in the regimen, WOW claims it is “very small,” writing in part, “Exposure of fetuses to Misoprostol can lead to malformations… However, risk of having a baby with malformations after using Misoprostol is still very small and hardly measurable.”

Live Action News has previously documented how WOW advises women experiencing complications from illegally obtained abortion pills to go to the ER and claim they are having a miscarriage. 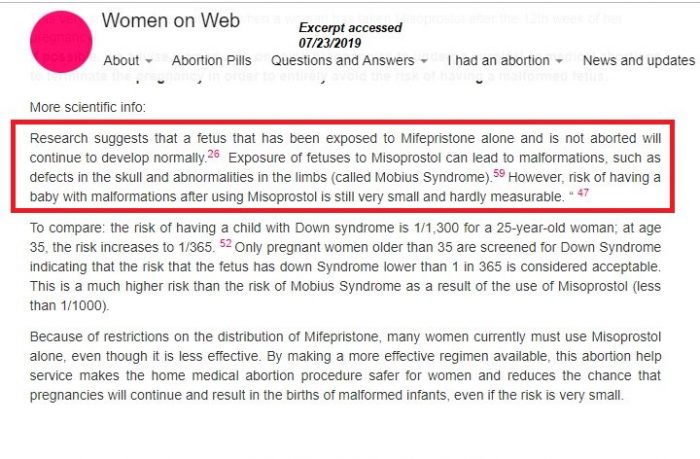 Early research conducted at the time the abortion pill was introduced appeared to indicate the data did not conclusively prove an increased risk of birth defects from a continued pregnancy after taking the abortion pill, and especially if the woman only took the first pill (Mifeprex/Mifepristone) of the pill regimen. Live Action News has provided a timeline of evidence below.

In 1994, with the encouragement of the Clinton administration, French pharmaceutical manufacturer Roussel-Uclaf assigned the US rights of marketing and distribution of abortion pill RU-486 to the Population Council. The right to distribute the drugs were later handed over to Danco Laboratories, LLC., a secretly organized company and sub-licensee of the eugenics-founded Population Council.

Then, in 1996, when Danco, “ran short on funds” and had “difficulty attracting investors,” the pro-abortion Packard Foundation stepped in with “$14.2 million in program related investments” to keep Danco afloat.

UCSF’s Mitchel Creinin is currently conducting a questionable study to disprove the effects of the abortion pill reversal. Creinin has, for years, received financial compensation from the abortion pill manufacturer, Danco. Creinin is involved in several organizations funded by Packard, an original investor of Danco.

In 1992, Creinin piloted another experimental abortion study at San Francisco General Hospital using the drugs Mifepristone and Methotrexate. He told women that, because of the potential for “birth defects,” there would be no turning back after using those drugs. On January 16, 1995, Stanley Henshaw, deputy director of research at the Alan Guttmacher Institute, a former “special affiliate” of Planned Parenthood, responded in the Pittsburgh Post-Gazette that no birth defects had been reported in women who changed their minds. The paper wrote, “Some women who have taken RU486 [abortion pill], have, in fact, changed their minds and delivered their babies, he said. And thus far, no birth defects have been reported.” 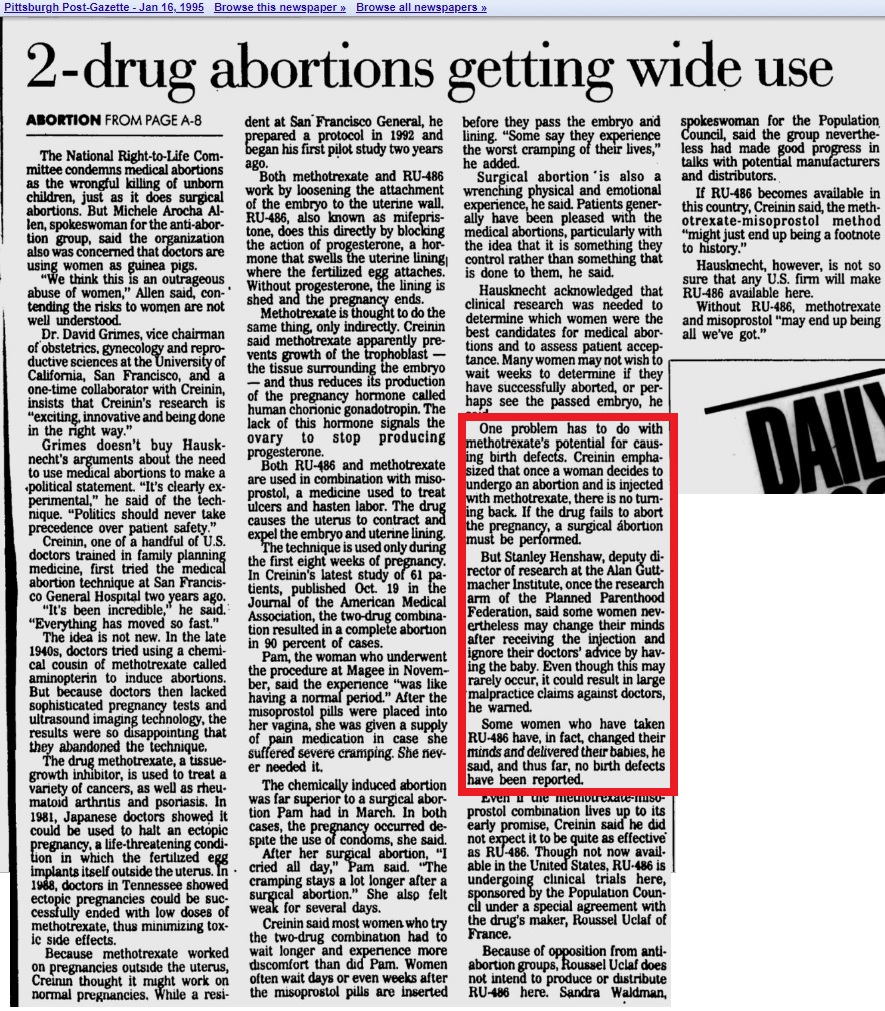 A July 1996 FDA Advisory Committee meeting transcript reveals that former Population Council Vice President Dr. C. Wayne Bardin, M.D., in charge of oversight of the new drug application (NDA) to the FDA for RU-486, explained to the committee why they told women in clinical trials that if they continued their pregnancies after taking the abortion drug their children would suffer from abnormalities: “In some of the animal toxicology on both drugs, there is evidence for teratologic changes in animals. There have been 21 children born to women who changed their mind and there have been three congenital anomalies. Now, statistically, that is not enough to determine what the effect is in humans. So, not knowing the effect in humans, we advised women about what the animal data showed and said that there was a considerable risk to them if they changed their mind because usually teratologic effects in animals will translate or have a high possibility of translating to teratologic effects in humans. so, these were the data that were presented to the women.”

Among the abnormalities the Council observed, Bardin explained were “three congenital anomalies in the children that were born were a club foot, some abnormal fingernails, and an immune disease which led to death.” They added, “The others are normal.”

In 1997, the Washington Post published a report, RU 486: Abortion By Pill Is Not as Simple As It Seems, in which they quoted a Population Council official who claimed “it found only a few cases” where women had continued their pregnancies after taking mifepristone and in all but one case, the paper noted that a “normal baby was delivered.” WashPo added, “As for misoprostol, there have been anecdotal reports of abnormal fetuses when pregnant women took the drug.”

As early as 1999, 2001, and 2002, the Population Council’s website noted that even though some abnormalities had occurred  after taking mifepristone to produce an abortion, “In most cases a normal baby was delivered.” They admitted that, in the case of a defect, “It is not clear whether these resulted from mifepristone, from misoprostol, from neither, or from both.” 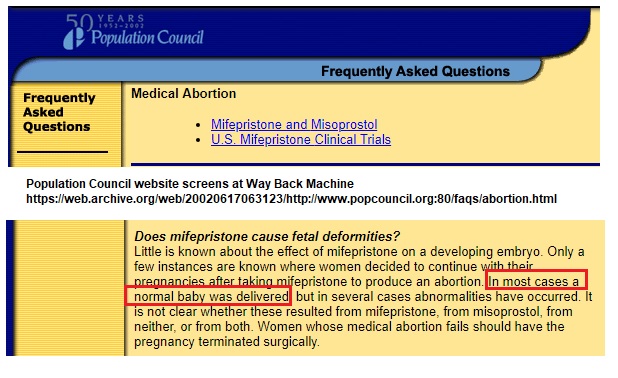 In part two, Live Action News will look at additional research, suggesting further that the abortion industry is not being exactly honest about this potential risk.