The U.S. Food and Drug Administration (FDA) has failed to seize and halt abortion pill websites from sending unapproved and illegal abortion drugs into the United States. It has also been silent on abortion industry protocols which defy its own Risk Evaluation Mitigation Strategy (REMS) abortion pill safety requirements. Yet the Campaign for Accountability (CFA), turning a blind eye to this clearly problematic activity, recently sent a letter asking the FDA to pull websites of pro-life organizations that advertise the abortion pill reversal (APR) protocol, which involves the use of the hormone progesterone (often used to prevent miscarriages) to counter the effects of the abortion pill, mifepristone.

CFA has a clear pro-abortion bias, even stating on its website that its purpose is to “use[] research, litigation, and aggressive communications to hold the anti-choice movement accountable.” CFA openly admits to targeting pro-life organizations to stop them from “gaining traction” in ending abortion. CFA writes:

In Greek mythology, Themis is a goddess of justice and order. But surely there is no justice for innocent human beings with no voice whose right to life is taken from them without due process. 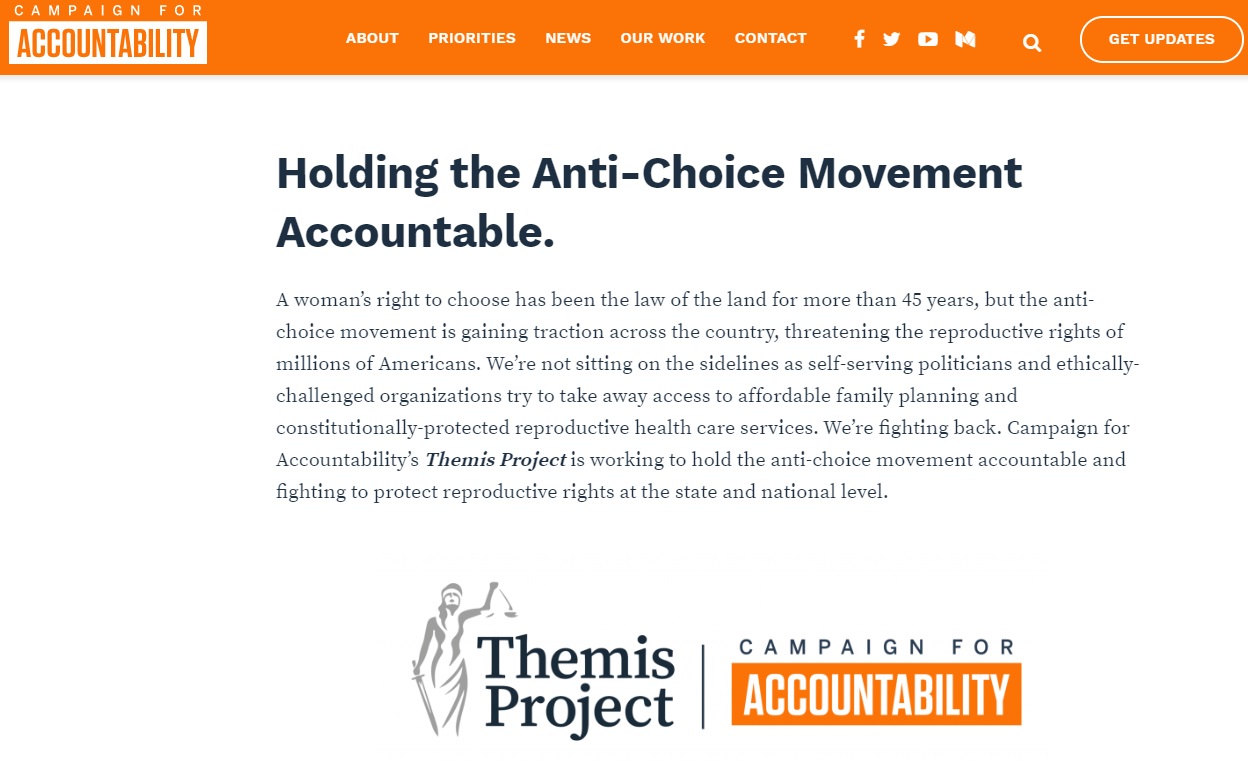 The CFA letter—possibly written in retaliation for letters to the FDA sent by Congressional leaders and pro-life organizations calling for the removal of websites illegally selling and shipping abortion pills into the U.S.—asks the FDA to “seize the website domains for… Abortion Pill Rescue, American Pregnancy Association, Obria Medical Clinics, and any other entities improperly marketing progesterone treatments to women who have taken mifepristone….” CFA’s letter was signed by Alice Huling, the organization’s Counsel, whose “pro bono work included several reproductive rights cases for which she worked with Planned Parenthood and the Center for Reproductive Rights to challenge anti-choice legislation and policies.”

CFA’s reasons for asking the FDA to seize abortion pill reversal websites appear even more ludicrous when you apply the same scrutiny to the abortion pill itself.

Untested and unproven use?

CFA’s letter feigns concern that “[t]he FDA has not approved this untested and unproven so-called abortion pill reversal treatment.” Yet CFA fails to criticize the abortion industry’s unapproved, off-label dispensing of abortion pills. It was the off-label use of the abortion pill by Planned Parenthood and others which led to the death women including Holly Patterson.

I learned of 10 reported deaths from sepsis (serious infection involving the blood) following medical abortions, and nine of these were from Clostridium sordelli and all involved these alternative, off-label treatments… That day in the hospital, there were officials from Planned Parenthood who showed up and said that nothing like this had happened before. I just didn’t believe it. 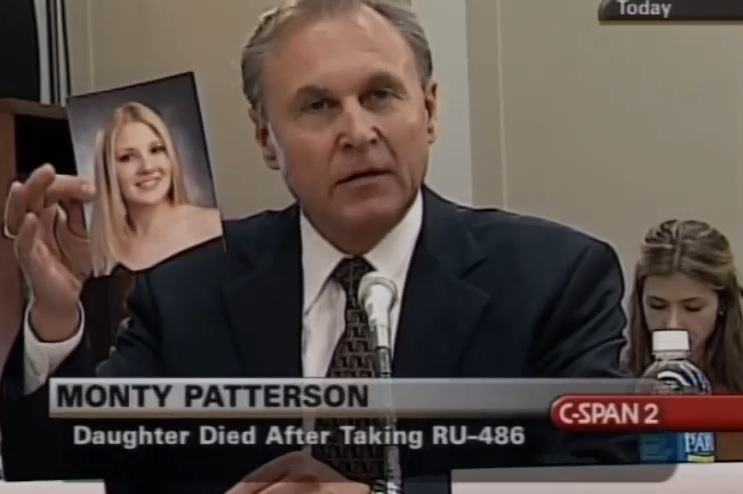 CFA’s letter repeatedly says that mifepristone (the abortion pill) is an “approved treatment,” yet CFA is silent when abortion insiders with clear profit motives defy the FDA’s safety requirements for dispensing the drug. Abortion Pill Rescue‘s Medical Advisor, Dr. Brent Boles, who has successfully implemented the APR regimen several times, told Live Action News that CFA’s letter demonstrates “an amazing level of hypocrisy.” Boles says it is the abortion industry which is “in complete violation of the FDA restrictions on medication abortion.”

“There are over 20,000 medications approved for use in America by the FDA,” Dr. Boles told Live Action News. “A very small number of them have restrictions on their prescribing. All the others are okay for off-label use.”

“But there are 57 drugs that are limited by REMS,” he added. “… Only 57 out of more than 20,000 are sufficiently dangerous to require that. Mifeprex [the abortion pill] is one of those drugs, and abortion activists criticize the off-label use of progesterone while also wanting to ignore the restrictions on one of the 57 most dangerous drugs available.”

As evidence, CFA references a 2019 study authored by abortion industry insider Mitchell Creinin and others, entitled “Mifepristone Antagonization With Progesterone to Prevent Medical Abortion.” But in reality it is Creinin’s “study,” terminated sometime between August and September 2019, that is deeply flawed. The study was terminated after enrolling just 12 pregnant women after attempting to recruit 40. Creinin and his Planned Parenthood collaborator, Laura Dalton, then intended to give some participants progesterone or a placebo. Mitchell D. Creinin, MD was a consultant for Danco Laboratories, the abortion pill manufacturer. The study was sponsored by the University of California-Davis and the Society of Family Planning, both of which have strong ties to abortion. It was then published by the Journal of Obstetrics and Gynecology, commonly referred to as “The Green Journal,” the official publication of the pro-abortion American College of Obstetricians and Gynecologists (ACOG). The study was the result of a failed clinical trial published under the name, “Blocking Mifepristone Action With Progesterone.” 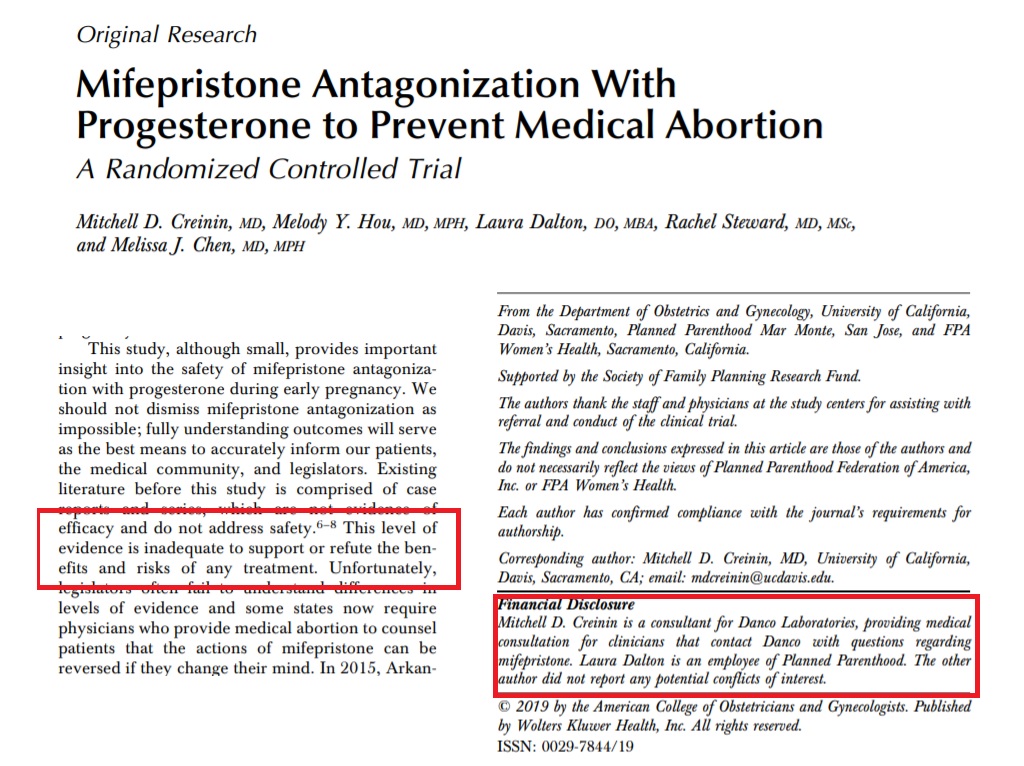 Creinin has a potential profit motive in all of this. He has a long history with abortion. He has received consulting fees and compensation as a consultant for abortion pill manufacturer Danco. He has received an honorarium from Danco and provided “third-party telephone consults” for the company as well. He was a founding member of the Society of Family Planning (which collaborated on his study), and has been financed by the Packard Foundation, one of Danco’s major financial investors. Additional information can be seen here. 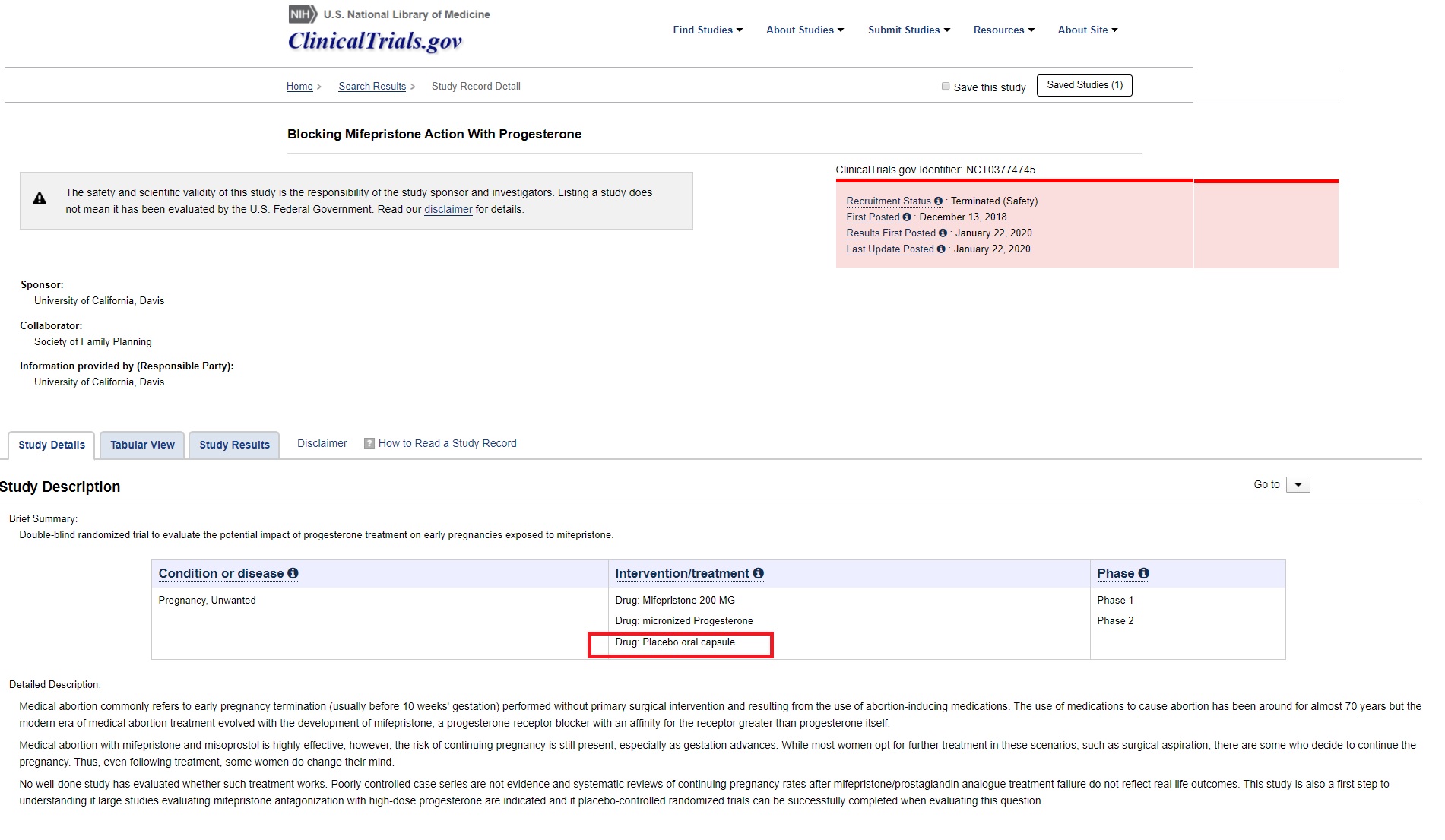 CFA claims, “Women should not be used as guinea pigs unknowingly.” Of course, this is true. And yet, CFA has been silent on the unethical abortion trial testing abortion pills on pregnant West African women in Burkina Faso who are in their late second trimester of pregnancy (from 13-22 weeks). The abortion pill is currently only approved by the FDA up to 10 weeks (70 days of pregnancy). Multiple lawmakers have raised concerns over this trial.

CFA’s phony attempt to shut down real choices for women is an outrage. If the Campaign for Accountability was truly concerned with accountability, it would join the pro-life movement in demanding that the FDA reign in the dangerous and untested use of abortion drugs by Planned Parenthood, Carafem, Gynuity Health Projects, and others.

Of course, because CFA is 100% pro-abortion, that will never happen.