Reproductive Health Supplies Coalition (RHSC) revealed this strategy in a webinar, which includes a presentation and video. Gynuity received a $108k grant from the RHSC’s Innovation Fund to conduct “a landscape analysis that will identify market gaps, bottlenecks, and potential country-level opportunities to register and commercialize mifepristone for its other indications.”

Formed in 2004, RHSC took off in 2012 when it became involved in the Gates-funded Family Planning 2020 initiative. The coalition includes the Bill and Melinda Gates Foundation, the Bixby Center for Global Reproductive Health, the David and Lucile Packard Foundation, DKT International, GenBioPro, the Guttmacher Institute, Ibis Reproductive Health, Planned Parenthood, and the Population Council. Its current executive committee includes representatives from the Population Council, the Bill and Melinda Gates Foundation, Planned Parenthood Federation of America, and the United Nations Population Fund.

Jennifer Blum, Gynuity’s VP for Programs and Strategic Initiatives, and former Program Officer for the Packard Foundation—a  major early investor in the manufacturer of the abortion pill—said in the webinar that registering the abortion pill to treat conditions unrelated to abortion is to “bypass hurdles.” Blum noted, “The number of countries with mifepristone [the abortion pill] is increasing but in places with restrictive abortion laws, access remains challenging.”

In addition to the “known” indications such as “incomplete abortion, missed abortion, second-trimester abortion, [and intra-uterine fetal death],” the webinar notes that there is interest in labeling the drug “specifically for menstrual regulation” in places like West Africa and South America. 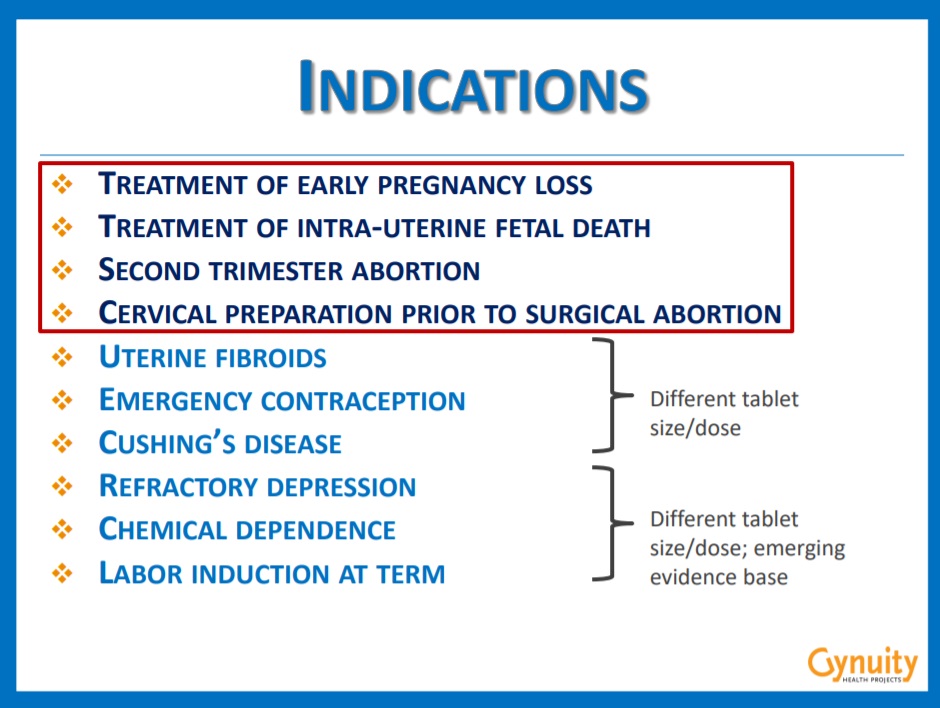 Gynuity Senior Program Associate Laura Frye introduced a “tangible briefing document,” summarizing a list of additional indications that would get mifepristone into pharmacies around the world. The document states (emphasis added):

One strategy to increase availability and market sustainability of mifepristone is to register it for additional indications. Several of these “uncontroversial” indications are legal in most jurisdictions and could provide an entry point for the medication to be listed on national drug registries, stocked in hospitals and other health care facilities, and integrated into health care systems.

In countries where there are highly restricted legal indications for abortion and/or where opposition to abortion on request impacts drug registration regulatory processes, focusing on other indications may eliminate some hurdles to product registration. Additionally, in the face of constrained health care budgets, medications that address multiple indications may be more appealing for purchase by health systems.

The group expressed the importance of selecting medical conditions that would require the same dosages needed for effective chemical abortions as “a segway to registering the same 200mg tablets” for a chemical abortion. Blum then claimed other abortion pill stakeholders have an interest in exploring this expansion option but have little time or money to develop or implement a strategy. Those stakeholders include:

Ayisha Diop, a Program Associate for Gynuity, identified six countries where abortion is either restricted or no abortion pill products are registered: Burkina Faso, Colombia, Kenya, Latvia, Pakistan, and Senegal. She stressed a need to “provide a legal cover… so that pharmacists and providers would feel safe using the medication.” Diop added that the legal indication should be “non-abortion related so that it wouldn’t cause controversy.”