“With the resounding support of the Wyoming legislature and endorsement of the Governor, Wyoming has taken the important step of protecting these vulnerable citizens taking their first breath of Wyoming air,” said Nathan Winters, executive director for Family Policy Alliance of Wyoming. “This legislation will stand as a silent but strong guardian over any infant surviving an abortion by requiring that medical professionals carry out their ethical and medical duty to provide appropriate medical care or genuine comfort care for a newborn.”

Senate File 34, known as “Born alive infant–means of care,” requires that all “commonly accepted means of care that would be rendered to any other infant born alive shall be employed in the treatment of any viable infant aborted alive.” Any abortionist must “take medically appropriate and reasonable steps to preserve the life and health of an infant born alive” during an abortion in which a child accidentally survives.

The main change between last year’s bill and this year’s bill is the addition of the language “any viable infant” meaning that if the infant is born alive before the age of viability, medical care is not required.

However, the age of viability changes based on not just when, but where the child is born. A premature child born in an abortion business will not have access to the same level of care that a premature child born in a hospital with a high-level neonatal intensive care unit will have. In addition, the abortion industry doesn’t believe in a specific age of viability though medical consensus puts that age at 24 weeks, and babies born as young as 21 weeks have survived and thrived with medical assistance.

Planned Parenthood abortionist Colleen McNicholas admitted as much when she testified before the U.S House Committee on Oversight and Government Reforms in 2019, stating that there is essentially no such thing as viability. She attempted to avoid questions from Sen. Thomas Massie (R-Ky.) regarding the medical consensus for viability, but eventually answered, saying:

So, viability is a complicated medical construct. There is no particular gestational age. There are some pregnancies in which a fetus will never be viable. There are a number of different factors that we think about when considering if a pregnancy isn’t viable.

So while she claimed that Planned Parenthood commits abortions up to viability, she wouldn’t give an age of viability because, to her, there is no set age and viability is completely subjective. And therefore, she couldn’t give Massie the age limit at which her own facility stops committing abortions.

“[M]y practice includes abortion care through the point of viability,” she said, “and as we previously discussed, that could be at any point.”

Disturbingly, in light of this new law, abortionists in Wyoming will have the ability to determine what actions are “appropriate and reasonable” when a “viable infant” survives an abortion. Those actions cannot including taking no action whatsoever — unless the baby isn’t considered “viable.” According to the pro-abortion Guttmacher Institute, as of 2017, there are two abortion businesses in Wyoming, neither of which are Planned Parenthood facilities.

While the abortion industry denies that infants survive abortions, the Centers for Disease Control and Prevention reported that from 2003 to 2014 at least 143 babies were born alive during abortions and died after birth. This number is likely much lower than the actual statistic, however, because, according to the Abortion Survivors Network, only eight states report the number of infants who survive abortions. 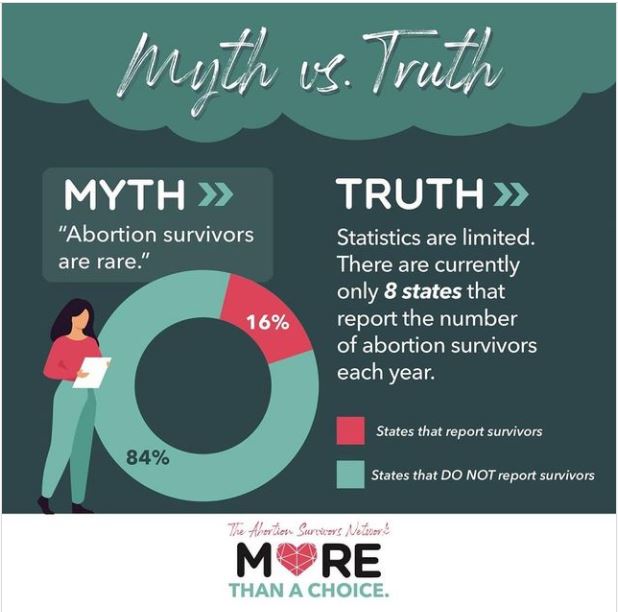 Gianna Jessen survived an abortion in 1977 and shares her story and pro-life message. “I was literally burned alive in my mother’s womb for 18 hours,” she told The Daily Signal. “I should be blind, burned, and dead. Had [the abortionist] been there, he would have ended my life with strangulation, suffocation, or leaving me to die without a thought.”

All children deserve protection, both born and preborn, but if the abortion industry can’t even agree that born children need protection after surviving an abortion, then they are not truly committing abortion for reasons of “health care.” Once a child is born, any action taken to help her would not have an effect on the mother’s health. Instead, ensuring the child’s death would mean a successful “service” sold and completed by the abortion industry.