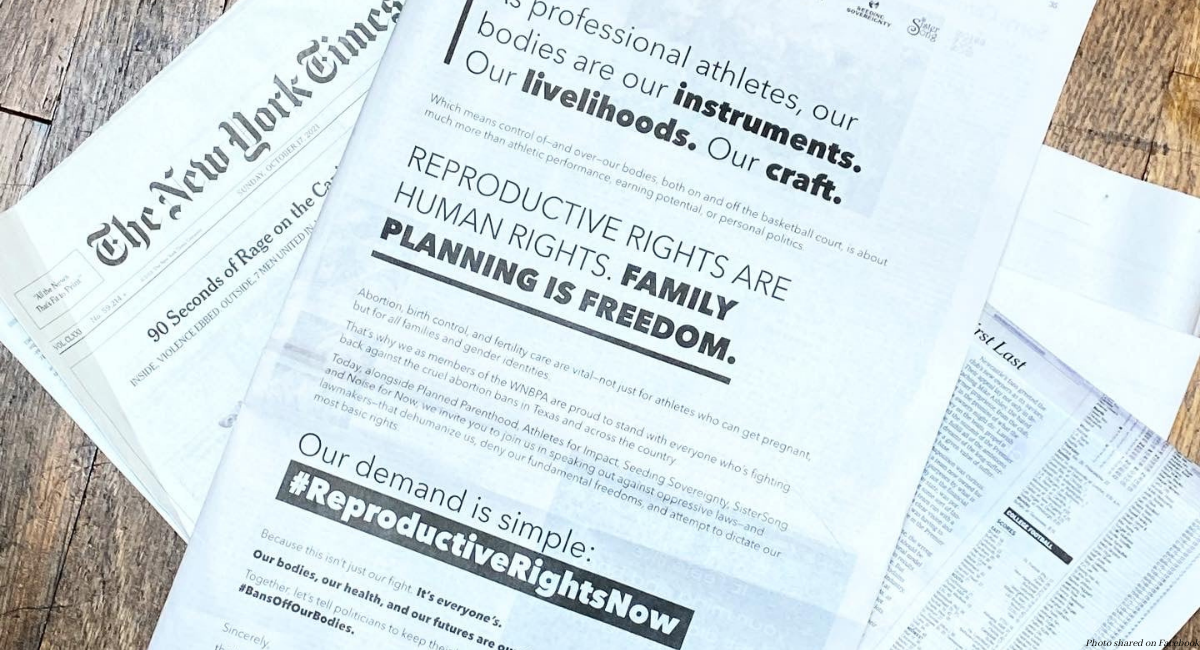 On October 17, the WNBA Union teamed up with Planned Parenthood and other abortion advocacy organizations to run a full-page New York Times ad attacking the Texas Heartbeat Act.

“As professional athletes, our bodies are our instruments. Our livelihoods. Our crafts,” the ad read. “Which means control of — and over — our bodies, both on and off the basketball court, is about much more than athletic performance, earning potential, or personal politics. Abortion, birth control, and fertility care are vital.”

The ad continued, “That’s why we as members of the WNBA are proud to stand with everyone who’s fighting back against the cruel abortion bans in Texas and across the country,” and asked readers to “join us in speaking out against oppressive laws — and lawmakers — that dehumanize us, deny our fundamental freedoms, and attempt to dictate our most basic rights.”

The letter concluded with 11 signatures. Only four were those of active female professional basketball players. The rest of the signatories were members of the Executive Committee or the Justice, Equity, Diversity, and Inclusion Committee of the Women’s National Basketball Players Association (WNBPA), a union representing WNBA players.

The union failed to understand the dehumanization of the preborn inherent in their own ad, and the irony of their own statement asking readers to speak out against “[laws] that dehumanize us, deny our fundamental freedoms, and attempt to dictate our most basic rights.” Instead, their position unquestioningly supports the abortion industry’s narrative, which pits women against their preborn children in a zero sum game of rights, failing to acknowledge that policies can and should support both women and their children.

Skylar Diggins-Smith, who represented Team USA women’s basketball at the Tokyo Olympics, summarized the synergistic effect many female professional athletes experience between their sport and their motherhood when she said, “I thought it was important for my son to see me play, to see me work, to see me on the court. And I want his aspirations to be, in whatever he wants to be, to chase his dreams, to go after his dreams. I want him to see me on this stage. So every time I may start to feel a little bit overwhelmed, I just remember my why. He is my why.”