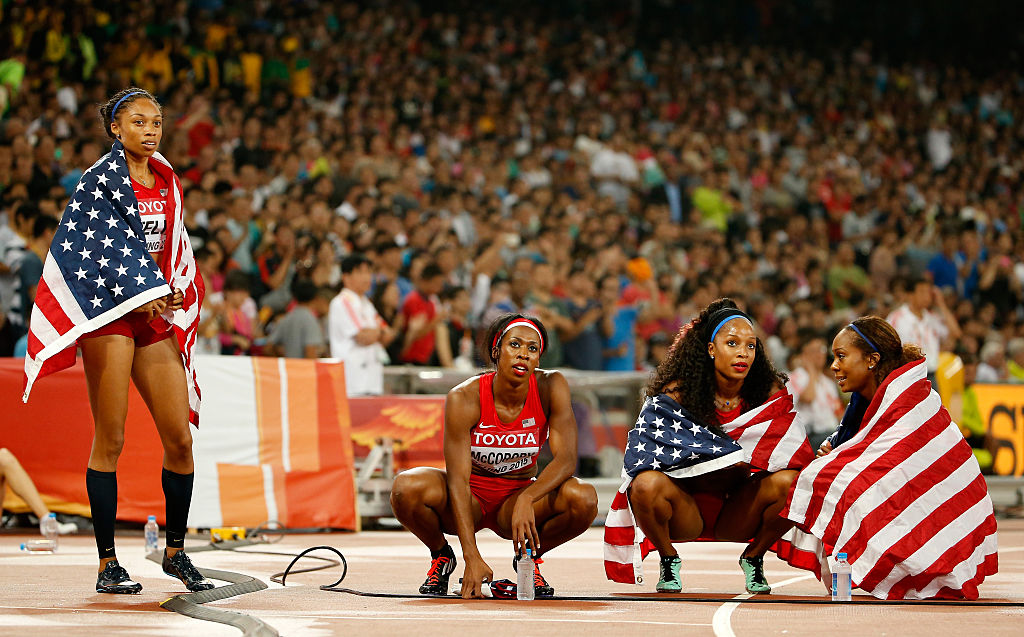 (Right to Life UK) Sanya Richards-Ross, a former Olympic track and field athlete, has spoken out about being pressured into an abortion.

Speaking about her journey to an abortion clinic in her new book she said:  “I knew I was at a crossroads. Everything I ever wanted seemed to be within reach. The culmination of a lifetime of work was right before me. In that moment, it seemed like no choice at all… All of the crying leading up to that moment had left me so numb that I barely remember the cold instruments as they brushed against my skin”.

“I made a decision that broke me”

The next day she boarded a flight to Beijing to compete in the 2008 Olympic Games. She did not tell her coaches, her teammates, or her father. She wrote of how, in the individual 400 metre sprint, her feelings of shame, guilt, and unworthiness over feeling pressured into the procedure affected her performance and resulted in her third-place finish instead of the Olympic gold she had been the favourite to win. She felt: “I made a decision that broke me”.

She told Sports Illustrated Now, “I literally don’t know another female track athlete who hasn’t had an abortion… and that’s sad”. She gave her opinion that the situation could be attributed to misinformation spread by peers on college campuses that pregnancy is impossible for women athletes who have lost their menstrual cycles due to intense exercise.

Richards-Ross’ description of feeling she had “no choice at all” and risked losing her work if she did not get an abortion speaks to a toxic culture that encourages athletes to do “whatever it takes” to perform at the highest level, even if it means ending a pregnancy they wish to continue with.

Christina Pirrotta, a rising fourth-year student at the University of Chicago who plays on her university’s football team, told VerilyMag: “I know as an athlete that so much of our identity is centered around the sport we play and we have so many ambitions and hopes for what we can do. While I know the timing for her pregnancy wasn’t ideal, I believe that [Brianna] McNeal would have still found her way in life—as a mother and as an athlete”.

Pirrotta is involved with Students for Life of America, an organisation that has created a “Pregnant on Campus Bill of Rights” to help educate women about protection they’re entitled to. She went on: “I think women who have unplanned pregnancies are in a very difficult spot because at least in the current moment it may seem like so much is ending”.

For student athletes in the US, scholarship money is also a major concern. The Entertainment and Sports Programming Network (ESPN) contacted hundreds of administrators and athletes. Their investigation revealed policies that essentially forced vulnerable women into abortion clinics. At least seven athletes at Clemson University in South Carolina had undergone abortions due to fear of losing their places on their sports teams — and their corresponding financial support.

One student told ESPN they had signed a document that stated: “Pregnancy resulting in the inability to compete and positively contribute to the program’s success will result in the modification of your grant-in-aid money”, and described undergoing a second abortion after being warned about her scholarship by a university administrator.

ESPN also spoke to Cassandra Harding, who attempted to access an abortion to preserve her track scholarship at the University of Memphis, however she discovered she was four months pregnant and had thus passed the legal abortion limit. She had also signed a policy that specified pregnancy as a violation of her scholarship would cause “immediate dismissal and nonrenewal of scholarship”. Indeed, her coaches followed through with this policy and cut Harding’s scholarship off after they learned she was having a baby.

Illegal under US law

Not only are these policies morally abhorrent, but under Title IX, a federal civil rights law in the US intended to prevent sex discrimination, any university or school that receives federal money cannot legally discriminate against students because of their sex or parental status.

A series of New York Times articles in 2019 also revealed multiple testimonies from women who reported losing sponsorship money from Nike after they gave birth. Phoebe Wright, a sponsored track star, said “getting pregnant is the kiss of death for a female athlete”.

Olympic gold medalist Allyson Felix also wrote in a New York Times editorial that her decision to have a child was “terrifying” because it coincided with renegotiating her Nike contract. She also revealed that the company wanted to reduce her pay by 70 per cent, and refused to provide financial protection if her performance dipped during or after pregnancy.

She went on, “Athletes are told to shut up and play. We are told that no one cares about our politics. We are told that we’re just entertainers, so run fast, jump high, and throw far. And don’t mess up. But pregnancy is not messing up; for women, it can and should be able to be part of a thriving professional athletic career”.

Felix is now sponsored by Athleta, a women’s apparel brand that offers full maternity benefits, and she recently spoke out again to say that during the process of the discriminatory contract negotiations that led her to sever ties, Nike requested that she participate in “female empowerment” advertisements. “My stomach dropped. I was like, this is just beyond disrespectful and tone-deaf”, she told Time magazine.

It is utterly despicable that modern educational institutions and corporations routinely pressure women athletes into abortions, as is evident from these athletes’ heartbreaking testimonies.

While it is good news that brands like Athleta are making a step in the right direction by offering full maternity benefits, more brands and universities must change their behaviour for this to make a general impact on the treatment of female athletes.

Sadly this stigmatisation of pregnant women and pressure to abort is not exclusive to the sports industry. Earlier this year, singer Sinead O’Connor spoke out about how she was pressured to abort her baby and recalled the doctor saying: “Your record company has spent £100,000 recording your album. You owe it to them not to have this baby.

UK polling has also shown that a shocking 7% of British women have been pressured into an abortion by their husband or partner. The story of these athletes and many others thus firmly contradicts the idea that abortion is always the ‘choice’ it is claimed to be.