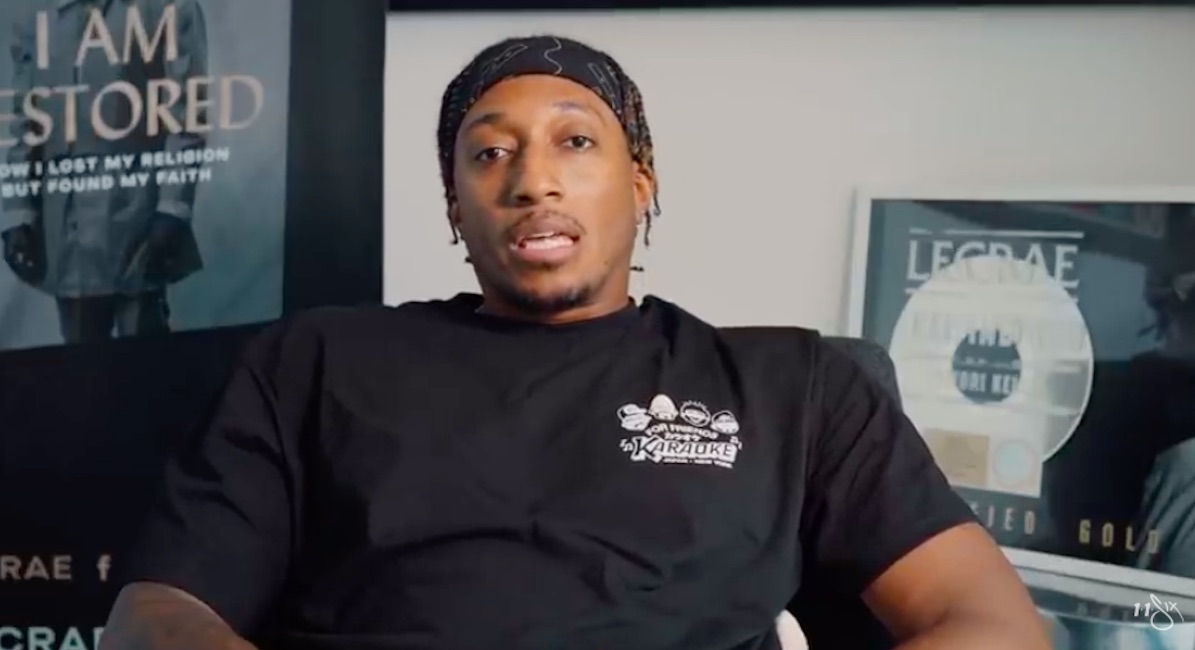 Lecrae, a Grammy-winning rapper and self-proclaimed Christian, posted a video last week in which he surprisingly seemed to shift blame upon the pro-life movement for the fact that underprivileged people choose abortion, as he and his girlfriend did when they aborted their child years ago as young adults. He also incorrectly suggested that making abortion illegal will have no effect on people undergoing elective abortion because for many it will still seem like the only option.

But those who truly believe abortion is killing a human being know that this is inconsistent thinking. Laws against murder and rape, for example, do not stop murder and rape, yet those laws are in place to deter the devaluing of human life, and to enforce penalties against those who refuse to respect it. And statistics show that legalizing abortion (which is the killing of human beings while still in the womb) increases abortion. No truly civilized society willingly accepts the killing of innocent human beings as a “solution” to society’s economic or social problems.

Lecrae’s apparent blaming of the pro-life movement seems like an unexpected turn. After all, this is not the first time Lecrae has spoken publicly about abortion. In 2014, Lecrae released an album that featured a song about the abortion of his preborn child and the guilt and grief he carried from that decision a decade later. He went on to discuss the experience more fully in interviews and spoke in defense of the preborn. In his recent video, Lecrae affirmed, “I have a million reasons to be pro-life. By that, I mean I have a million reasons to care for the unborn.”

Even so, Lecrae attempted to distance himself from the pro-life movement, which is actively engaged in the fight to protect these innocent human lives every day.

In the wide-ranging video, Lecrae mainly discussed the underlying social issues that drive people to abortion, but he demonstrated a disturbing lack of knowledge by mentioning hypothetical and unrealistic scenarios such as a woman who is “going into labor” when her “life is on the line.” As Live Action News has reported many times, intentionally killing a preborn child does not save lives and is never necessary, especially late in pregnancy when the child can be delivered more quickly and safely via C-section in a hospital than via a days-long process of late-term abortion.

Is it pro-lifers’ fault that some people think abortion is “the only option”?

Lecrae seemed to suggest that he feels the broader pro-life movement is not attempting to address the socio-economic factors that drive people to consider ending a child’s life in abortion. He said he pressured his girlfriend to abort their child when they were both young, unemployed or with limited employment, and did not have family support for choosing life as they both came from single-parent households with limited resources. When facing an unplanned pregnancy in these circumstances, Lecrae said that for him, as with many people in similar circumstances, abortion seemed like “the only option.” Unfortunately, the rapper then seemed to fault the pro-life movement for not being there in his time of need, saying, “No advocates stepped forward to help us sort of navigate this situation….”

He noted in the video that today, “I would want to see holistic care for young women who are processing the reality of having an abortion.” What’s interesting is that Lecrae does not mention that this pro-life care already exists. There are 2,700 pregnancy centers providing care for young women who are experiencing unplanned pregnancies and even for those who have already had abortions. In 2019, these centers served over two million people, for free. In 2017, the pro-abortion Guttmacher Institute found 1,587 abortion facilities in the US, which do not provide free services.

Pregnancy centers outnumber abortion facilities by over 1,000 in the US alone — and they are almost entirely funded by donations, not by taxpayers. Planned Parenthood, on the other hand, which commits 40% of the nation’s abortions, receives over half a billion dollars in taxpayer funding every year.

Lecrae does not indicate whether he and his girlfriend sought help at any time from the thousands of pro-life pregnancy centers located in communities across the US, nor does he mention that they ever even encountered pro-lifers. But as those who visit pro-life pregnancy centers know, there is public assistance that may be available to help them afford the birth of a child, assistance and classes to help in raising a child, and resources for those who consider placing their child for adoption.

Toni McFadden, the Minority Outreach and Healthy Relationships Director for Students for Life of America, posted a video on Instagram responding to Lecrae — specifically, to his implicit assertion that the pro-life movement “isn’t doing enough” and is more concerned with the “baby being born” than with the socio-economic realities that push marginalized people to think that abortion is their only option. She said, bluntly, “That’s a lie.” 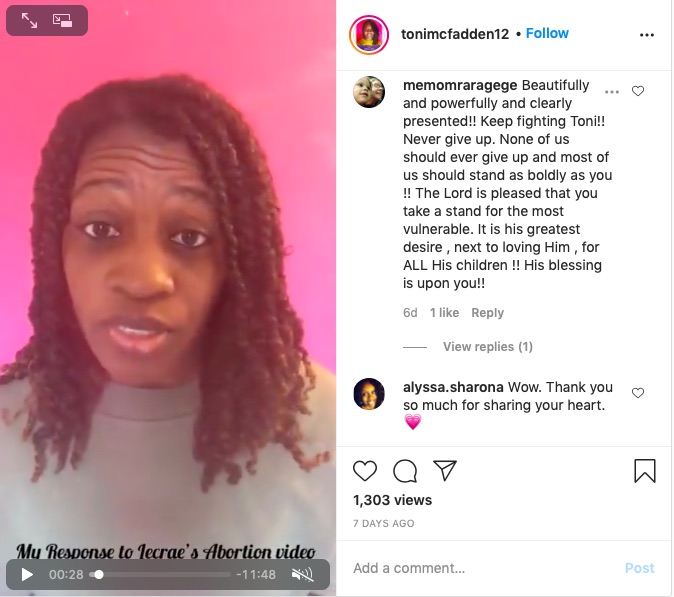 McFadden elaborated, “The pro-life movement that I’m a part of is looking at all aspects and is the most compassionate towards those who are in the most difficult, horrific situations.” She noted that pro-life pregnancy resource centers are doing precisely what Lecrae says he wants to see: addressing the systemic issues that make it difficult for many people experiencing an unplanned pregnancy to choose life.

She also countered the claim that pro-lifers must address every social issue before defending the lives of the preborn. As Live Action News has discussed many times, fighting against the slaughter of innocent human beings in the womb does not require a person to support all other causes. Just because the American Cancer Society does not address diabetes, for example, does not mean the ACS “isn’t doing enough” to help people.

As a fellow Christian, McFadden shared her own story of abortion and how she ultimately found healing. She pointed out that Lecrae’s focus on external circumstances obscures the real issue: ending the life of an innocent child.

READ: To be pro-life, you must support the right to life of preborn human beings

McFadden said, “I chose to end the life of my child because I was selfish. Was there fear? Yes. Was there ‘I didn’t know there were other options’? Yes.” For McFadden, and for many post-abortive mothers and fathers, taking ownership of the decision is the path toward forgiveness and healing. As McFadden points out, making excuses and blaming outside factors for the abortion can trap people in victimhood instead of allowing them to receive grace and heal.

People in all walks of life consider abortion, and external circumstances are not the only reason.

McFadden noted that the abortion industry also wants to keep the focus away from the decision to end the life of a child. That is the reason the abortion industry relies so much on euphemisms. “They [abortion advocates] don’t want to say, ‘Abortion is murder,’ but it is,” she said. Abortionists have also used systemic issues as an excuse to continue killing preborn children rather than addressing the individual needs of mothers seeking abortion.

Addressing Lecrae’s assertion that pro-life laws do not save lives (which is false) or address systemic issues of injustice, McFadden asked, “Would you say the same thing about slavery?” McFadden concluded her video by saying she found Lecrae’s video “wishy-washy.” She said, “My challenge to you, Lecrae, is to bring hope into these situations and to not make excuses for why people are going to continue to choose to take life.”

In response to Lecrae’s video, Jaylem Durousseau, another staffer for Students for Life of America, wrote, “Of course abortion is related to socio-economic causes, but without first understanding the moral implications, the socio-economic ones carry no weight. We need to fight for everyone’s human dignity and for laws so that individuals like Lecrae and the woman he was with never are left with a belief abortion is their only option.”

As others have pointed out, Lecrae did not frame his video as a definitive indictment of the pro-life movement; his stated aim was to share his personal opinions based on personal experience. Hopefully, the thoughtful responses he has received will further the conversation about what it looks like to address individual people in difficult circumstances and show that, even in the most challenging situations, people can and should defend the most vulnerable and reject the violent destruction of human life.