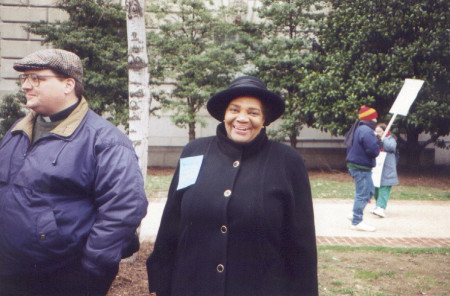 The Catholic and pro-life communities are mourning the death of Dr. Dolores Bernadette Grier, an advocate for life and a gracious Black leader in the New York archdiocese, who passed away on February 22, 2018 — her birthday. As a Black pro-life activist, Dr. Grier founded the Association of Black Catholics Against Abortion and served on the board of the African American Society Against Abortion. She was outspoken about abortion’s impact on the Black community.

Dr. Grier’s voice in defense of life will be missed, but we in the pro-life community are grateful for the legacy she has left behind. A Funeral Mass will be offered at Dr. Grier’s parish church, St. Charles Borromeo in Harlem, on Wednesday, March 7 at 11 a.m. 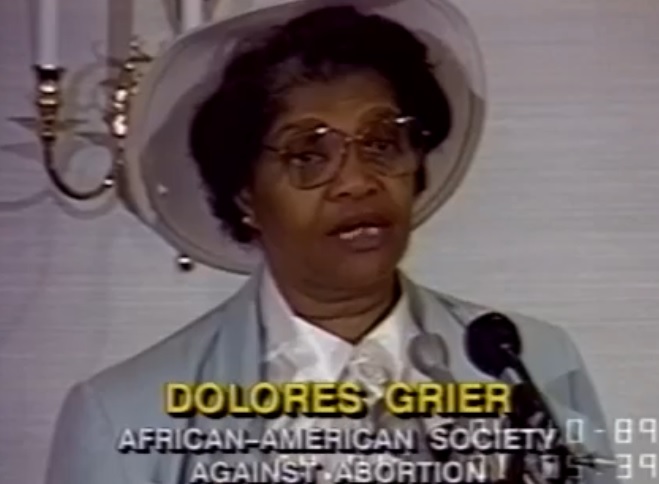 In 1989, Dr. Grier joined a group of pro-life women, including, Dr. Mildred Jefferson, the first Black woman to graduate from Harvard Medical School and the first woman employed as a general surgeon at Boston University Medical Center, for a press conference picked up by C-SPAN. Dr. Grier began her speech by calling abortion racism:

We do believe that more than anything else, abortion is racism. It is a way of pruning, if you will, the Black population…. In 1973, shortly after civil rights struggles – when there were more benefits for the Black people, all of a sudden we were given this free, free thing from the society of America: abortion. 78 percent of your free abortion clinics were placed in Black and Urban areas, for the purpose of [inaudible] free of charge from a racist society. To put it in words of one pro-abortionist, “We don’t need so many Negroes anymore – there’s no more cotton to pick.”

It is demeaning to the Black woman, because, when you wanted us (in other words) when we were on the plantation, you snatched the newborn baby from our arms and sold it into slavery. Today, you cut it out of the womb and throw it in the garbage or use it for human experimentation.

Dr. Grier later told those attending that conference that a majority of Blacks oppose abortion and she said she was hopeful that the attitudes of Americans are changing. “I believe that as more and more of the education and the true fact, that there is a life in the womb, that people will begin to say, ‘I do not want to kill,'” she said.

In a prepared statement (page 173) before the Senate Labor and Human Resources Committee during its May 1990 hearing on the “Freedom of Choice Act,” Grier wrote:

After many years of the civil rights struggle for equal opportunity in housing, education and employment, Black women have only been granted the right to kill their children in the womb. Free health care only includes abortion…. The White master is still telling Black people what is best for us – death instead of life.

I believe that one of the reasons that so many women, especially poor women, minority women, Black women in particular and young women, have abortions is because they really do not know what an abortion does, how it is performed and the effects after they have an abortion and the complications…. Abortion is the termination of a pregnancy which results in the death of a developing human. This is how it is defined in Webster’s medical dictionary 1986. Abortion, as many people may believe, is not a medical procedure; it is invasive surgery where the surgeon uses steel instruments to terminate the life of the unborn child in the mother’s womb…. 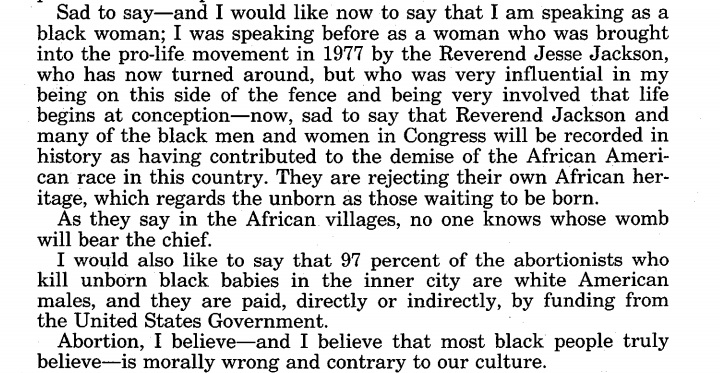 Advances in science have opened the womb that was once hidden, so we can now observe the growth and the movement of the unborn child through ultrasound…. Yet, the child terminators endeavor to hide the humanity of the unborn by describing the child as a “fetus….”

I would like to now say that I am speaking as a [B]lack women…sad to say that…many of the [Bl]ack men and women in Congress will be recorded in history as having contributed to the demise of the African American race in this country. They are rejecting their own African heritage, which regards the unborn as those waiting to be born. As they say in the African villages, no one knows whose womb will bear the chief. I would also like to say that 97 percent of the abortionists who kill unborn [B]lack babies in the inner city are white American males, and they are paid, directly or indirectly, by funding from the United States Government…

In 1992, Dr. Grier again agreed with other Black leaders within her community that abortion was a tool of genocide. “What do you see here? Unless you are white, unless you are wealthy… you really shouldn’t come into the world,” she stated.

She then questioned why abortion was being used to solve the problems of poor women, and referred to abortion as “pruning the Black race,” a concept Dr. Grier said began with Planned Parenthood founder Margaret Sanger’s “Negro Project”:

We were not equal to white people and she [Margaret Sanger] didn’t think that we should populate the earth and she wanted to eliminate anybody who had color.

Why are you taking that woman, because of her situation, and resolving her problem by murder? What are you doing to her and what are you doing to yourself as a society by saying that this is the only way you can solve it? She is a human being, she can be talked to? 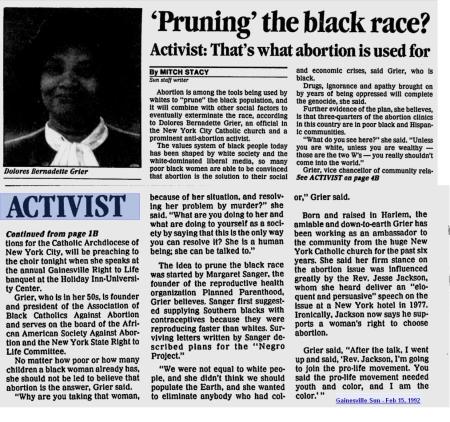 Dr. Dolores Grier saw Planned Parenthood and abortion as Black Genocide and the pruning of the Black race

In that same article, Dr. Grier said that as a woman of color, she was influenced to speak out about abortion after hearing a moving speech in 1977 by civil rights leader Rev. Jesse Jackson, who was once an outspoken advocate for life, at that time. She said, “After the talk, I went up and said, ‘Rev. Jackson, I’m going to join the pro-life movement. You said the pro-life movement needed youth and color, and I am the color.'”

Sadly Jesse Jackson soon changed his position on abortion when he ran for president. Read Jackson’s pro-life statements before his flip here.

In 1995, after President Bill Clinton nominated Henry W. Foster, a Black abortionist who had served on the board of Planned Parenthood, to be the Surgeon General of the United States, Dr. Grier spoke out, saying,”The man is not Black. The man is not white. He is an abortionist who terminates life in the womb and that’s what he should be judged by.”

Dr. Grier recently told the Catholic Program, The Journey Home, that we need to pray and fast more for life:

We must bear witness to true life. I say true-life because we have too many of those who say pro-choice. Pro-choice is the comfort zone for our legislators who’d rather say pro-choice – the right to choose. Choose what? Whether or not to kill the child in the womb, that’s what she’s choosing.

According to Catholic New York (CNY), Grier was named vice chancellor by Cardinal John O’Connor, then Archbishop of New York, in 1985. An announcement about Grier’s death published by in CNY says that the Grier was “believed to have been the first black woman appointed to such a position nationwide.” The publication then expounded on Grier’s pro-life stance:

Miss Grier spoke with conviction and authority against the “black genocide” of abortion that continues to grip the black and Hispanic communities in New York City, a message that was unpopular in some circles. In a 1994 CNY article about the first Central Harlem Vicariate Respect Life Conference, Miss Grier strongly criticized Planned Parenthood’s abortion practices. “What are they bringing to us, people of color?” she asked. “They’re not bringing jobs, they’re not bringing food, they’re not bringing skills. They’re bringing death.”

In 1993, Miss Grier refused an honor from the New York City branch of the NAACP because of the organization’s pro-abortion stance.

That 1993 NAACP “honor” was for Grier to be the recipient of the Women’s History Month award. She refused, stating, “As president of the Association of Black Catholics, I believe abortion to be a racist weapon of genocide against black people.”

Today, abortion disproportionately targets Blacks in the womb more than any other race, and the number one provider of abortions in the nation is Planned Parenthood. The abortion lobby would like to convince Americans that our society — and specifically the Black population of America — is okay with abortion, but this is simply false. Black activists like Dolores Grier have been warning America for years and years that abortion would decimate the Black community and become a tool of eugenic genocide against Black people.