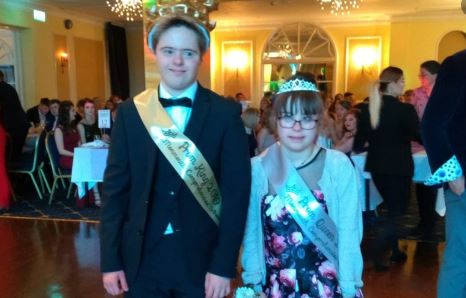 A teenage couple in the United Kingdom who both have Down syndrome were crowned prom king and queen by their classmates at their mainstream school on July 14. Both were thrilled.

Dylan Hughes and Amelie Barker, both 16, met when they were just three years old. After knowing each other for the majority of their lives, the began dating just six months ago.

“As teenagers do, they start looking at each other with different eyes and added interest,” Amelie’s mother Katharina told the BBC. “It has very much been driven by the two of them – they told us they were boyfriend and girlfriend and that they want to get married eventually. It’s all been planned out.”

READ:Man says father with Down syndrome inspired him to be the ‘best person’ possible

The cute couple each has accomplishments under their belts, and big plans for the future. Dylan represented Great Britain at the Down Swimming World Championships in Canada, and is preparing to compete in the European Championships. His mother Victoria describes him as being “sports mad,” and says he wants to be a P.E. teacher or a rugby player for Wales.

Amelie has a gift for working with children and plans to begin studying childcare in September. “She very much likes to work with children – she has a real knack for it,” said her mother.

Huge congratulations to the MCS 2019 Prom King and Queen, Dylan and Amelie pic.twitter.com/15tqhqnhRe

Dylan’s and Amelie’s mothers, along with a third mother Nicky Williams, worked together to set up a charity that supports families of children with Down syndrome, called 21 Plus, which they launched 10 years ago. They had heard the negatives of raising a child with the condition, and wanted to do something positive.

“No-one spells out all the things that could possibly go wrong for a child when they’re born,” Hughes told the BBC. “But when you have a child with a disability, with Down’s syndrome, they tell you the average life expectancy is 50; they won’t go to mainstream school; they won’t do this and that. They just say all the negatives.”

What began as a simple morning coffee for mothers of children with Down syndrome grew into the charity that includes speech and language therapy, school help, and annual education conferences. Their goal is to help people with Down syndrome “achieve their potential and increase access to opportunities.” They seem to have done just that for Dylan and Amelie.

People with Down syndrome live happy, successful, and amazing lives with accomplishments, including swimming the English Channel, saving lives, getting married, earning degrees, testifying before Congress, working in advocacy and holding public office, owning businesses, and more. Despite this, pro-abortion politicians still call for the destruction of preborn humans with Down syndrome, without giving them the chance to show the world what they are capable of. And even if a person with Down syndrome is non-verbal and doesn’t have a list of society-approved accomplishments, their lives are still valuable.

Aborting children with Down syndrome is an act of eugenics — singling out people for their disability and then killing them for it. No one deserves to die for simply being who they are.