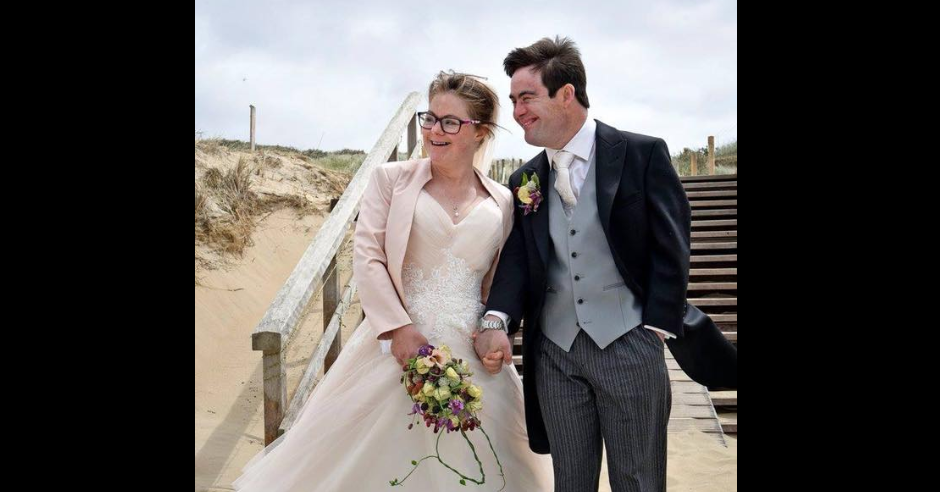 Two people getting married doesn’t normally make headlines. But for Lize and Ruben, the congratulations are rolling in from around the world. That’s because this happy couple is the first duo with Down syndrome to marry in the Netherlands in a decade, and only the second ever in that country. A post shared on Facebook by Special Olympics Nederland featured a photo of Lize Weerdenburg and Ruben Herschberg, racking up thousands of likes and shares, and hundreds of comments wishing them congratulations.

According to Dutch newspaper de Gelderlander, only one other couple with Down syndrome has gotten married in the Netherlands. The paper interviewed Lize, as well as her family, to find out their story. After dating for three years, Ruben proposed. “Ruben got on my knees with my parents in Utrecht,” Lize recalled. “Ruben is cheerful all day and he takes care of me, he often does the laundry and the groceries,” she said. “I can always do my own thing.”

300 guests celebrated Lize and Ruben’s wedding with them before they honeymooned in Greece.

In the Netherlands, as with much of Europe, babies with Down syndrome are often not wanted by their birth parents. Women who live in the Netherlands are told that they have a “moral duty” to have an abortion. Other countries, like Iceland and Denmark, have practically eradicated Down syndrome from their countries — but they’ve done so by eradicating those who have it, before they are ever born. Many who justify the eugenic practice of aborting babies claim that death is preferable for these children, because many believe a life with Down syndrome is filled with suffering. But as Lize and Ruben show, this is not true; that attitude is purely ableism in action. People with Down syndrome are happy, and lead rich, fulfilling lives.

Fear of disability is not an excuse to rob someone of the right to live.