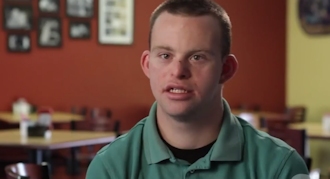 Meet the owner and operator of the “world’s friendliest restaurant,” Tim’s Place. Tim Harris, who was born with Down Syndrome, knew from his teenage years that he wanted to be a restaurateur when he grew up, and he never backed down from his dream — even in spite of his disability.

“We serve breakfast, lunch, and hugs,” Tim says. Although the Tim’s Place menu boasts some delicious-sounding meals, like the “Happy Day Breakfast,” and “Tim’s Olympian Breakfast,” Tim insists that hugs are the best thing he serves. “The hugs are way more important than the food,” he says. “The food is just food!” Aol featured this interview with Tim online:

Tim looks forward to going to work every morning, and enjoys it so much that he does a dance in the parking lot on his way into the restaurant. “I am so excited to go to work, so I do a dance off in the parking lot. It’s a dance of magic,” he said.  Tim said that his favorite part of owning his own business is “the people coming through the front door.” He greets his customers with a hug, especially when they look sad. He says that Tim’s Place is the “special place to be at,” because he operates it.

“When I was a kid,” Tim shares, “I wanted to own a restaurant. So I asked my dad to help me out. I’m so glad I did.” Tim insists that people with Down Syndrome can’t let anything get in the way of their dreams: “I did not let my disability crush the dreams,” he says. “People with disabilities can do anything they set their minds to. They’re special. We are a gift to the world.”