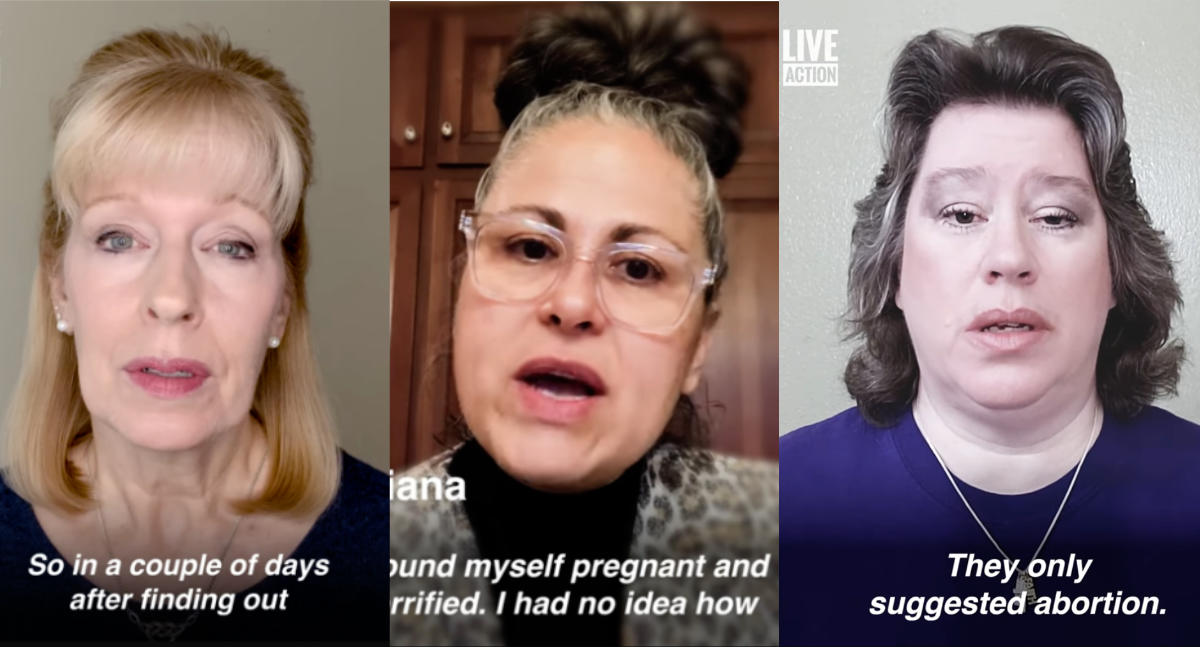 Abortion proponents claim women don’t regret abortion and ignore the countless women who have come forward to give voice to the trauma they suffered following their abortion procedures. Three of those women recently shared their personal, heartbreaking abortion stories with Live Action for its new “Can’t Stay Silent” campaign.

Susan was a freshman in college when she and her high school sweetheart, whom she planned to marry, found out she was pregnant. Her boyfriend went to an abortion facility and brought her back a brochure. The staff at the facility advised an abortion and claimed the baby was nothing more than cells and tissue.

Without telling family members or friends, Susan went to the abortion facility with her boyfriend and spoke with the abortionist for just a few minutes before she was on the table, crying as the abortion was carried out. “And the suction I remember was loud and the procedure was full of sharp cramping, pulling pain. It was very traumatic. I still remember that day as if it was yesterday,” she said.

Though Susan initially felt relief, that feeling gave way to painful emotions. Just a couple of months later, she and her boyfriend broke up, having never spoken about the abortion.

“I felt this deep emptiness, like there was a black hole in the pit of my stomach. I knew something had been taken from me that I could never get again. Just shame, emptiness, regret, sadness. It’s like my emotions flatlined.” She put the heavy emotions away in a metaphorical box but expressed them through dangerous behaviors — partying, drinking, and becoming promiscuous. She also developed an eating disorder. It was seven years before she found Jesus and her life began to change.

One night while driving home from Bible Study she saw a woman stumbling on the side of the road. She helped the woman, who was drunk, to get home. That woman was sobbing over the death of her 29-year-old son and soon expressed to Susan that she had had an abortion and wondered if God punished her for it with her adult son’s death.

“And when she said the word ‘abortion,’ it’s like that lid to that box blew open as all the emotions surrounding my abortion flew out and I was allowed to peer into those deep places of my heart and see what lay there was my broken and shattered heart. Nothing I could ever do would bring my child back, and the woman and I wept bitterly together.”

Susan’s pastor put her in contact with an abortion recovery group, which is where she ultimately found healing from the abortion and now she wants other women to know the truth of abortion trauma.

Adriana’s Story: “I was immediately regretting my decision”

Adriana was terrified when she became pregnant and thought that abortion was the best choice. She doesn’t recall how she got to the abortion facility or how she got home, but she does remember a man putting a mask on her face and him counting down until she was asleep. She was 13 weeks pregnant when she underwent a surgical abortion.

“The next thing I remember, I was in my bed, in my bedroom, sobbing,” she explained. “[…] I was immediately regretting my decision. I didn’t know that one of the symptoms of a post-abortive woman is to ask for another baby, and so that is what I did. I asked God to give me another chance to be a good mother.”

Adriana became pregnant again and gave birth to a son, whose existence helped her to cope with her abortion. She felt ashamed and regretful but was never able to grieve over the abortion, and she felt she didn’t have the right to feel bad. She was, however, very angry and overprotective of her baby.

It was at a March for Life that she heard a woman’s post-abortion story that would put her on the path to healing. That woman insisted that Adriana attend an abortion recovery program, and while Adriana didn’t think the program would help her, she realized she was being led by God. Today, she volunteers at a pregnancy resource center and is a part of several pro-life organizations. It is now her life mission to help women choose life for their own babies.

Adriana wants women to know that whether they choose life or abortion, their lives will change. But the only choice that involves regret is abortion. She explained that she has never had a woman call with regret over choosing life. But, she said, “I am heartbroken over all of the women who call sobbing and have so much regret for what they have done [through abortion].”

Nona’s Story: “It has been very traumatizing for me”

At 15 years old, Nona was date raped and soon realized she was pregnant. She and the boy had broken up, so she went to Planned Parenthood and was told she should have an abortion. They offered no other options, and told her that her baby wasn’t really a baby yet. When she told her ex-boyfriend, he denied being the father, which deepened her shame.

Nona decided to tell her sister about the pregnancy and her sister told her to have an abortion and convinced their mother of that as well. They didn’t want her father, an evangelist, to know. The pressure she got from her sister and even her friends pushed Nona to abortion, believing it was her only choice and that it was normal.

Alone in the counseling room, “I was told at that time, the lady said, ‘You are so young and you are so small that this abortion could probably cause you to never be able to have children in the future.’ And I was just in shock at that time and I wasn’t thinking about marriage or having kids or nothing, so it just didn’t even faze me what she told me. But I do believe that if my mom and sister were in there hearing that, that they would have stopped me from having an abortion.”

Nona wasn’t introduced to the abortionist prior to the procedure, and during the abortion, the staff told her to focus on the baby mobile hanging above the bed, but all Nona could focus on was the pain. She heard her mother came to the door looking for her, but the staff sent her away. Later, in the recovery room, she recalled that girls were screaming and crying and that she was bleeding so heavily she was likely hemorrhaging.

In 18 years of that marriage, she was never able to have children as a result of that abortion. She suffered five miscarriages, including three tubal pregnancies that required emergency surgery. She also suffered from breast cancer from the abortion, she said, adding more trauma to her life. Not being able to have children has been particularly heartbreaking.

“It has been very traumatizing for me to go through life not being able to have children. And going to baby showers is very difficult and seeing all my friends and relatives raise their kids and it’s been really hard,” she said.

Nona eventually reached out to an abortion recovery group for help and she was able to memorialize her baby lost to abortion as well as her babies lost to miscarriage. She wants women considering abortion to learn the truth about abortion and the damages that it can cause women physically and emotionally.

Mothers and fathers can all suffer the effects of abortion trauma. It destroys relationships and increases a woman’s risk of depression, anxiety, drug use, and suicidal thoughts. Yet abortion advocates continue to claim that women don’t regret their abortions and even produced a flawed study in an attempt to claim that 95% of women don’t regret their abortions. Yet groups like Silent No More prove others and more women are bravely stepping forward to share their abortion trauma and regret, sharing the truth so that other women can avoid the same fate.