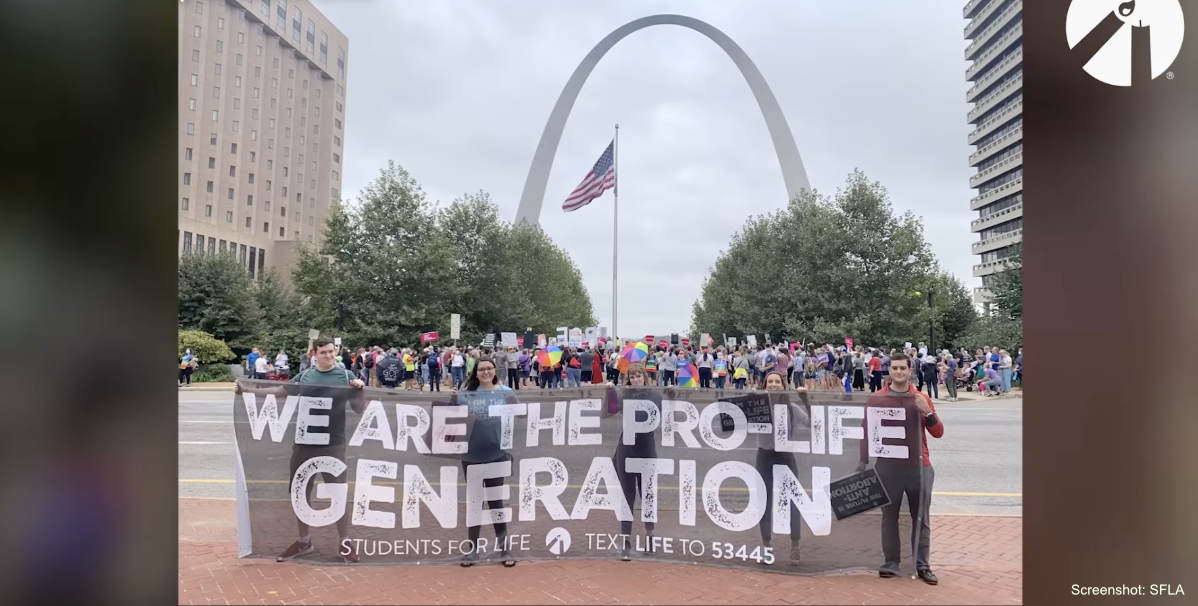 In just the past week, pro-lifers have assembled in multiple cities to particpate in the national 40 Days for Life Campaign, National Day of Remebrance for Aborted Children, and the annual Life Chain. In addition, pro-lifers in D.C. rallied for prayer at the Supreme Court, which is soon to hear an important case challenging Roe v Wade. But you’d never know all of this pro-life activism was happening, given the national media’s laser-like focus on the pro-abortion “Women’s March” focused on doing away entirely with protections for preborn human beings.

Women’s March organizers protested the recent passage of the Texas Heartbeat Act, which prohibits abortion once a preborn child’s heartbeat can be detected. They also focused on an upcoming Supreme Court case out of Mississippi, which centers around a Mississippi abortion law that restricts abortion after 15 weeks gestation.

The Women’s March on October 2 was planned in partnership with Planned Parenthood, an organization charged by its own staffers of having a “present steeped in white supremacy” and racism. The corporation has repeatedly covered for child sexual predators, even returning sexual assault victims into the hands of their abusers.

Abortion advocates at the Women’s March did not hide their desire to enshrine abortion, chanting slogans such as “abortion anytime, any reason,” “abortion is sacred,” “f**k Greg Abbott,” “bans off our bodies,” and “abortion on demand without apology.”  Late-term abortionist Susan Robinson was in attendance, telling an audience that “a person’s reason for wanting an abortion” is “irrelevant.” In other words, unfettered child killing, to the marchers, should be the law of the land — and this is what recent pro-abortion House legislation, endorsed by the Biden-Harris administration, would ensure.

While the march was labeled a “women’s march,” some attendees chanted slogans like “his body/his choice.” 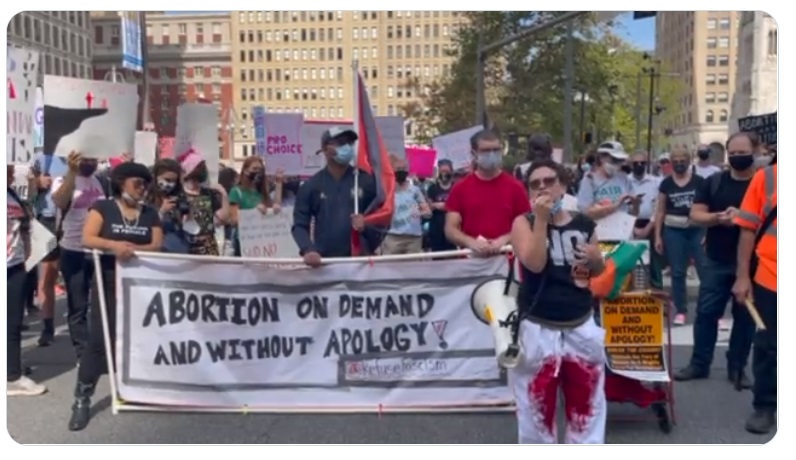 In an email sent to supporters of the Women’s March, attendees were asked not to do the following: 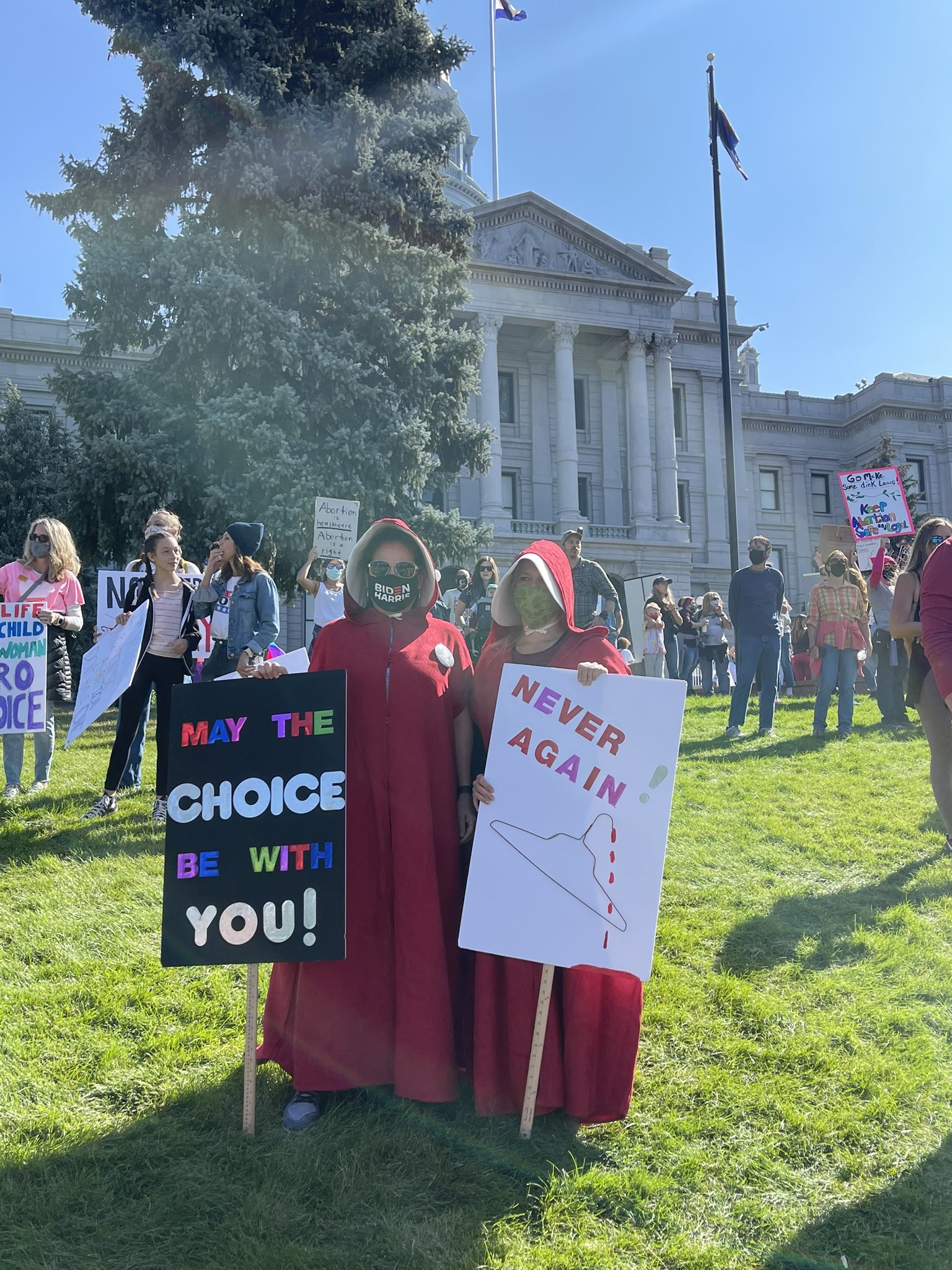 Despite the extreme messages, the national media seemed eager to promote the event even before it took place.

“Most of the previous marches have occurred in January, but organizers decided to host this year’s event in October to fight imminent threats to abortion access,” wrote the Washington Post.

While The Hill was critical of past leaders of the Women’s March with ties to an antisemitic “hate group,” the media outlet claimed in advance of the march that over “240,348 people have pledged to participate in the nationwide event.”

Of course, every year, the March for Life draws hundreds of thousands of people to Washington, D.C., with mainstream media’s coverage of the event remaining a fraction of their coverage of pro-abortion demonstrations.

The glaring pro-abortion media bias over the past week has been no different, and it caught the attention of several pro-life leaders who called it out.

A Twitter post by Janet Morana, co-founder of the Silent No More Awareness Campaign (which increases public awareness of the devastation of abortion to those who participate in it) read, “Dear @NBCNews @MSNBC @JoyAnnReid @nytimes @washingtonpost– read your stories about House women and #abortion but where are you every year when women of @regretabortion tell theirs? #fridaymorning” 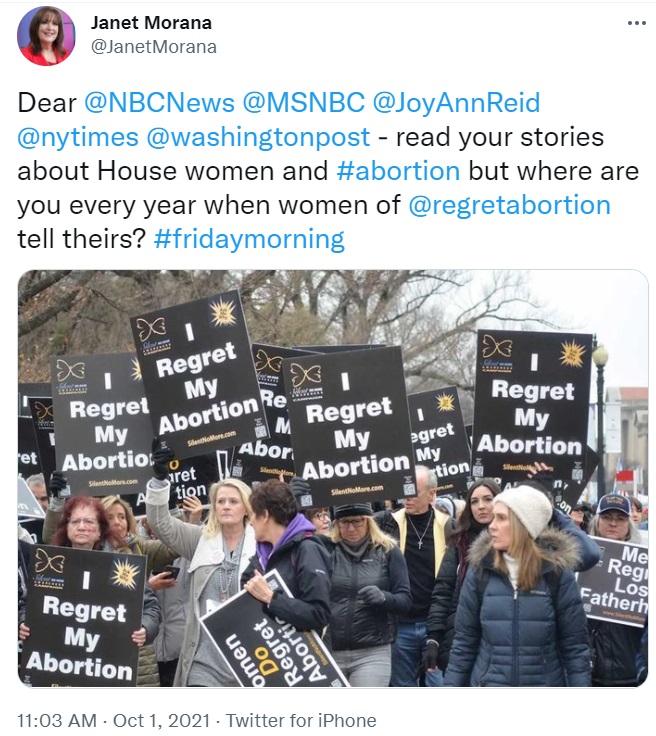 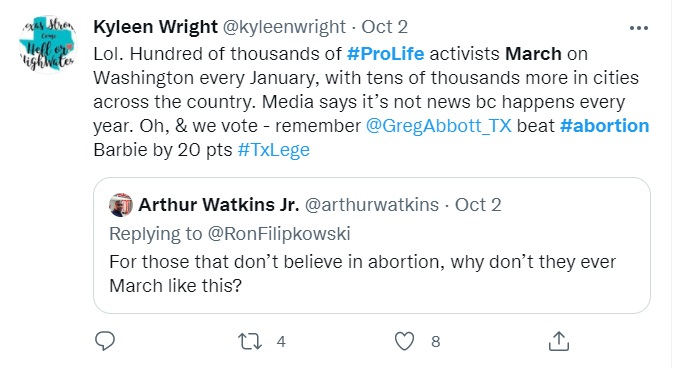 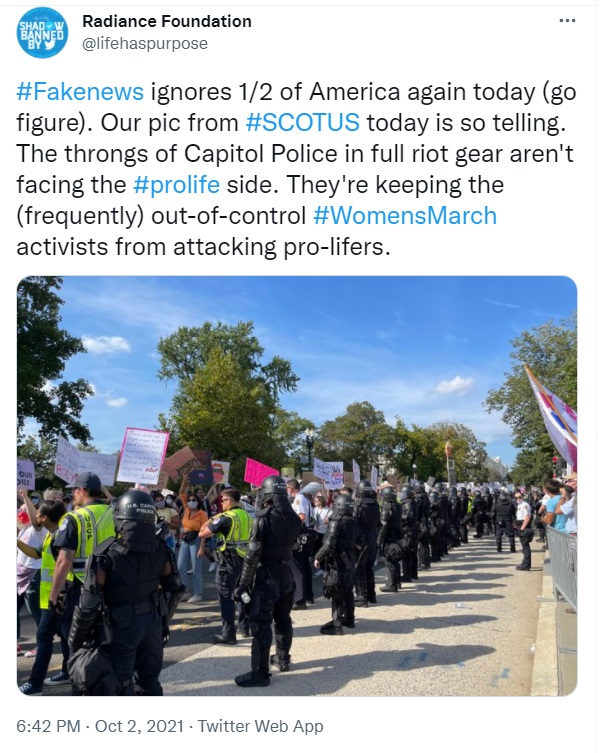 Women’s March… for certain women only

As in years past, the so-called “Women’s March” was not inclusive to all women. A tweet by the Susan B. Anthony List pointed out how “the Women’s March has a history of excluding women who speak out against the human rights abuse of abortion.”

“Every woman deserves to be heard on this issue,” SBA List added. “But the Women’s March tries to erase the stories of moms who chose life in difficult circumstances.” 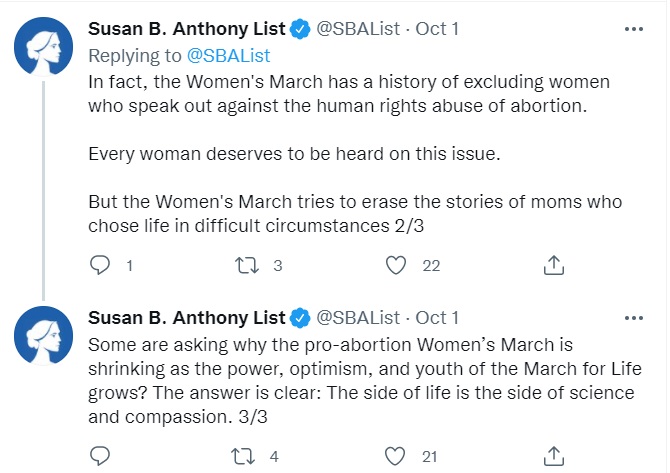 Students for Life of America (SFLA) president Kristan Hawkins made this point loud and clear in a tweet which read, “The #ProLife movement is at its core for the empowerment of women — but our #WomensMarch application was rejected. Sadly, abortion corporations have overtaken any discussion of women’s rights in our country. Either way, we’ll continue to fight for ALL women. #WomensMarch2021“ 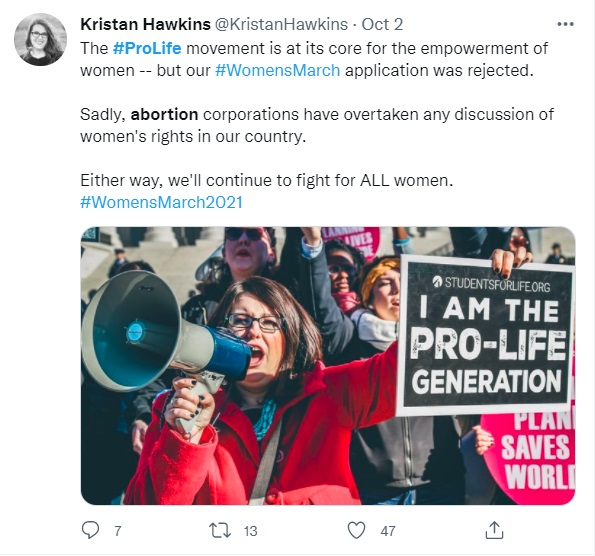 But that did not stop pro-lifers from getting their message out.

According to a report by SFLA, pro-lifers opposing the abortion “justice” march faced threats of violence and even assault. The group documented how abortion supporters shoved a woman who was eight months pregnant, hit pro-life students in the head, or knocked them to the ground. Others endured threats of rape and various forms of assault.

Former Wisconsin governor Scott Walker noticed the violence, tweeting, “One of the @StudentsforLife  activists was shoved down the steps at the state Capitol in Denver. Outrageous!”

All across America, pro-lifers were engaged

After showing up in multiple cities. SFLA claimed on Twitter to have “countered the pro-abortion (& sometimes violent) @womensmarch with a message of empowerment and LIFE.”

A March for Life also took place in in Wisconsin following another first of its kind March for Life event in Pennsylvania where a very large crowd attended.

Even in Mexico (and here) and other locations across the globe, pro-lifers gathered to speak out for the lives of the preborn.

Pro-lifers in South Bend, Indiana, in Nebraska, in Canada, and in Virginia participated in the Life Chain events across multiple cities. Prayer gatherings took place outside the Supreme Court and are expected to continue through the next few months.

The Purple Sash Revolution held a large prayer gathering at the Supreme Court, involving over 30 pro-life organizations. Organizer Rev. Patrick Mahoney noted on Twitter, “Nothing is as powerful as prayer & worship as our prayer rally kept 10,000 pro abortion demonstrators off the Supreme Court sidewalk…”

Every single week in America, pro-life activists and sidewalk counselors gather outside abortion facilities, including Planned Parenthood, to offer help and hope to mothers in need and to be a witness to the evil of abortion. This past weekend was no different. 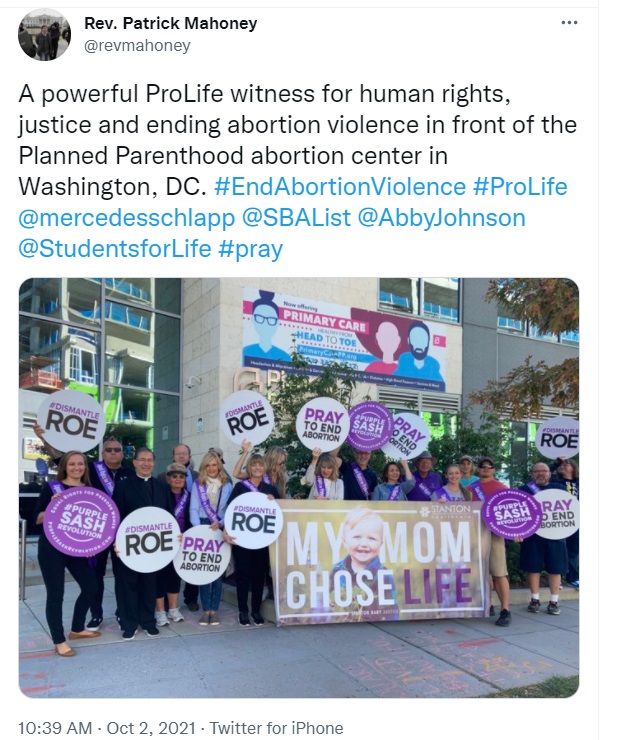 And while a pro-life presence outside abortion facilities is fairly regular, pro-lifers in cities across the nation and globe are particpating in the fall campaign of 40 Days for Life which has already seen 135 babies saved from abortion.

But people aren’t likely to read about this strikingly large number of pro-life individuals in the media, which chose instead to highlight those who gathered to celebrate and promote the deaths of thousands of innocent children daily, in the name of “women’s empowerment” and so-called “abortion justice.”