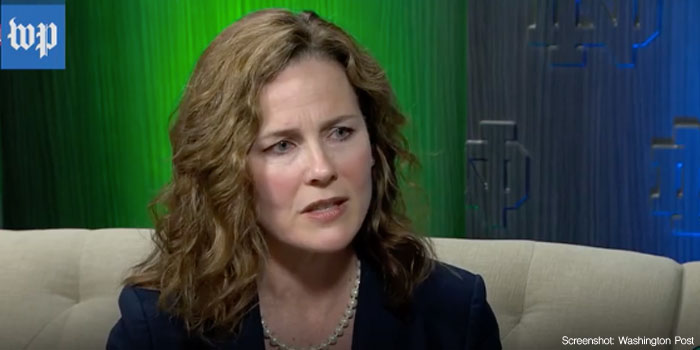 Amy Coney Barrett is a Catholic mom of seven children, including two adopted from Haiti and one with special needs; she’s also a judge on President Trump’s shortlist of nominees to replace Justice Anthony Kennedy on the Supreme Court. To sum it up: Barrett should be considered the picture of true feminism — but pro-abortion feminists want her gone.

During the 2016 presidential campaign, American women were told that there was a special place in hell for them if they didn’t vote for Hillary Clinton. Now, women are being told there is a special place in hell for any woman who votes against so-called abortion rights. If you’re a woman and you believe abortion is the destruction of innocent human life, you are considered the enemy. Barrett is Catholic and against abortion — and that is the problem for pro-abortion feminists.

These feminists believe it’s impossible to be a pro-life feminist. They often present the ideas of pregnancy and motherhood as obstacles to true success. Why else would they say women “need” abortion in order to earn their degrees and climb the corporate ladder to success?

But Barrett stands as proof that children are not stumbling blocks on a woman’s path to success.

READ: Can you be a pro-life feminist?

Editor and podcast host Courtney Enlow recently wrote a guest piece for The Huffington Post, claiming that if GOP women “truly supported women, they wouldn’t be so hellbent on destroying reproductive rights.” But when killing innocent humans is considered a right, this is a problem. As the pro-life group New Wave Feminists notes: “When our liberation costs innocent lives, it’s merely oppression redistributed.” Abortion has been wrapped up in feminist clothing for so long that women have been trained to see and accept it as such. Abortion tells women they aren’t good enough or smart enough to have it all. Abortion is not pro-woman.

Women can absolutely support other women and be against abortion. Tell women all the things they supposedly can’t do isn’t supportive: “You’re too young. You’re too old. You can’t be a mom and go to school. You can’t be a mom and have your career.” Instead, being supportive is saying, “You’re unexpectedly pregnant and scared, but you will be okay. I will help you. You don’t have to sacrifice your child’s life in order to achieve your other dreams.” Being supportive is asking why a woman feels she must abort, and then working to solve those problems rather than destroy the child’s life, which will leave her exactly where she was, but with a dead baby.

Since Barrett’s nomination to the Seventh Circuit Court of Appeals last year, she has been attacked for her conservative beliefs, including her Catholic faith and larger family. Sen. Dianne Feinstein said during Barrett’s Seventh Circuit hearing that she was “controversial” because “many of us that have lived our lives as women really recognize the value of finally being able to control our reproductive systems.”

Perhaps Sen. Feinstein doesn’t realize that abortion does nothing to “control” reproductive systems. Abortion intentionally destroys the life of another human being. Feinstein infamously added, “the dogma lives loudly within you,” referring to Barrett’s Catholic faith — a soundbite that can now be found on coffee cups and t-shirts.

The media tells society that Catholics and pro-life Christians in general are judgmental and only care about babies before they are born — and sadly, many Americans in general only know what the media tells them about these groups of people. And this information is always given a certain slant, much like the media’s reporting on Planned Parenthood. Catholic Charities USA is one of the largest charitable groups in the country, landing at number 11 on Forbes’ list of 100 Largest US Charities for 2017. And the Catholic Church does not discriminate when it comes to whom they help. They provide refugee services, disaster relief, affordable housing, and even work to help end family separation at the border. But since the Catholic Church is solidly against abortion, all of these deeds are ignored by the media.

And since Barrett is Catholic, abortion proponents want to keep her off the Supreme Court. Barrett’s life stands in direct opposition to the lies that modern feminism has sold to women.

True feminism seems to have abandoned the United States, and in its place, we have a feminism that leaves room strictly for women who believe they can only reach success by killing their own children.